A bearded George Michael before Wham! came along: Captured on 20 February 1981 with his eye on the Nationwide TV camera, among many familiar faces at Soho’s Friday night Beat Route – where the Caribbean beach decor was to inspire his song Club Tropicana. (Photo BBC)

◼ THIS ENTIRE WEBSITE CELEBRATES the Swinging 80s when UK subcultures were uniquely re-shaped by the youngest generation since the 60s to create new sounds and new styles in music, fashion and media. George Michael, who died this week, was one among hundreds of inveterate Soho clubbers, except that in his own mind he was a global superstar. Yet before the teenaged George and his schoolmate Andrew Ridgeley signed to Innervision as Wham!, there were several false starts to their career, not least being turned away from the Friday-night Beat Route during its coolest-club-in-town heyday when gatekeeper Ollie O’Donnell decided the boys from Bushey looked just too suburban. The Soho elite of 20-somethings who ran the new club-nights and managed the cool new image bands were very protective of their post-Romantic projects. George was however fly enough to use his contacts behind the bar to ensure he was on the dancefloor during the BBC Nationwide filming for a Spandau Ballet package in February ’81, when he clearly had the camera in his sights.

The irony was that by the next year Wham! were pushing a glossy brand of unashamedly “pure pop” that was so new, the debut single Wham Rap! failed to chart when released that June – the BBC declined to playlist the number partly because of its “anti-social” lyrics. After a touch of retuning, four months later Wham! released Young Guns (Go For It!)  and this time their hedonistic attitude – mixing humour with social conscience – clicked with the clubland audiences that were growing all over Britain.

A lucky break got them onto Top of the Pops in November when the group came as a shock to the eyeballs. The vocal foursome were immaculately rehearsed. Chinese-slippered George held himself like a star, bare-chested and sporting a leather waistcoat while Andrew and backing singers Shirlie Holliman and Dee C Lee stepped out with panache, all fully choreographed down to their finger-points and slippered toe-points. Then whoosh. Wham! rocketed to No 3 in the UK singles chart in December, the next three singles all made the Top 10, and the Bushey boys graduated to the international A-Team of British superstars. The next four years turned out 25 million albums and 15 million singles and scored four US number one hit singles.

It was evidently an advantage that all four members of Wham! had emerged as faces among London’s clubland soul tribes, the dance-crazy cognoscenti who banished rock from the singles charts during 1980-81 and provided an eager audience for new music. Some of them can be seen in the music video for Young Guns shot by Tim Pope at the glitzy Churchill’s club in Piccadilly.

Pop journalist about town Paul “Scoop” Simper recalls first meeting Wham! in autumn 1982 while working for Melody Maker. In his forthcoming autobiography, Pop Stars in My Pantry, he writes:

“ George told me: “I loved dancing at Le Beat Route. Nobody gave a fuck who I was so you could throw yourself around. If Shirlie was with me we’d really do that pair dancing. It was cool. We’d always make a bit of space and really show off.”

There’s footage from a BBC Nationwide report on the club which appears in Spandau Ballet’s Soul Boys of the Western World movie showing a bearded, curly-haired George in an alarmingly orange suit slap bang in the middle of the dancefloor [pictured at top] from a time when he was still in a ska band called The Executive, before Le Beat Route’s playlist helped transform them into Wham!

“Andrew and I were at Le Beat Route when Andrew started going ‘Wham! Bam! I am a man!’’ and doing this terrible rap,” said George. “It was supposed to be funny. But that’s where he had the idea. ”

➢ Read Simper’s full chapter on George at Unbound, the publisher’s website, and pre-order your copy of PSIMP

It was the Beat Route itself – actually, its Caribbean beach decor – which was to inspire George’s song Club Tropicana and for more than two years O’Donnell’s Friday-nighter set the benchmark for the coolest sounds anywhere in Soho with 22-year-old deejay Steve Lewis ruling the turntables.

On an inside page, Soho’s young guns remember their pals in Wham! – led by…

Paul McKee, admin for Soul Boys Soul Girls at Facebook – “RIP George Michael – A regular at our clubs Le Beat Route, Wag, Bogarts and many others. Easy to forget now the impact Wham Rap! Had. It was not out of place at the time in 1983 when the likes of Funkapolitan, Spandau Ballet, Culture Club, who all came from our clubs, began producing great club records, as the Soul Boys and Soul Girls sound and styles began to change. When Wham! performed Young Guns on TOTP with that dance routine, we all noted some of those little moves he used, we’d witness at a club at any given weekend. Without doubt one of the greatest soul voices and songwriters this country has ever produced. He liked to club like the rest of us, George was one of us.”

➢ Previously at Shapersofthe80s:
Britain stunned by sudden death of George Michael, our biggest pop superstar of the 80s

➤ Escape to the Nightlifers’ Shangri-la just in time for Christmas 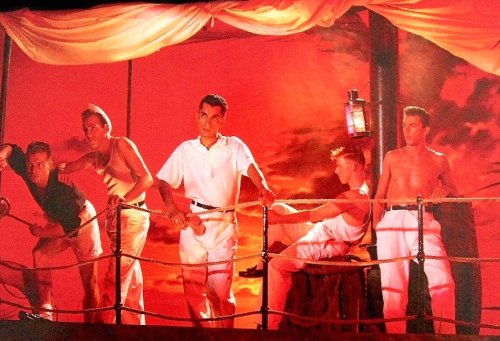 ◼ REMEMBER SNAKE-HIPPED ANDY POLARIS, frontman for Animal Nightlife, the soul/jazz/pop socialist collective who emerged from London’s cool clubbing scene and charted with Native Boy in 1983? This week their debut album Shangri-la is re-issued in a deluxe two-CD edition, having charted in summer 1985 only on vinyl.

Andy says: “It comes with a bonus disc of remixes and a great booklet with retro photos of the band in its two phases. Just in time for Christmas. The vinyl album has long been deleted and since then a very poor compilation of songs was released. The re-issue’s  tracks consist of the album in its original form and a second CD containing other singles and extended remixes that were only available on 12-inch before.” Lois Wilson supplies some nicely informed sleeve notes identifying Animal Nightlife’s role as innovators when the UK’s thriving underground changed the face of nightclubbing.

“Just listen to the Pink Panther style
saxophone of instrumental Basic Ingredients
and try not to lose yourself momentarily
in another world, a better world even”
– First review (7/10) by Loz Etheridge

Managed by Steve Lewis, London’s coolest club deejay in the Beat Route’s heyday, Nightlife’s swing sound with an electronic twist enjoyed its moment as the hippest trend in music while Polaris penned his own brand of torch song and the band wore head-to-foot styles from Bolshevik bolshieness to Johnson’s jazz-age retro. Rabid clubbers must remember how Nightlife’s crazy animalettes and animalads went through about 35 line-up changes during their eight years on the scene, sadly scoring only four chart singles. For some band members, good times tended to take precedence over naked ambition in those highly competitive years when British acts were storming international pop charts.

“The must have re-issue CD of 2016.
A perfect Xmas stocking filler”
– deejay Mark Moore

By 1985 the band had slimmed down to the five-piece pictured on the CD cover. They consisted of Andy Polaris (vocals), Leonardo Chignoli (bass), Paul Waller (drums), Steve Brown (guitar) and Billy Chapman (playing a thrilling saxophone). After switching from the finger-snappy Innervision label to supercool Island Records, they were all packed off to Philadelphia where the first album was recorded at the legendary home of Philly World Records.

“The label wanted a bit more discipline from us,” Andy says, “and they sent us to America to get us out of our element and into the hands of those seasoned veterans who’d created the fabled Philly sound. We five working-class boys from London were wide-eyed and just did everything they told us. It paid off, because after our sojourn at Philly World our urban jazzy feel translated into a more sophisticated British club sound.”

➢ Polaris recalls his impressions of recording with the Philadelphia greats

➢ Definitive yet unofficial Animal Nightlife band history created online by Mike Albiston, a fan who remembers their last gig and senses something’s afoot that might require a web update