“7pm, 1st Oct 1980, 30 years ago today, I opened my first
hat salon in Covent Garden, with the fabulous Kim Bowen and the super talented Lee Sheldrick (R.I.P). Thank you all, it’s been an amazing adventure! Xs” 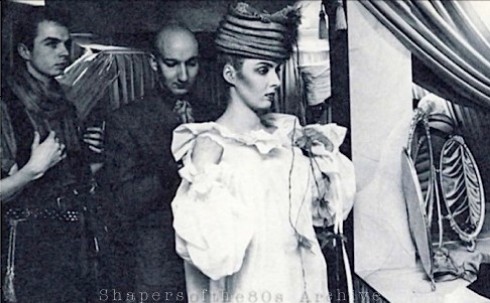 ❚ FROM 1978 HELEN ROBINSON HAD MADE HER SHOP PX the flagship for New Romantic ready-to-wear in James Street, Covent Garden, all velvet suits, Robin Hood jackets and hippy frills. In February, 1980, it moved a few yards round the corner to bigger premises in Endell Street. Since his graduation from St Martin’s in 1979, Stephen Jones’s uncompromising hats had made the perfect accessories for the excesses of PX so Robinson and partner Stephane Raynor made space in the basement for Jones’s own hat salon. He says: “To get the finance I sold my car, an ex-GPO mini-van, for £150, and that’s how I started the business.” Blitz club-host Steve Strange was a regular customer. Inevitably, the whole place became a social centre for fellow Blitz Kids, the clubbing fashionistas who were by then regular faces in fashion pages and gossip columns. Stephen’s wittily titled “First Collection” was previewed on October 1 and commissions came in from the New Romantic pop groups Visage and Spandau Ballet who were releasing debut records that autumn, from Grace Jones and, later, Boy George. 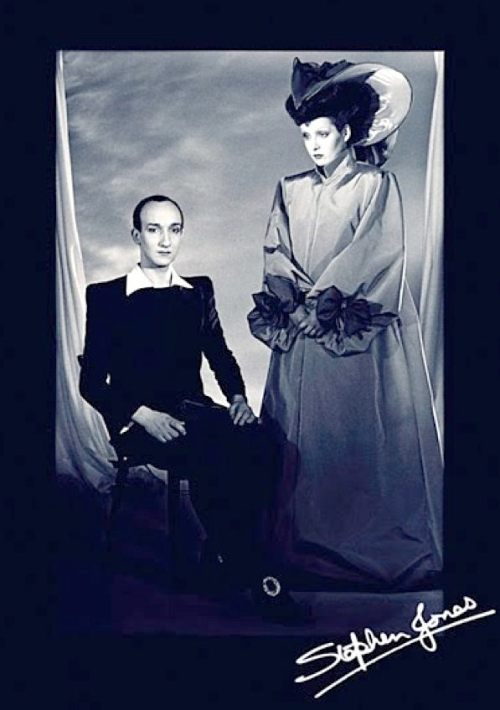 Stephen Jones and Kim Bowen, dressed by PX, topped out by Jones, 1979: business card for the milliner and his mannequin de vie. Photographed © by Peter Ashworth 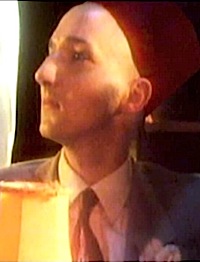 With the dawn of the 1980s, Britain’s outlandish street styles drew the attention of the world’s leading fashion tastemakers who had to start taking London Fashion Week seriously, to the benefit of a new generation of designers and established names alike. The sheer wit and chutzpah of Stephen Jones millinery played brilliantly to both marketplaces and with Diana Spencer’s marriage to the Prince of Wales the Princess became an international icon for classic British elegance, and a huge fan of the quixotic Jones look. Though he says now that he never drew up a career plan, he did enjoy one lucky break after another: “I had a phone call one day from Vogue who were coordinating a wardrobe for the Princess of Wales and I made quite a few hats for her early on.”

Culture Club’s phenomenal global appeal also established Boy George as Britain’s alternative fashion icon. In another stroke of fate, Jones says that it was his red fez worn while sitting in the audience during Culture Club’s first video, Do You Really Want To Hurt Me (filmed in Soho’s Gargoyle club in 1982), that caught the attention of the French designer Jean-Paul Gaultier. Two years later Jones went to design hats in Paris for Gaultier who was building his own reputation as an enfant terrible. He says now: “Working in Paris then was slightly akin to sleeping with the enemy, and I got gyp from the British Fashion Council who didn’t approve.” 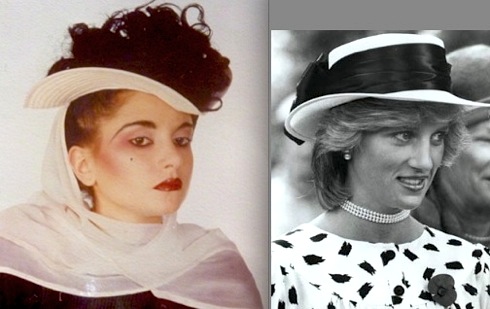 Jones’s familiar bald dome came about after he shaved his head as a crazy gesture, only to discover that it was the same size as the average milliner’s model, which is normally a wooden block, and ever since he has played the role of his own hat mould. Jones’s favourite show was his first for another designer, Zandra Rhodes in 1981. “It was huge — extravagant production, hundreds of models, over the top make-up, vertiginous shoes, tantrums, tears. I loved it.”

His reputation soared in the early days on the coat-tails of such provocateurs as Vivienne Westwood, Claude Montana and Thierry Mugler. When in 1996, the younger St Martin’s superstar, John Galliano, crossed the Channel to design for Christian Dior, the fashion world was amazed. Within minutes, he had invited Jones to join his team and be the milliner at Dior. As Galliano’s dreams became the stuff of legend, his runway shows became ever more spectacular, while the Jones confections reached new heights of extravagance.

Jones declares: “Just as accents in language lead to the correct reading and rhythm of a text, my hats add the appropriate punctuation to a designer’s fashion statement.”

Today style-icons crave to wear Jones — think of Gwen Stefani, Beyonce Knowles, Kylie Minogue, Alison Goldfrapp — while yet more of the world’s cutting-edge designers commission his creations to enhance their collections. Today they include Rei Kawakubo, Comme des Garcons, Azzedine Alaïa, Loewe, Giles Deacon, Kinder, Issa, Donna Karan, Jason Wu, L’Wren Scott and Marc Jacobs. Back at his Georgian London boutique a few doors along from the former Blitz club, Jones also designs the Miss Jones and JonesBoy diffusion ranges in addition to his Model Millinery collection. “My British milliners are the best in the world,” he maintains. “The hat is a certain British thing that people do love wearing.” 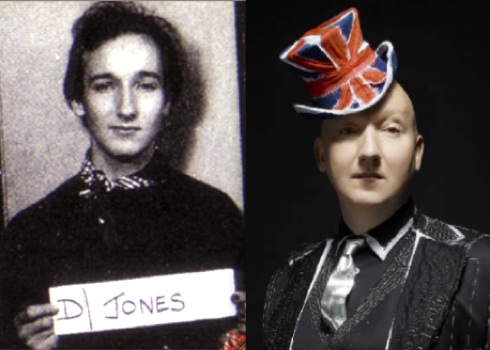 Then and now: Stephen Jones enlists as a student at St Martin’s 1976, and curates a show of landmark designs at the V&A museum 2009. Union Jack top-hat photographed © by Justine

Last year London’s Victoria & Albert Museum staged a huge exhibition entitled Hats, An Anthology by Stephen Jones, which attracted 100,000 visitors and has since set off on a world tour. This summer he has been working on Sex and the City 2, and told Vogue.com that he had been recruited by Madonna for her latest film, W.E., based on the life of King Edward VIII (played by James D’Arcy) who in 1936 gave up his throne for the American Wallis Simpson (played by Andrea Riseborough). “Madonna is directing it and she asked me to do the hats. Somehow I’ve ended up starring in it, too.”

This autumn Antwerp’s Mode Museum (MoMu) is hosting a solo exhibition of 120 hats, Stephen Jones & The Accent of Fashion (Sept 8-Feb 13, 2011), plus his work in film, music and photography. He explains the magic of the titfer: “A hat makes clothing identifiable, dramatic – and most important, Fashion … It’s the dot on the i, the exclamation mark, the fashion focus. Everyone from showgirls to dictators knows that by wearing a hat they will be the centre of attention.”

The crowning glory for 30 years of dotting the i’s came this spring when Her Maj the Queen recognised the mad hatter’s achievements by appointing him to the Order of the British Empire. Hats off to the Age of Jonesmanship! 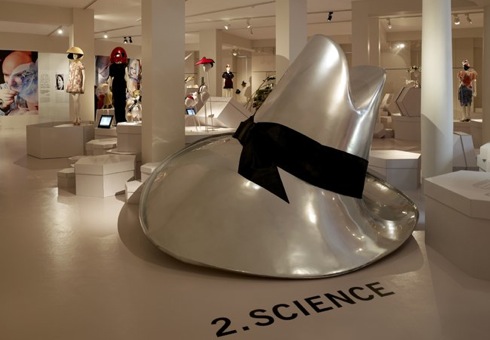 ➢ VIEW an i-D video at the Antwerp show in which Jones declares:

“At school science was my best subject. Millinery combines physics and art together in a weird mix — you can’t have one without the other.”

➢ Detailed interview with Stephen Jones in Antwerp for the Independent 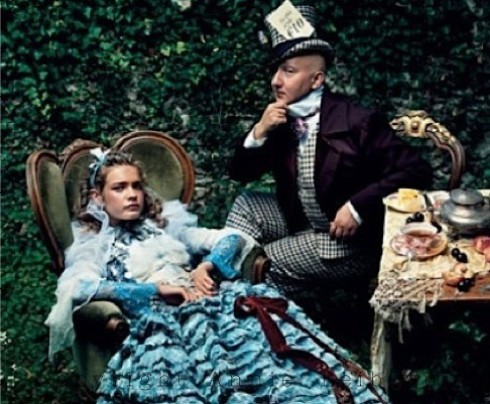 His sobriquet fulfilled by photographer Annie Leibovitz: Stephen Jones as the Mad Hatter in The Mad Tea Party (detail), one of a series of Alice in Wonderland tableaux shot for American Vogue, December 2004 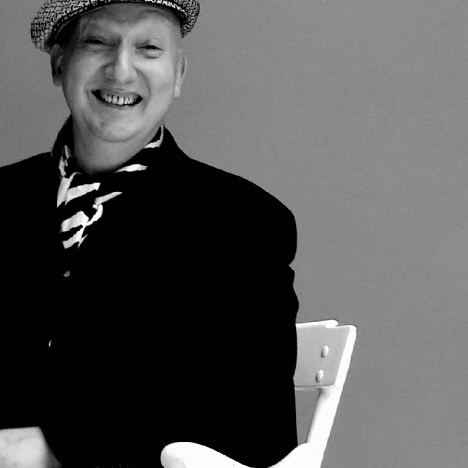 ❚ UPDATE — STEPHEN JONES DISCREETLY MENTIONS A CHARMING, frank, gossipy and self-effacing interview with him which has just popped up on Showstudio (despite being dated May) and, as if by telepathy, addresses many questions begged by the brief Shapers outline above! “Steve Strange was, apart from my Mum, my first paying customer” … “I appear to have reinvented the world of millinery but I didn’t have a grand purpose like that at the beginning. I just wanted to go to a great party.” Who is this perceptive young interviewer Alex Fury? With a name like that he will go far.
➢ Video: Stephen Jones interviewed for Showstudio 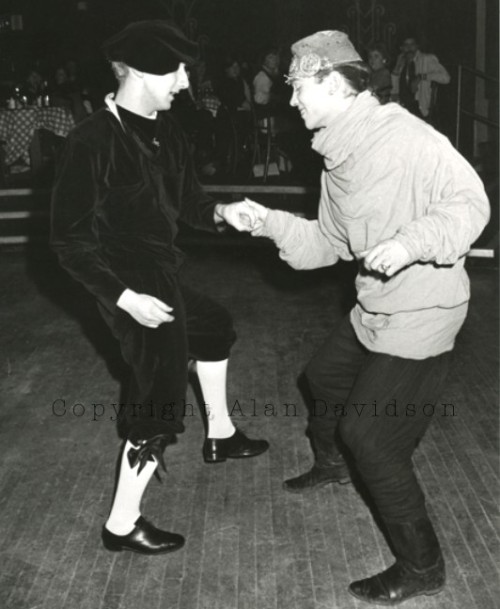 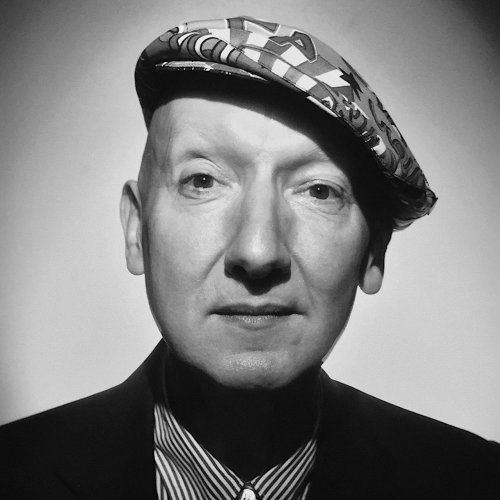 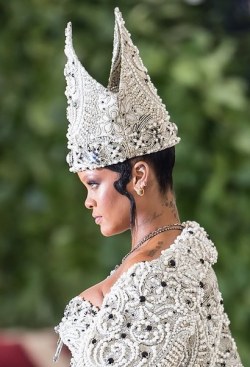 “ It’s 40 years since Stephen Jones – one of the fashion industry’s most prolific and inventive milliners – entered the hat game. Does it feel like yesterday? “No it doesn’t,” the 62-year-old replies. “It definitely feels like I’ve had a career doing this. But the thrill and the terror of making a hat is just the same as when I started.” Why the terror? “You’re dealing with a piece of white paper, you’re working with a [insert: often world-famous] client, a high-profile designer, and you do learn how [to do it], but in a way you don’t because every hat is opening night. . .” / Continued at Vogue online