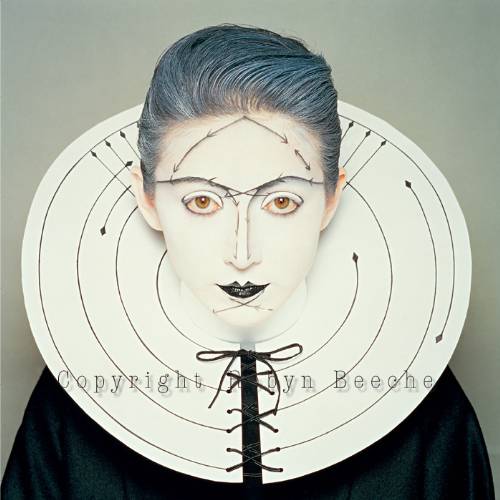 ❚ THE BLITZ KIDS WERE TYPICALLY aged around 20, the first children of the age of mass television, wise in the ways of the visual media. They set out to subvert those realms the young know best, music and fashion – both realms having acquired fust and dust during the grim 1970s. From their own underground scene streetwise soulboys and girls came out to dance. From London art-schools stepped fashionistas with an eye for a cool silhouette. As the last of the socially aware Baby-Boomers, these individualists were all eager to reinvent trendiness in the post-punk vacuum.

A full decade before the internet came along, and even longer before social media, fashion itself suddenly gave way to the expression of “style” across the creative arts. Increasingly theatrical pop videos provided a vehicle for experimenting with costume, graphics, photography. The same went for high-street ready-to-wear once selected nightclubs began offering runways on which teens with limited means could dazzle. The writer and professor of fashion Iain R Webb has said: “A ragbag of clothes became the visual soundtrack to our lives. The 1980s were all about being photographed. We dressed as if every day were a photo shoot and every night a party (it usually was).”

Nightclubbing itself declared The Pose Age well and truly open. On Tuesdays at London’s Blitz Club you found here Lady Ample Eyefull, there Sir Gesting Sharpfellow, lads in breeches and frilly shirts, white stockings and ballet pumps… girls as Left Bank whores or stiletto-heeled vamps dressed for cocktails in a Berlin cabaret, all in the mix with wicked witches, kohl-eyed ghouls and futuristic man machines. 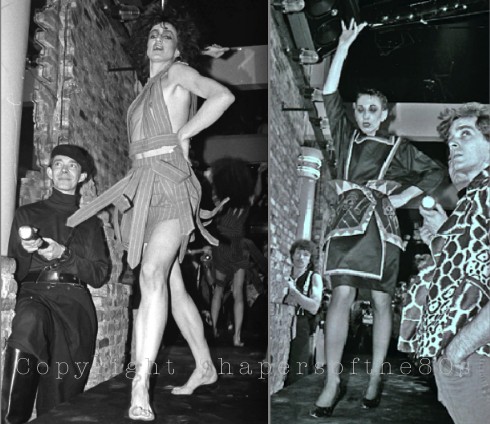 When Steve Strange eyeballed you at the door of the Blitz, your look alone did not guarantee admission. He did not want passive consumers but, in his words, “people who created unique identities”. Attendance became a statement of intent – to lead a life of style seven days a week.

That’s why dressing up at the Blitz became an act of affirmation. Milliner Stephen Jones has said: “It wasn’t about being fashionable – one looked for the approval of one’s friends. If we were going out to the Blitz, we’d probably start getting ready two days in advance.”

Fashion student Chris Sullivan – later to become Wag club supremo  – not only took Bowie at his word to become “heroes just for one day”. He summed up the Blitz Club style with the golden rule: “One look lasts a day.” The impact on the music circuit was registered by the astute photographer Derek Ridgers: “Almost overnight, the audience became more photogenic than the bands.”

Queen of the Blitz, Kim Bowen, with Stephen Jones in 1979: both wear PX, Kim topped out by one of his creations. (Photo © Peter Ashworth.) In the heart of Covent Garden, Helen Robinson and partner Stephane Raynor’s PX shop soon established itself as the home of New Romantic ready-to-wear. Since his graduation from St Martin’s in 1979, Stephen Jones’s uncompromising hats had made the perfect accessories for the excesses of PX so the partners made space in the basement for his own hat salon. Blitz Club host Steve Strange was a regular customer and the whole place became a social centre for style-conscious Blitz Kids. The sheer wit and chutzpah of Jones millinery played brilliantly to both clubland stars and smart conventional buyers including Princess Diana who became an international icon for classic British elegance, and a huge fan of the quixotic Jones look. He maintains: “The hat is a certain British thing that people do love wearing.”

SIMPLICITY OF THE WILLY BROWN LOOK 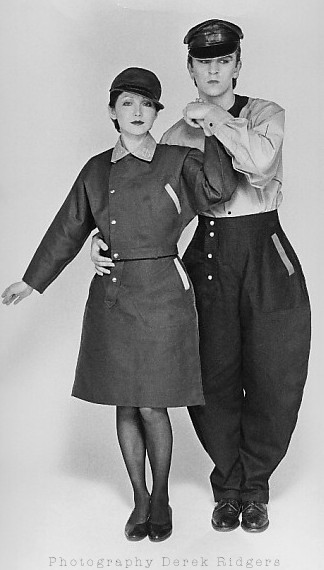 King of the posers: London club host Steve Strange with Vivienne Lynn, both in workwear by Willy Brown. His Modern Classics were given a runway show at the Blitz Club in 1980. (Photo © Derek Ridgers.) Brown sold his designs in his own shop in Shoreditch, London, and became an influential, independent designer and retailer who dressed, among others, David Bowie and Spandau Ballet. He began making clothes at home in small runs after failing to be accepted for a BA course. Vivienne became the first and most loyal customer of what he described as “a mail-order catalogue of separates, clothing units one could juggle to create individual statements”. His considered designs follow clean, simple, utilitarian lines, some making reference to Constructivism. Fine details catch the eye on collars, cuffs and pockets. 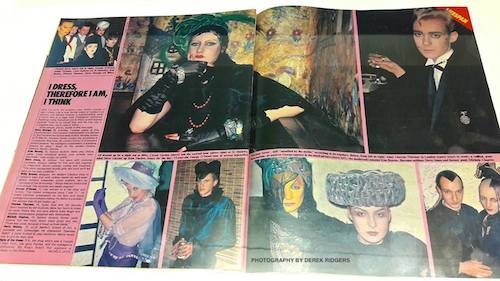 Sharp-eyed street photographer Derek Ridgers captures the Blitz Kids in their eccentric glory for the Sunday Times Magazine in April 1980. Writer Michele Jaffe declares the code of the Blitz Kids to be dressing up to express yourself, with only one rule: not to copy or to follow. Fashion student Kim Bowen declares that “Hats dictate my outfits”. At 17 George O’Dowd wears Leichner greasepaint on his face and says: “I’ve looked outrageous since I was 11.”

EACH RECALCITRANT TO THEIR OWN, 1980 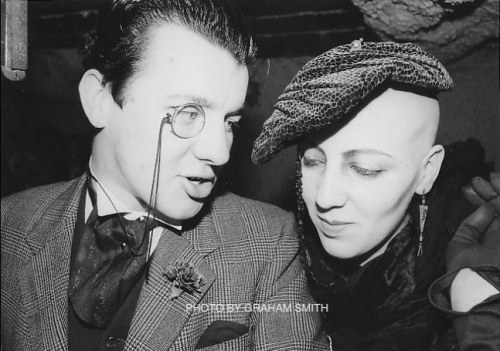 Fashion students Chris Sullivan and Michele Clapton: accessories for him include monocle, buttonhole, cravat and wing-collars and his mantra is “One look lasts a day”. Michele says “Punk was good because it freed us from limits” and her shaved head proves the point . . . Chris went on to run the Wag club for 19 years while these days Michele designs costumes for such TV series as Game of Thrones. (Photo © by Graham Smith)

SPANDAU SETTING THEIR OWN TRENDS, 1980 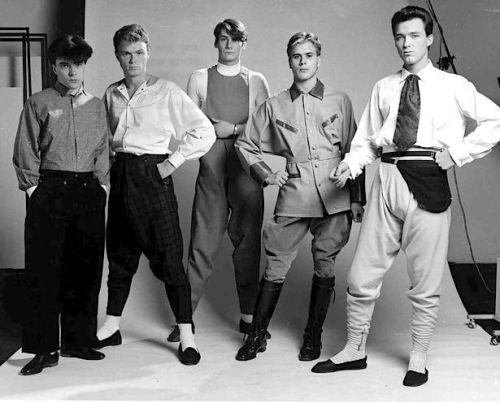 The Blitz Club’s house band Spandau Ballet in the studio for a shoot in 1980: their looks are improvised from Blitz trends, Willy Brown and Simon Withers with Chinese slippers in the majority. . . Dylan Jones, former i-D editor, today editor of GQ UK, insists: “It is impossible to stress too highly how achingly fashionable Spandau Ballet were in the winter of 1979 and the summer of 1980.” (Photographer unknown) 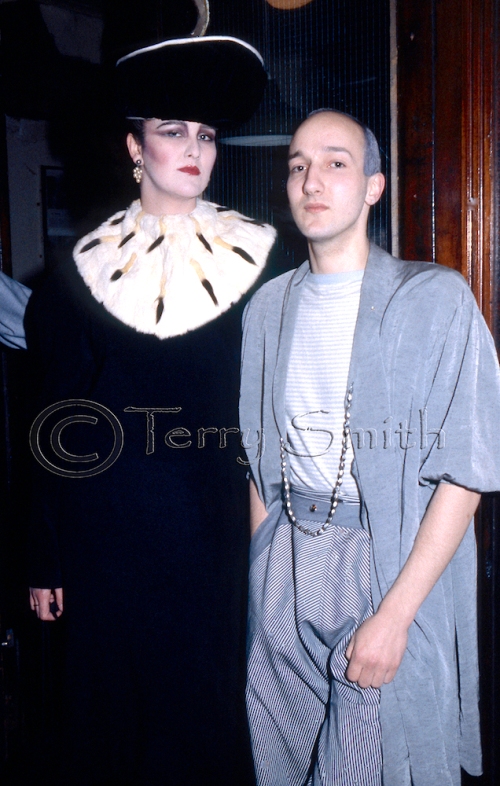 We are Fashion: St Martin’s student Fiona Dealey made clothes as bravura statements and says: “Dressing for the Blitz was real theatre. It wasn’t just another uniform. You felt glamorous” … Milliner Stephen Jones says: “I’d find people at the Blitz who were possible only in my imagination. But they were real.” (Photo © Terry Smith)

REFUSENIKS STAKE THEIR OWN CLAIM, 1980 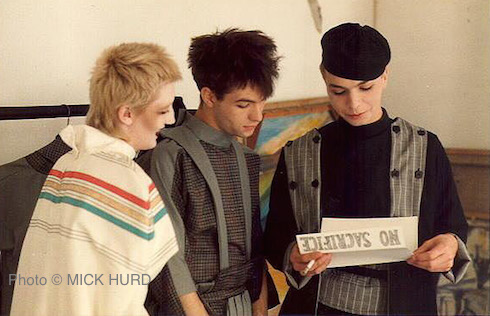 Tabards in August 1980: St Martin’s graduate Iain R Webb – one day to become fashion editor of The Times – organises a modest runway show for art-school refuseniks such as Melissa Caplan. Here at Chelsea’s Chenil Gallery her Pallium Products are modelled by Blitz Kids Myra, John Maybury and Lee Sheldrick. The show was titled No Sacrifice, “like the shout of the Red Army Faction”. (Photo © Mick Hurd)

I-DENTIFYING STYLE ON THE STREET, 1980 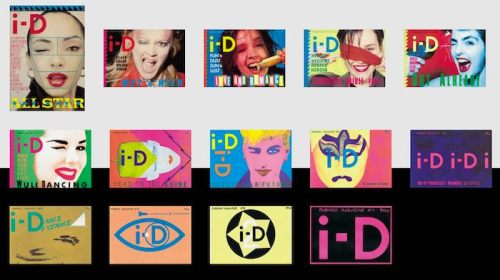 i-D magazine launched in September 1980 as a Manual of Style, relying courageously on “straight-up” photos of people who stood out on British streets and described the ingredients of their look. By its 14th issue in 1983, i-D abandoned its cheaply produced and stapled fanzine format and declared itself a fully fledged fashion magazine. (Images from covers.i-d.co)

Proof you can never be too trendy: only seconds before squeaky Dick Breslaw was to become famous for being Boy George’s little gofer, he thought stardom lay in roller-skating. OK, this was actually a pretty cool Bow Wow Wow gig in November 1980 at the Starlight Ballroom, Hammersmith, and he is sporting Vivienne Westwood’s spanking new pirate outfit which, he said, had cost £150 from the newly-opened World’s End shop in Chelsea. Minutes later, his voice broke and it was all fame fame fame – deejaying at Planets, Club For Heroes, the Limelight. Whatever next? (Photo © Shapersofthe80s)

SEASON OF THE YOUNG BRYNNERS, 1980

Three Blitz Kids with polished pates: Lee Sheldrick wearing Modern Classics, Myra and Michele Clapton in their own improvisations – captured for a Sunday Times Magazine feature about Soho in November 1980 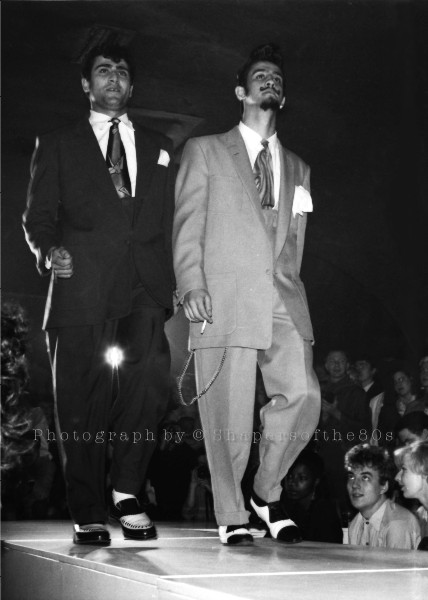 Clubbing style 1981: Chris Sullivan’s zootsuits strutting the Axiom collective’s runway at Steve Strange’s Club for Heroes in Baker Street. Modelled by Solomon Mansoor and Christos Tolera, photographed by Shapersothe80s, and displayed at the V&A’s Club to Catwalk fashion exhibition in 2013

FROM FASHION TO THE DIAMOND LIFE 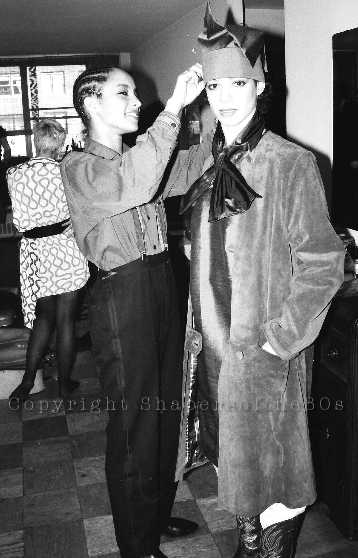 From St Martin’s fashion student and model to international singing star, Sade Adu has collected an OBE and CBE … Seen here in New York 1981, Sade sports braided short hair and hallmark narrow pants, while she fits a model with her outfit on the Demob label. Sade once told Shapers that Princess Diana’s question to her after a Prince’s Trust concert was: “Do you always dress like a man?” Photograph © by Shapersofthe80s 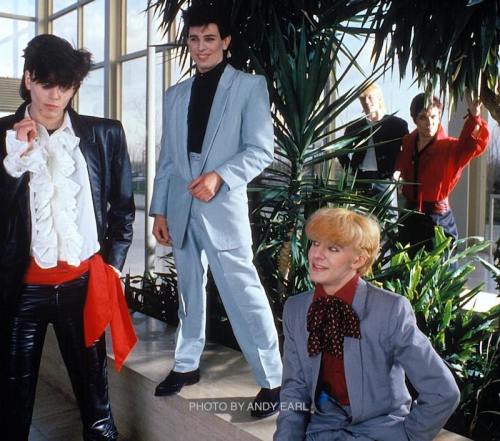 100 miles north-west of the Blitz Club five lads in a pretty-boy band working at Birmingham’s Rum Runner club retuned their vibes to the spirit of the movement newly labelled as the New Romantics. Duran Duran not only brazenly wrote the phrase “new romantic” into the lyrics of their debut single Planet Earth but hired Blitz Kid and i-D co-editor Perry Haines to style their sleeve photographs and first music video giving them the oh-so-vital frilly-shirt profile that said their image was as important as their music. 100 million record sales later, they have no regrets. (Photo © by Andy Earl)

THREE FOR THE PRICE OF ONE 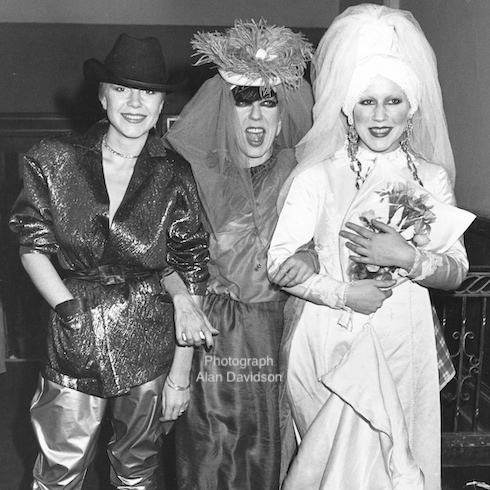 The Parkin trio in 1981: former Nova fashion editor during the Swinging 60s Molly Parkin passed on her own sense of excess to both daughters Sarah and Sophie seen here at the Venue. (Photograph © by Alan Davidson) 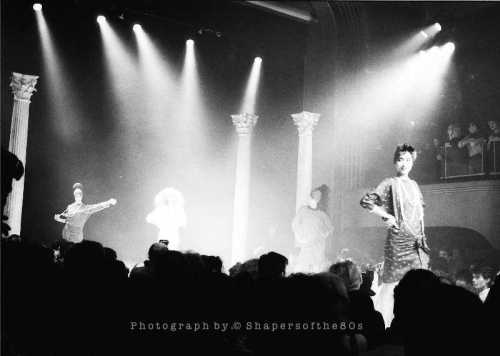 Londres est arrivée au Palace: In April 1982, Steve Strange orchestrated the first serious showcase for a wave of young London designers at the coolest nightspot in Paris, the Mecca of the established fashion world. These were the six British names who had helped create his image – Melissa Caplan, Fiona Dealey, Helen Robinson, Antony Price and the Stephens Linard and Jones. Shapersofthe80s was there 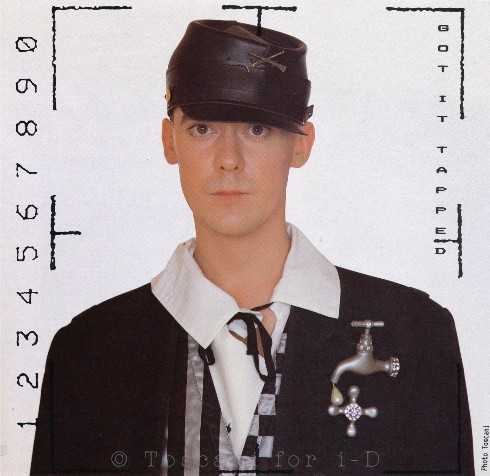 Ex-St Martin’s fashion designer Stephen Linard at the height of his commercial success in 1984, when he worked for three years for Jun Co in Japan. Here pictured by Toscani for i-D magazine’s issue No 15 in “An illustrated guide to detail”. He sports a leather Confederate Army cap $15 bought in transit through Anchorage airport in Alaska. The jacket £250 over giant-collared shirt £120, and trousers £200 are all by Yohji Yamamoto. Waistcoat £180 by Gianni Versace. Artfully placed on his left lapel is a silvered bathroom tap £60 and faucet brooch £40, both from a jewellery collection for Chloe, Paris. He said: “It was worth it for the stir it caused at the Paris collections.”

❚ AMID THE COLOURFUL EXTRAVAGANCE of 1980s fashion, one label in particular stood out thanks to their pioneering approach to making and showing their creations: BodyMap. For the V&A’s Club to Catwalk exhibition in 2013, this video looked back at the DIY origins of the label with its two founders, Stevie Stewart and David Holah, and learned of collaborations with a young Mario Testino, Michael Clark and David LaChapelle, among others.

THE OBSERVER MAG DEFINES THE STREET, 1980 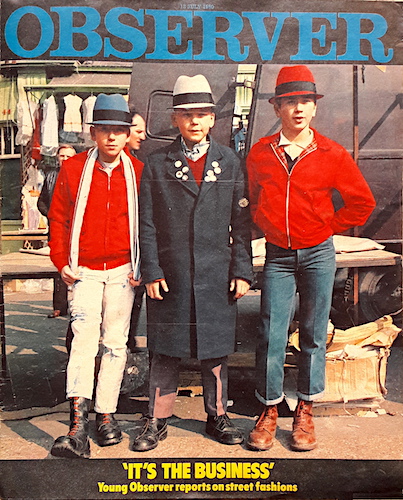 Observer Magazine July 1980: Those porkpie hats are a nod in the direction of cool but those Doc Martens and jeans are well behind the curve being set by the true stylists