1980, Private worlds of the new young

THE CYNICS may have written off London as dead in 1980 but somewhere under the skin a dozen small worlds are struggling to prove our swinging capital is not yet finished. Each private world has its own star system and its own code of conduct. Some steer a scenic route through the maze of being young, broke and having energy to spare

Judi Frankland in one of the clerical cassocks from her degree show summer of 1980, pictured by Derek Ridgers. Style commentator Perry Haines, by Simon Brown

◼ LAST THURSDAY was as typical as any. At about the time 5,000 fans from Disco World were leaving The Crusaders concert at the Royal Albert Hall, 1980’s new London underground was coming to life. On the door of a Covent Garden club called Hell, Chris Sullivan, in monocle and Basque beret, and Judi Frankland, in the home-made clerical cassock that she’d worn in Bowie’s video for his chart topping Ashes to Ashes, were posing for an Italian magazine photographer. Inside, playing box-office and wearing his own modish Stephen Jones hat and all too visible makeup, sat the ubiquitous Steve Strange, 21, Hell being the twice-weekly off-shoot of his much reported Tuesdays at the nearby Blitz club. For him, he said, dressing up is a way of life. “I don’t do it to get attention.” 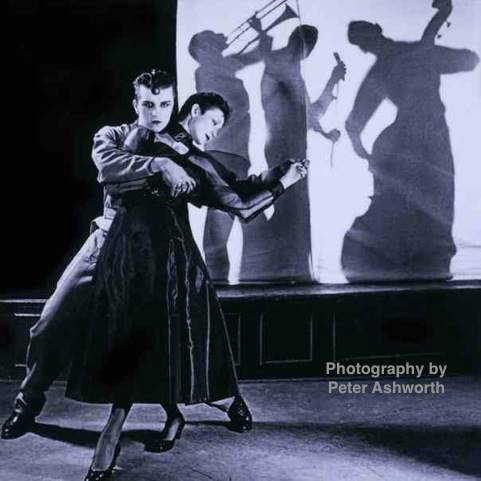 Dress for these Pose Age people is very Hammer Horror, very Rank Starlet. Nobody gets in “if they’re too fat and normal”.

Talk will be artsy, of upcoming projects in music and fashion, for work and relaxation go hand-in-hand in Hell. “Next month we’ve got our own album coming out under our name, Visage,” said deejay Rusty Egan, who described their music as European electronic. It’s designed for clubbing, and Visage is less a band, more an idea, he said, so they don’t play gigs. “Every track will have a different theme: horror movies, cowboys, puppets.” This week at Hell, however, the Now sound is ’76 soul – Juggy Jones’s Inside America to Candi Staton’s Young Hearts Run Free. “People who come here were all punks then. Now they go mad for soul. It’s like punk never happened.”

Club host Chris Sullivan on the door at Hell, where his suits broke with New Romantic foppery: his mantra was (and is) “One look lasts a day”. Photographed © by Richard Law

Accuse them of being a dandyish minority and the Now Crowd point to the growing dress-sense among youth generally, the wing collars selling in Chelsea, and idiosyncratic designs of theirs copied for Knightsbridge shops. Wasn’t designer Melissa Caplan wearing black and white in 1978 before it became the Two Tone movement’s standard? Hadn’t David Bowie pinched their pierrot look since he last looked in wearing trilby and trenchcoat?

◼ HALF A MILE AWAY a visibly different branch of Club World queues in Meard Street for Gaz’s Rockin’ Blues, a Thursdays-only affair, where the music, good tight R’n’B and reggae, is more important than a dress code, but if there is one then Gaz sets it himself, Gaz being Gary Vincent [as he called himself at age 22], ex-Holland Park comprehensive school, ex-antiques salesman, wearing bumfreezer and on his head an all-American Mallory (“It sheds showers”). Some members have dressed as spivs, some as glamour girls, others as themselves. They come from miles away and span as many generations as the music. “People come here for good music,” Gaz said. “When we opened three months ago they didn’t know how to dance to this stuff. But they’ve practising at home. They’re into it now.”

◼ “BEING ABLE TO SAY this man is a rocker is finished,” said Perry Haines, 22, a student journalist and voice of Fashion World. “Through the Seventies young people accumulated a varied vocabulary of clothing and now they’re stringing it together in sentences. Our elders find it hard to handle because there are no ins and outs. One night you can be a rockabilly and the next into a different groove.”

This was Friday lunchtime and Haines was at the West Hampstead home of former Vogue art director, Terry Jones, putting together the second issue of the Jones brainchild, a magazine logically called i-D since its theme is identity. That evening Haines was presiding over i-D magazine’s own club night called Sink or Swim in Meard Street (same venue, another clientele). “We play 100mph dance music,” he said, and you’ve never seen elbows and knees fly faster to sounds like James White and the Blacks. “People are waiting for something to run with. They’re at the starting blocks.” A Polaroid movie camera filmed and played back the scene four minutes later. Were the James Dean generation ever so aware of their own performance?

Gaz Mayall (aka Vincent because he didn’t want to use his dad’s name) and Martin Degville at his London Dispensary, photographed by © Shapersofthe80s

◼ OVER AT THE BLITZ the same night Steve Dagger, 23, wore a smile as broad as a Cheshire cat’s. He clutched a fat, fat Pop World cheque signed Chrysalis Records. His band, Spandau Ballet, had clinched an £85,000 deal that day and he was celebrating with the Welshman Sullivan and budding pop journalist Robert Elms, 21.

Elms said: “Two generations have failed to get the better of the record business so this generation is learning to exploit the set-up that exists. We’re all living on our wits and that’s symptomatic of 1980. I walked into the NME and The Face and said, ‘Here read this’. Steve has held out for the deal he wanted. We’re making our own music and clothes. We’re attempting to make the most of ourselves.” 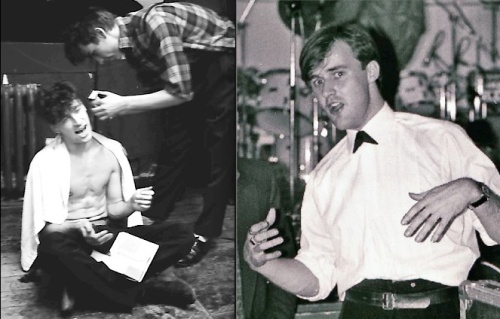 1980: Mark and James Lebon at ArkEnt; Steve Dagger on the road with his band, photographed by © Shapersofthe80s

◼ BLUE SMOKE filled the Pool Hall at Kensington Market on Saturday afternoon. Bands had played, fashions been shown and the Lebon brothers had staged an Art World manifestation in which James shaved the head of Mark, a 21-year-old photographer, as he read a novel. Now a couple called Pulp were ranting and banging drums in the smoke. “Have you heard their record, Low Flying Aircraft?” someone murmured. “It’s sold 1,500 copies,” said the performer Paul Burwell. His partner Anne Bean looked exhausted.

This was the fourth DIY event here, mounted as a platform for untried talent by an ad hoc gang called ArkEnt. Sadly, the proceedings didn’t rank up there with Hugo Ball’s Cabaret Voltaire and Pulp were no Zurich Dadaists, but in fairness high spirits were everywhere evident and leisure spent creatively must surely be one-up on the betting shop.

◼ DOWNSTAIRS in the market, Degville’s Dispensary sells clothes that rely heavily on pantomime, lots of lamé and tassles. A junior branch of Cabaret World. Absent from the shop was its owner, Martin Degville, 22, normally a shock to the eyes himself. Another one who’s never out of make-up. Hardly surprising, then, that he gets hassle from squaddies on the train down to Euston: “They throw half-eaten pork pies at me.” On Saturday he was at home in Walsall running up some samples for a London retailer who’d just cleaned out one rail – what he calls his “puppet tops”, in three pieces joined with straps.

“I taught myself to make clothes,” he said. “I was doing these enormous shoulders years ago when I used to stuff my T-shirts with rolled-up football socks. They’re only fad clothes. People don’t want an immaculate finish. They’re just trying to get away from C&A.”

That night as London’s Hell crowd met and the overspill filled Studio 21 in Oxford Street, Degville was in Birmingham drinking at Hurst Street’s Hosteria wine bar, with chopsticks in his hair, like you do. Since the management changed, a growing crowd is gathering there every Saturday as the place to be seen. But, he says, the really cool night to go out is Tuesday. “That’s when there’s a Bowie/Roxy night at a club called the Rum Runner. It’s where the freaks go, really dressed up.” The Pose Age is branching out. 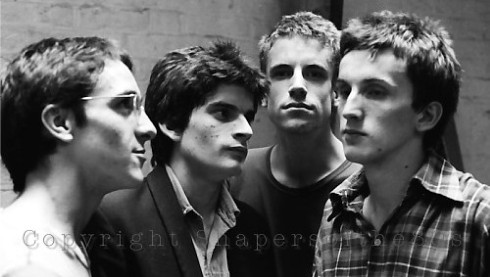 ◼ FURIOUS PIG are four lads from Devon, aged 18-22, who normally play rock music. On Sunday evening they left their instruments at home, recast themselves as a “voice band” and reduced the Comic Strip audience to helpless laughter. They rendered four tunes using only screeches howls, gobbledigook and red wine. “I Don’t Like Your Face” was an instant hit. “They should make a record,” someone said. At the offices of Rough Trade on Monday, Furious Pig were discussing that very possibility. “To prove you can get up and do what you want,” one of them said.

PS TO THOSE PRIVATE WORLDS

First published one week later in the Evening Standard, Oct 23, 1980.

◼ IN A KILBURN BEDSIT, Marek Kohn, 22, and his girlfriend are planning the editing of some Super8 film they’ve shot of young Parisians. “It will only last three minutes,” he said. “It’s as disposable as that.”

The film is the next project under the banner of Restless, the name he gave to a one-off magazine he wrote, xeroxed and published for £100. Kohn, a Sussex graduate and assistant at the Science Museum, said: “Young people are full of ideas that need to be expressed but big business has subsumed so much into rock culture. I’d like to promote the idea of one-off projects.”

On Friday John Maybury, 22, will be working at Olympia, commissioned by established designer Antony Price to interpret freely his fashion show with film and video. Maybury, a fine-art first from St Martin’s, already has a reputation. “I’ve seen how restricting the film industry can be,” he said. “London is geared to the previous generation – people from the Sixties – and our generation realises we’re being denied opportunities. The notion of change has become the whole point to us.”

Rosetta Brooks, writer and teacher at St Martin’s School of Art, has just brought out a sharp magazine called ZG, devoted to observing the cross-fertilisation that’s growing between the separate worlds of fashion, film and music. She said: “More than any previous generation, this one is aware of playing their part in a world labelled youth culture and they adopt an ironic stance to it. The young people who grew up at clubs like the Blitz, filming themselves at play, cross the boundaries of the labelled worlds of fashion and music. They take the idea of youth culture to the point of parody. So one day they’ll change their appearance, the next they’ll desert a favoured club. They’re taking the notion of fashion to its extreme – making something happen then walking away from it.”

Last week the original Now Crowd quit the Blitz club they had put on the Covent Garden map in February 1979.

Unsettled by the worlds of portable events and disposable entertainment? Psychologist John Nicholson — author of the new paperback Seven Ages — has comfort: “Where mods and rockers were deeply committed to their ways of life, these shifting new groups demand less loyalty, and that should make parents less worried.

“For young adults the Seventies were a write-off decade: they knew only a second-hand youth culture of borrowed idols. Maybe it takes a generation to see this. Certainly their degree of cynicism today is new. I’m surprised it’s taken so long for them to get angry about us running everything. Our generation came to power while young and we’ve never relinquished it. The major change is the area the young are exploring. Where we’d have picked up an acoustic guitar, they are turning to cameras and electronics.”

Time for the rock’n’roll generation to make way for the era of video’n’chips? 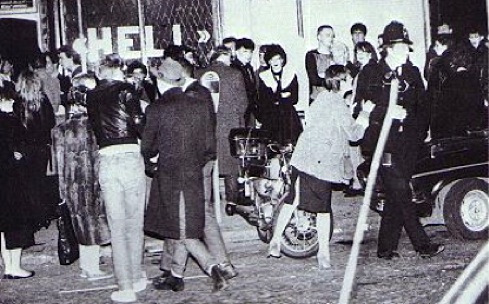 Saturday Oct 18, 1980: a police raid closes Hell for good, meaning Strange and Sullivan had to move on