As the cultists get their own niche magazine,
they are asked to read its fortune 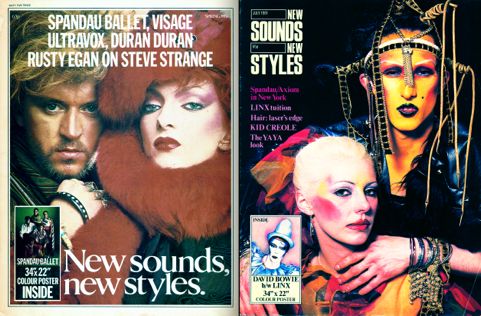 Mighty leap: After spring 1981’s pilot issue of NSNS, left, set out the origins of the New Romantic movement, the first monthly issue was launched in July with clubland reports from New York to Liverpool, fashion from Birmingham, and music from funk to Ze. Cover photograph of London Romantics Steve Strange and Perri Lister by Robyn Beeche; and right, Birmingham’s style leaders Martin Degville and Jane Farrimond by Paul Edmond

◼ IN MARCH 1981 the then-savvy magazine giant Emap published a 64-page pilot issue titled New Sounds New Styles, hard on the heels of The Face and i-D, two independently financed pathfinders in this yet unfamiliar post-teen market for magazines that discuss more than music alone. NSNS was designed to test the potential of the New Romantics fashion and clubbing scene in the very spring when it was taking off with explosive force. Britain’s style-conscious young suddenly found new clubnights opening by the week while chart music changed direction – away from middle-of-the-road rock and chart pop, towards newer dancefloor variations on funk and electro-pop.

Dozens of new image bands were adopting outrageous stances in their bid for fame so that after Duran Duran, champion of the Birmingham Romantics, had signed to EMI, they found their first single Planet Earth battling its way up the February charts alongside rival newbies Spandau Ballet, Visage, Ultravox, Kim Wilde, Toyah, The Teardrop Explodes, Beggar & Co, The Look, not to mention five, yes, five singles by the old-school panto-punk Adam Ant, who remained defiantly outside the clubland fraternity (and has gone on over the years denying any affiliation with the New Romantics).

The irony was that the clubbing pioneers who had generated a year’s worth of media clamour were now shaking off the dubious label of New Romantics even as Duran Duran wrote the phrase into the lyric of their debut single which finally reached No 12 in the UK chart that March.

So in order to persuade Emap to give the go-ahead to an official first issue of NSNS in July, its editor Kasper de Graaf asked movers and shakers one crucial question in that spring pilot issue, as forecasts of race riots threatened the peace across a politically turbulent Britain: Did this seemingly frivolous, if highly sociable, new youth movement have a future?

These were their forecasts… 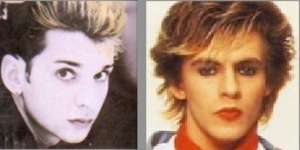 “The whole thing is a big bubble that’s going to burst. It’s only the tip of the iceberg. There’s a lot more to come from this scene.” – Nick Rhodes, keyboardist co-founder of Duran Duran

☐ “As long as bands like ourselves don’t get tied in with the Futurist thing we’ll be all right. The clubs are going to get a lot bigger; now Spandau Ballet have broken the music for a broader public, tastes will slowly change – and that’s been needed for a long time.” – Dave Gahan, vocalist with Depeche Mode

“As a form of entertainment, clubs have taken over from gigs; groups are now making music for that sort of environment. What’s going on in London is a piece of pop culture rather than rock culture. When people don’t want to be associated with it in a cult sense, they’re saying that it is really a broad set of attitudes.” – Steve Dagger, Spandau Ballet manager

☐ “The press have tended to make it all sound quite lightweight and facile; they’ve underestimated the work that goes into starting a club or opening a shop. They’ve ignored the extent to which people are making their own entertainment and are genuinely making new things happen.” – Simon Withers, first designer of clothes and lighting for Spandau Ballet

“Steve (Strange)’s music is about making people dance: first they’re all thinking, Hey, we’ve got to dance like machines. Then it’s more like disco dancing, because the songs have gone funky. We want to keep them thinking, What is he going to do next?” – Rusty Egan, mould-breaking deejay and Strange’s club-partner from the Blitz and beyond

☐ “A few individuals will come out of it all who will be the best at what they do, the four or five best from their generation.” – Bob Elms, writer

“As a graphic designer and photographer, I see it as not just a music fad but as a whole cultural movement.” – Graham Smith, whose Spandau Ballet sleeves counted towards his first-class art-school degree 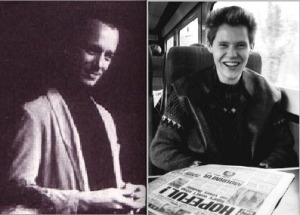 ☐ “It’s got out of hand. You’re dealing with a group of people who will exist in four or five years’ time and would have done, whether the media got hold of them or not. I don’t care about fads in fashion. I’ve chosen my career as a designer and in ten years’ time we’ll look back and it’ll all seem very unimportant.” – Melissa Caplan, clothes designer for Toyah and Spandau Ballet

“People are beginning to appreciate that everyone has talent within them. That’s the best thing this movement is going to do, make people realise that talent.” – Paul Berrow, Duran Duran co-manager and co-owner of Birmingham’s Rum Runner nightclub

☐ “In 1980, sadly, pose became paramount. People were afraid to laugh or cry in case their make-up cracked. Now in 1981 if you’ve got to get drunk, get drunk on funk.” – Perry Haines of trendspotting i-D magazine and Duran video stylist

“In some ways it *is* going to be all over next week; the people who want to keep it all as an exclusive Blitz-type thing should realise that’s finished and all for the better. The spirit is the most important thing; people say about punk that the spirit died very early and the corpse staggered on, zombie like. Well, that spirit – the idea that everyone can think and act creatively – has been revived by these kids and there’s no reason why it shouldn’t set the standard for the next ten years.” – Richard Burgess, Landscape musician and Spandau Ballet producer

◼ AS HISTORY WOULD HAVE IT, NSNS itself ran for 13 issues before closing in July 1982, not long after the onetime Cult With No Name had been swept into the mainstream with the opening of such mega-clubs as Camden Palace in London, the Hacienda in Manchester, Rock City in Nottingham, Ultratheque in Glasgow and the Academy, Bournemouth. By that stage the new pop was readying itself to conquer the world. 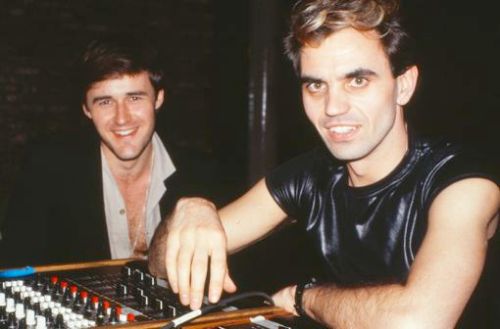 The manager, the producer: Steve Dagger and Richard Burgess during Spandau Ballet’s foray to New York in May 1981. Photographed © by Shapersofthe80s