A bearded George Michael before Wham! came along: Captured on 20 February 1981 with his eye on the Nationwide TV camera, among many familiar faces at Soho’s Friday night Beat Route – where the Caribbean beach decor was to inspire his song Club Tropicana. (Photo BBC)

Paul McKee, admin for Soul Boys Soul Girls at Facebook – “RIP George Michael – A regular at our clubs Le Beat Route, Wag, Bogarts and many others. Easy to forget now the impact Wham Rap! Had. It was not out of place at the time in 1983 when the likes of Funkapolitan, Spandau Ballet, Culture Club, who all came from our clubs, began producing great club records, as the Soul Boys and Soul Girls sound and styles began to change. When Wham! performed Young Guns on TOTP with that dance routine, we all noted some of those little moves he used, we’d witness at a club at any given weekend. Without doubt one of the greatest soul voices and songwriters this country has ever produced. He liked to club like the rest of us, George was one of us.”

Deuce Barter – “I recall Wham! signing their first record deal in early 1982 with Innervision Records. The boys both received an advance payment of £3k each. George spent his on some 4-track recording equipment whilst Andrew immediately bought a green Ford Capri 3000S!‬”

Amanda Sullivan – “Fond memories of him at The Mud, Beat Route, Dirt Box and Wag. A great talent and a terrible and tragic loss to those who loved him.”
‬
Ray Kane – “Not forgetting of course that one of the Wham! backing singers Diane (Dee C Lee) was also a 100% soul girl.”

Gavin Juniper – “When we’d all go to The Limelight and to Pop Stars, deejays and clubbers would intermingle and have such a great time. Seems like yesterday to me and then today we have yet another friend gone. Lovely George.”

Ross Fitzsimons – “George was deeply impressive, as at home and accepted in the Royal Opera House as he was in a full-on club setting. His artistic range was extraordinary, encompassing beauty, loss, pain and sophistication. . . Father Figure, the delicate and intricate cover of Edith & The Kingpin, the dirty funk of Outside, the full-on slamming house mixes of Flawless and White Light, the symphonic triumph of Wild is the Wind. Baffling and untimely loss.‬”

Paul Sturridge with George at the Dirt Box 1982

Stephen Eaves – “I always remember George Michael dancing by himself to the Isley Brothers’ Harvest for the World at the Lyceum ballroom‬.”

Susan Walker – “I remember dancing next to him at Raw and thinking how bloody exciting London nightlife was when that could happen.”

Gavin Martin – “One time we had returned from an Amdam weekend and had to wait back just past Heathrow passport desk. To amuse ourselves we played a silly game where – at the merest distant hint of a celeb – an approaching person would occasion a wink, a ribcage nudge and a careless whisper confidently confiding that it was “Ronnie Corbett”, “Prunella Scales” or whoever.  And suddenly undercutting our little game there was the unmistakable George and a guy who he was evidently travelling with in a carer capacity.  I’d had a brother like that many years before and he hadn’t lived so long.  I don’t know who the guy with George was and I don’t know where he is now but seeing The Yogmeister easy and relaxed in public with his buddy chimes perfectly with the stories shared today of a guy who volunteered for the homeless and performed random acts of generosity.  And there was so much beauty, loss, adult pain and sophistication in his music. And euphoria too of course.”

Cleveland Watkiss – “It wasn’t until I heard Jesus to a Child and the other songs from his great album Older that I became a fan, and started to take serious note of GM as a mega vocalist and songwriter. Home to glory.”

Gary Crowley, deejay – “Truly one of the greats. He could do it all. . . write, sing, produce and had that rare ability to make a stadium feel like an intimate club. He is going to be so, so missed. My favourite memories will always include my stint as Wham!’s warm-up man on their debut Club Fantastic UK tour, 1983. The nearest I’ll ever get to being in the Beatles’ A Hard Day’s Night. Innocent and happy times with warm, generous and funny people. RIP George and thank you for the music.”

Jack Mael – “I’ve still got that programme [above], brought back from the Swansea Top Rank gig by my brother Rob Brydon who is very upset by this awful news, as I know you are, Gary.”‬

Mark Moore, clubland deejay – “Bless you George Michael. A real talent who managed to remain a real and warm person in spite of the fame. You are missed by so many of us.”

Sally-Anne Cooper – “Heartbroken. One of our Camden Palace family, so many fond memories.”

Kev Barnes – “One of my first post-Jam gigs I saw was Wham! at Hammersmith. A good fun band and the less said about shuttlecocks the better!‬” 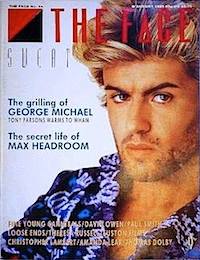 Graham Edwards – “His solo work was stunning. His tribute to Freddie and Don’t Let The Sun will always be there for everyone to witness. He was never my favourite artist, but I’d like to think that I know a genius when I see one.”

Russ Kane – “Wham! great pop songs delivered in a brilliant fun no-holds barred way. Then the growing maturity of a global superstar fighting his demons. A charming man who was always friendly and down to earth. Sometimes the demons win.‬”

Ken Naylor – “I was never a huge fan or follower but there’s no arguing with his talent and way around a decent tune. And Praying For Time is simply brilliant.‬”

Steve Swindells, musician, club host – “George. What a lovely man he was. Great company. So intelligent, witty and generous of spirit. And above all, so very, very talented. He’s in a different corner now. No more careless whispers. Sleep well, you beautiful soul.”

Rob Milton, clubland deejay – “RIP George. I wasn’t a huge Wham! fan but I loved his Older album. An immense talent. So sad.”

Jack Adams‪‪ – “A highlight of my career was cutting I Want Your Sex for him. He was a perfectionist and a great guy.”‬

John Lalor – “My wife was a good friend of George’s sister and we had dinner at his house in Goring and he invited us to his show and backstage after. My wife knew George from the conception of Wham! and said he was a lovely kind generous man but a troubled soul. RIP.”

Seven Webster – “As a musician, signing your first record deal should be a huge moment, and I do remember heading out for a celebratory drink with Gene Loves Jezebel guitarist Albie Deluca after the band had signed a deal in the early 80s. It was a Tuesday night so we joined our mutual friend deejay Colin Faver who was resident at Cha-Cha upstairs at Heaven nightclub. What I remember most from that evening was having a joint celebratory toast with a then unknown George Michael who had also just signed his first record deal with Innervision Records.  Even as an unknown artist at the time, what I remember about George was that something shone bright, and you knew that great things lay ahead.  100 million GM record sales later, how saddened I was by the news of his passing. He was a true one-off, another irreplaceable star.”

Peter Godwin – “RIP George Michael. Too too sad. I hadn’t seen George in recent years, but we go way back to happy nights out on the town with all the young guns. 53. Just tragic.”

Tatiana Packer – “Gutted. He used to frequent South Beach in the late 80s when I first moved from NY. So, so incredibly talented and what a soulful voice.”‬

Wham! in leathers from Lloyd Johnson’s in Kensington Market

Vicki Sheppard‎, admin for Kensington Market London UK group at Facebook – “RIP George. A much loved and respected Ken Mkt customer. I know Johnson’s and Western Styling owe him for the great press.”

Lloyd Johnson, Ken Mkt retailer – “I remember Trudi telling me about his boots getting stolen and he bought a load of them to cover that. I think he had half a dozen of the jackets as well. He was always generous signing our jackets when we donated them at charity auctions at Grosvenor House Hotel.”‬
‪
Princess Julia, clubland deejay – “Actually can’t bear the news of George Michael’s sad departure.”

‪Erik Alexander Dobler – “My heart always belongs to George. I have never heard such a great album like Older. Songs about dying, love, sex, grief, HIV. A real masterpiece.‬”

Robert Leguizamon – “First time in my life I ever heard a man sing about grieving another man. Older is a real masterpiece.” 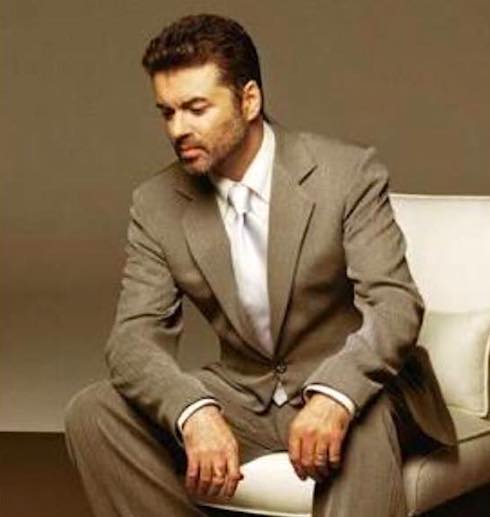 Art Conn, Mexico – “I had the honor and pleasure of working with George Michael a few times. I got to tell him how important he was to me as a gay artist and as a human. I’m so sad at the loss of light and talent. His death is gonna hurt for a very long time. The photo here [above] I helped style for British GQ. And a huge thanks to Kim Bowen for putting me in the same room as greatness. RIP my dear George. I’m never gonna dance again.”

AND HIS FRIENDS IN SHOW BUSINESS 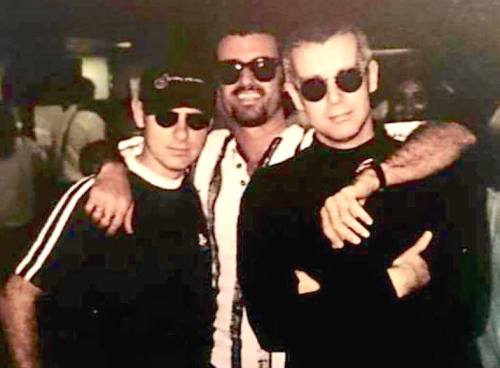 George with the Pet Shop Boys

Sara Dallin, Bananarama – “Heartbroken at the loss of one of my oldest friends. I will never forget the fun times we had together. Rest in Peace George, I’ll miss you.”

Corinne Drewery, Swing Out Sister – “So long George, a true gent and a good sport. Mr Michael was one of the first to congratulate us with a big kiss in a club in LA when our debut album went to number one. My mum just reminded me she thought I was going out with him as she had read in the paper we had been seen snogging in a club in LA. Careless Whispers!”

Rhoda Dakar – “Outside was an absolutely brilliant response to the furore that went before. Intelligent, mischievous and gifted, another great artist whose influence has been and will still be felt by millions. Very sorry you have left us so soon.”

Spandau Ballet / Steve Dagger – “We are incredibly sad at the passing of our very dear friend George Michael. A brilliant artist, great songwriter and a kind, generous man.”

Tony Hadley, singer – “I am devastated at the news of the death of George Michael. Sending all my love and wishes to his family.”

Andrew Delaney, video maker – “Quite a few of my friends worked on this video for As which we did for George and Mary J Blige. Mary was great but I really got on with George. The fella was a chatterbox. And he was really kind to my mum when she and her friends came up to the shoot in Stratford (the glamour!) from Southend. He was a lovely, lovely man. He will be missed.”

Coati Mundi, musician – “Was shocked and sad when I heard the terrible news. Came across George when he was with Wham! He was so down to earth and when he shared that he was a fan of Kid Creole and the Coconuts and specifically cited me, I truly felt honored and inspired. George was a gentle man and a true artist who never stop growing. When it came to his craft the cat was on top of his game; the world indeed lost a magnificent gem.”

David Mitchell with Kim Bowen – “George was a sweet and incredibly talented man. Proud to have been involved in this video for Flawless.”