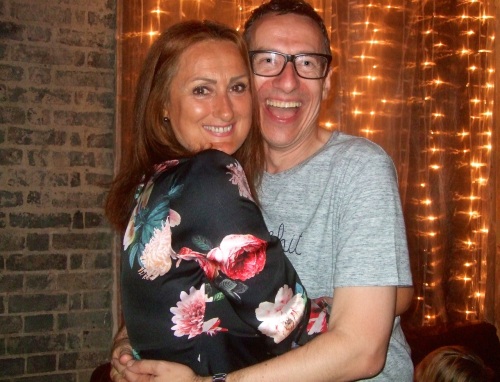 ◼ FRIEND OF THE STARS (1980s division) Paul “Scoop” Simper threw a launch party for his book Pop Stars in My Pantry (PSIMP) at London’s Union Club on Thursday. He was delighted to be in Greek Street, of all the streets in Soho, because that’s where his story began, at the legendary Le Beat Route club directly opposite…

➢ Click through to full report and pictures from the PSIMP party

Simper with his special Bananarama Award for inspiring their gold album Tea at Mrs Simper’s, presented at the book launch by their manager Peter Loraine. Who can forget Robert De Niro’s Baking, and King of the Crumble? (Photo by Shapersofthe80s) 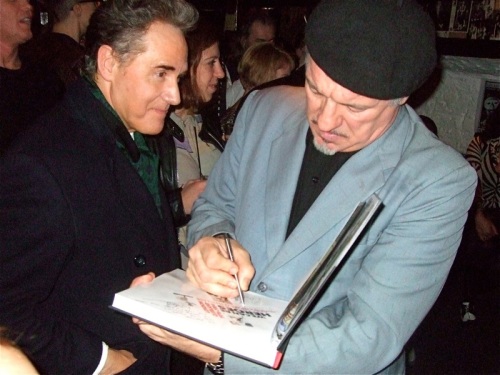 Cultural observer Peter York: eager for the Sullivan autograph on the new edition

❚ THE 80s BLITZ KIDS turned out in force last night. As Kitten Kouturist Franceska Luther King remarks today: “an elegant crowd, older, but still the same spirit.” Those clubbing compulsives who defined the sounds and styles of Soho 30 years ago, swarmed into the tiny steaming Artex-lined cellars of the St Moritz restaurant, the fit all the tighter thanks to a fair few middle-aged paunches. For three months in 1980 this was the site of their milestone one-nighter which signalled the first faction to break away from the futurists at Steve Strange and Rusty Egan’s pioneering electro-diskow, The Blitz. In host Chris Sullivan’s words, this was “the more alert end of the Blitz crowd” – in other words, the hardcore fashionistas.

Initially St Moritz’s music evoked interwar Berlin cabaret but the effect of Charles Fox, the theatrical costumiers, staging its closing-down sale in Covent Garden injected a huge Hollywood movie wardrobe. Sullivan notes:  “You could be a gangster, a geisha, or Geronimo.” The New Romantics had been born – just like that!

“No single shop sale ever had such an influence on street fashion before or since,” Sullivan writes in the fabulous photo-book, We Can Be Heroes. This ribald account of the dawn of UK clubbing in the 80s, led by the eye-popping photographs of Graham Smith, was the reason for last night’s beano. Soul-music diehards Smith and Sullivan graduated from The Blitz to become two of the St Moritz deejays (along with Robert Elms and Steve Mahoney) and half a lifetime on they were hosting yet another launch party. The book’s revised and amended second edition of 2,500 copies is released this week through regular retail outlets. Copies of last year’s limited edition are still available from the fund-it-yourself publisher Unbound.

St Moritz 1980: Chris Sullivan and Michele Clapton – from Smith’s book We Can Be Heroes

Back in the day, the St Moritz posse distinguished themselves from The Blitz by playing retro lounge-lizard tunes from Lotte Lenya or Nat King Cole. In today’s arts pages of The Times Sullivan recaps how, in their efforts to avoid the present, he and his cohort helped create the future: “We decided to oppose Blitz futurism and turn the clock back with music from Marlene Dietrich, Monroe, Sinatra and soundtracks from A Clockwork Orange, Last Tango in Paris and Cabaret. It was an alarming success.”

Rob Milton: Shooting the Pump in the deejay booth

♫ Click to hear Shoot the Pump in a new window

Fashions in music moved apace. Within a year successive London club-nights at Hell, Le Kilt and Le Beat Route were stirring into the club mix not only familiar 70s soul but the edgy new urban sounds of North America.

Choosing the soundtrack last night at St Moritz were the were the astute ears of David Hawkes, Christos Tolera and Sullivan himself, plus Dirt Box co-founder Rob Milton, who raked the dancefloor early in the evening with the crazed beats of Shoot the Pump. This intoxicating debut single from 1981 was a state-of-the-art fusion of emergent street sounds – rap, hip-hop and funk with a hint of mutant disco – from the “playin’ brown rapper” and graffiti artist J Walter Negro & the Loose Jointz (on Zoo York Records via Island). J Walter is urging his crew of Zoo Yorkers to spray docile citizens with the water from a fire hydrant: “You make like a monkey with monkey wrench, cos you feel a little funky, got a thirst to quench.” In 1980–81, something similar was pumping the adrenalin in London.

St Moritz 1980: Chris Sullivan and Michele Clapton – from Smith’s book We Can Be Heroes 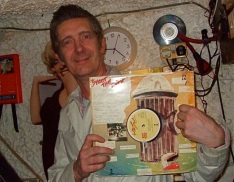 Rob Milton: Shooting the Pump in the deejay booth

Cultural observer Peter York: eager for the Sullivan autograph on the new edition 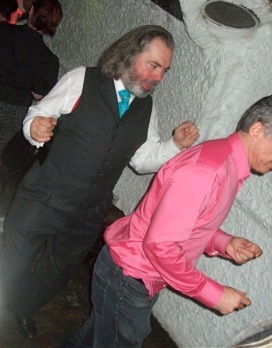 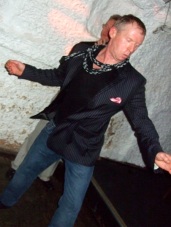 ➤ Smith & Sullivan sign off We Can Be Heroes with a sigh

Graham Smith: signing advance copies of We Can Be Heroes between coffee and cake today at Soho’s Society Club. Photographed by Shapersofthe80s

❚ THE BOOK OF THE DECADE has arrived and early buyers of the 2,000-copy first edition had it in their hands today. The photo-story of 80s clubland, We Can Be Heroes, felt reassuringly hefty to the touch and we finally discovered the page size to be generous at 235 x 280mm. The five-colour printing gives intensity especially to the black-and-white photography on the high-gloss paper and author Graham Smith’s verdict on the quality was simple: “Stunning.” Collaborator and 80s club-host Chris Sullivan breathed a sigh: “We got there in the end.”

The 320 pages of story-telling and voxpops from perhaps 100 contributors will raise plenty of smiles when the postman delivers the book during the next week. Even if you’ve read Shapersofthe80s from top to bottom, you’ll find as many more quotes and insights from the original Blitz Kids themselves. Deejay Jeffrey Hinton reminds us in the book: “People think this was a premeditated scene but it was not. It was childlike, thrown together. We didn’t do it for the money, we were innocent. It’s all so marketed today.”

Ringleaders who shaped the style of the 80s celebrated in We Can Be Heroes: Chris Sullivan, Fiona Dealey, Lee Sheldrick, Stephen Linard and Kim Bowen — the rebels within St Martin’s School of Art, all photographed by Graham Smith

Bournemouth was the destination on bank holidays: good-natured hijinks brought London clubbers to the south-coast resort, and Smith has included many of their snaps in We Can Be Heroes

While the main images reveal just how small in number was the coterie who initiated the sounds and styles of the 80s, Smith has supplemented his own portfolio of pictures with many snaps from clubland wags themselves whose ambitions were liberated by the spirit of collaboration inspired in 1980. Nevertheless, designer Fiona Dealey makes a valid point in the book: “When anyone has written about the Blitz it has been by the same few blokes giving the same old soundbites with never a mention of what the women were up to. The Blitz was our youth club and I feel they hijacked it.”

Today John Mitchinson, the book’s publisher, said he was reasonably confident that a commercial edition of Heroes might follow in the autumn of 2012. In the meantime a limited number of copies of the first edition are still available only from Unbound Publishing.

➢ 1976–1984, Creative clubbing ended with the 80s — we profile three of the bright sparks behind We Can Be Heroes and how they shaped the decade

Chris Sullivan signing today: “Now people can see the book itself we might shift a few more copies.” Photographed by Shapersofthe80s

2011 ➤ Party of the year recreates the Swinging 80s at the legendary Beat Route (down, down past the Talk of the Town)

Le Beat Route recreated for one night only: One of our heroes, MC Sullivan, sharing the best sounds in London last night

❚ WITHOUT DOUBT party of the year at the former Beat Route, Soho, last night as Graham Smith and Chris Sullivan launched their photobook We Can Be Heroes, which is winging its way from printers to the lucky buyers of the first edition.

Full report and yet more exclusive pix are coming on Shapersofthe80s.com once I can wade through the many brilliant soundbites offered by everybody out last night to celebrate the Swinging 80s…

➢ Although the first edition of We Can Be Heroes has sold out, a special clothbound edition is now on sale for £35, plus a Deluxe edition for £350, at the Unbound Publishing website 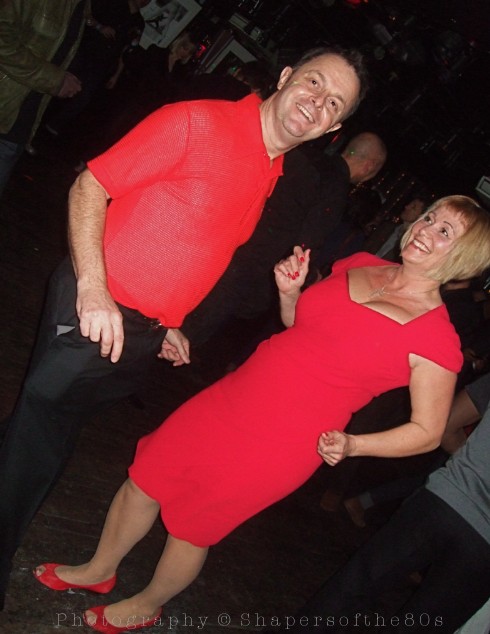 TNBR! Last night’s other chief hero hosting the party of the photobook of the 80s — snapper Graham Smith and his lovely wife Lorraine (Northern Soul veterans, both)

+++
❚ FRIDAY NIGHT WAS AN EXCUSE for the wags to tell their tall tales of clubbing in the 80s. This was the first reunion in recent memory of the bright sparks the media once called Blitz Kids and New Romantics. We’re talking about the straighter faction tonight — the make-up brigade had their day at Boy George’s 50th birthday party in June. All of them, whatever their persuasion, were diehard nightowls, the spiritual offspring of the mighty innovator who shaped the 1970s pop scene almost singlehandedly, David Bowie. He taught them to adopt stances: individualism, transgression. He bequeathed them principles for living amusing lives: disposable identities, looks not uniforms. In turn, they then shaped the sounds and styles of the Swinging 80s set in motion by 1976 and the birth of punk, along with a passion for black dance music, on through the decadent glamour of the Blitz Club years, to the watershed of Band Aid in 1984.

Our two videos capture the essence of Smith’s collaborators, Robert Elms and Chris Sullivan, powering through their often unprintable anecdotes, edited on video down to bite-sized chunks and garnished with Graham’s images. The highspot was meant to be Sullivan as guest speaker, but when he was reportedly “still on his way”, in stepped writer and broadcaster Elms to recall the early one-night clubs he also helped to run. He sounded genuinely shocked by the precociousness of his peers — “We were kids!” — who persuaded West End nightclubs to hand over door control to them as teenagers. Eventually, Sullivan  arrived in the guise of Vladimir Ilyich Lenin, and of course excelled at spinning his “ribald tale of excess” about the mayhem he helped cause in clubland, en route to running Soho’s Wag club for 19 years.

+++
The photos form a dossier creative endeavour, as we’ll soon see in We Can Be Heroes, a 320-page coffee-table book containing 500 mostly unseen images and 100 voxpop interviews by Graham Smith. Warts-and-all main text is penned by the mellifluous Welshman Sullivan, with other contributions from Robert Elms, Boy George, Steve Strange and Gary Kemp.

Smith & Sullivan’s invitation to a party

➢ Visit the publisher Unbound.co.uk to place your order for We Can Be Heroes and secure your name in the limited first edition. This month the authors aim to hit an advance sales target by this new “crowd-funding” technique in order to guarantee publication. 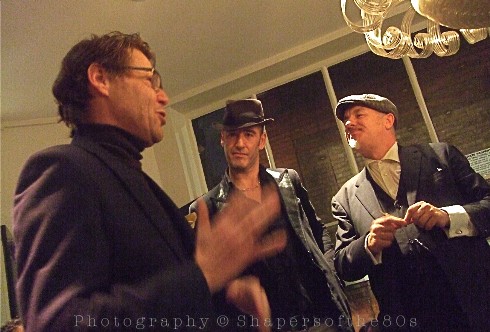