➤ Meet Smith & Sullivan, the wags behind the story of the heroic 80s 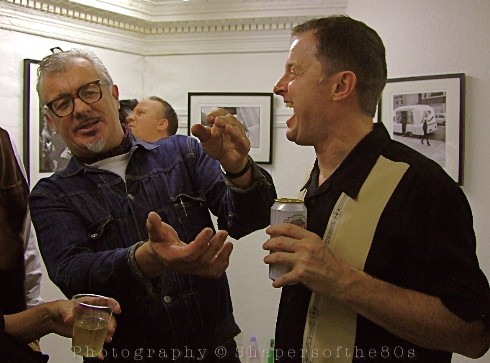 ➢ Although the first edition of We Can be Heroes has sold out, a special cloth-bound edition is now on sale for £35, plus a Deluxe edition for £350, at the Unbound Publishing website

❚ HERE’S AN IRRESISTIBLE PARTY INVITATION. As their fund-raising barometer hits 60% of target, the authors of We Can Be Heroes, a ribald account of Britain in the 80s, announce another soirée  to raise public awareness. Their nightlife peers changed the face of the UK club scene which created dozens of new bands, artists and designers. Born with the mutant party-animal gene, Graham Smith & Chris Sullivan are taking over Robert Pereno’s new Society Club in Soho for two reasons: to show off Graham’s stylish clubland photos, which will be selling there until Christmas; but chiefly to win over buyers who are dithering over investing £30 in their huge coffee-table book that is garnished with tall stories from Sullivan as well as 100 other club-world collaborators.

Come along next Friday to meet them over a drink and to hear the garrulous Welshman Sullivan “in conversation with eminent journalist Michael Holden” — in other words, talking hind legs off donkeys. Orders for the book can be placed only online at Unbound Publishing (where Graham has an explanatory video) so they won’t be prising your wallet open on the spot. Inevitably, a further high point of the evening will be a free-entry after-party where Sullivan will be deejaying classic club tunes from 1976-84 half a mile away at The Aviary Bar.

As of today there are only 16 days left to buy your prestige  limited first-edition of We Can Be Heroes (there won’t be a second edition unless they reach 100% on the first) and you get your name printed in it. You’ll be within the same hard covers as starry contributors such as Robert Elms, Boy George, Gary Kemp and Steve Strange. The clock is ticking because of the new “crowd-sourcing” technique to raise funds. This is being pioneered in books by Unbound, a new offshoot of Faber, whose authors include Python Terry Jones, cultural taste-maker Jonathan Meades, and creator of TV’s This Life series, Amy Jenkins.

One of the reasons fund-raising has been a slow burn for S&S is that, uniquely on the Unbound list, We Can Be Heroes is the only photo-book, requiring quality paper and classy printing. Sullivan says: “Ours needed six times as many pledges as the other text-only titles.”

Smith says: “Dig out your espadrilles and book yourself a baby sitter now!”

Smith & Sullivan’s invitation to a party: click to enlarge

1980: Clare Thom, Philip Sallon and George O’Dowd on a coach trip to Margate. Photograph by Graham Smith/grsmith@mac.com.jpg from his book We Can Be Heroes

WE CAN BE HEROES
must be funded by November 17 [update]

❚ NOBODY IS BETTER QUALIFIED to chronicle the whirlwind six years between punk and the death of the New Romantics than Graham Smith through his eye-witness photography, and the writer Chris Sullivan, one of the core movers-and-shapers of his generation. UK music and style evolved out of all recognition in a mighty resurgence of youth subcultures that directly triggered a rejuvenation of mainstream media for the rest of the decade. Shapersofthe80s was on hand as an observer. But these two wags were in the thick of the action — major players in a spontaneous youthful collaboration to regenerate the UK’s ailing music and style scenes as 1980 dawned. With contributions by a galaxy of stars, who include Gary Kemp and Boy George, this will become the definitive story of one of the great explosions of creativity in British youth culture.

The authors aim to get their large-format 320-page coffee-table photobook We Can Be Heroes to you in time for Christmas. Their “crowd-funding” venture requires them to raise the cash first by asking YOU to buy your copy in advance, before 6pm GMT on November 17. Your reward is to see your name printed as a Supporter in the limited first edition. The clock is ticking.

View Graham’s video today at Unbound Publishing, a new company under the patronage of Faber, the most prestigious publisher in Britain. Here you can purchase your book and enjoy other perks such as an invitation to the launch party. Join the clubbers at Facebook who are submitting their own photos and tales of merriment.

READ WHAT HAS ALREADY BEEN SAID
ABOUT WE CAN BE HEROES

➢ Unbound aims for 40 books in year one … Supported by Faber, the platform was created by QI writers John Mitchinson and John Pollard, and Crap Towns author Dan Kieran — The Bookseller

➢ Funded by the people — Channel 4 News video on “crowdfunding”, the process that decides when and how Graham’s book gets published

➢ Why creative clubbing ended with the 80s — the credentials that equipped Smithy, Sullivan and Elms (and a few other crazies) to start changing the world

➢ Boy George says the 70s were the best time ever to be a teenager — and Tweets that “it’s a brilliant book about the New Romantics! Really!” He has also written a foreword in We Can Be Heroes. (So have Gary Kemp, Steve Strange and Robert Elms)

➢ A slideshow of Graham’s Blitz-era gems at Guardian online

➢ Thirty years of punk and post-punk photo imagery — by Disneyrollergirl, one of The Times’ 40 bloggers who count

➢ A legacy that has inspired each decade since the 80s — Princesss Julia, international deejay and fabulous Blitz Club coat-check girl, writes for i-D about stripping away the posers’ facade

➢ Promo video for Blue Jean (1984) starring David Bowie as Screamin’ Lord Byron before a London clubland audience … Below is the alternate version of Blue Jean for MTV, starring Bowie and the Aliens, shot live before an audience in Soho’s Wag club, which was hosted for 19 years by Chris Sullivan

➤ The Bowie factor at the Blitz: glamour, drama and collage couture 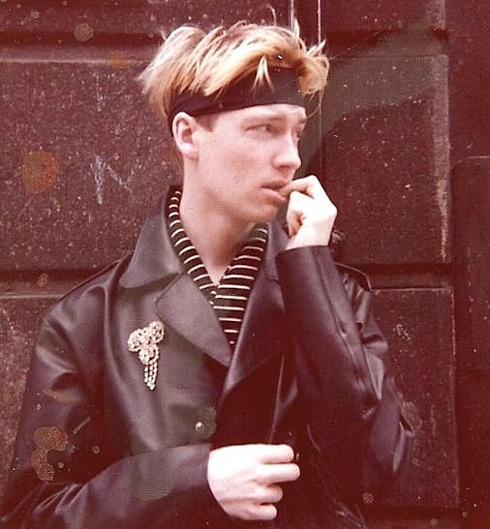 ❚ FOR TODAY’S HUFFINGTON POST, Iain R Webb, former Blitz Kid and later Times of London fashion editor, writes of the imminent photo-book about the tumultuous fashion and music scene that emerged from London’s Blitz Club in 1980. We Can Be Heroes by Graham Smith is a fascinating documentation of the demimonde nightclub scene from punk through New Romantic and out the other side… Webb writes:

“ It is certainly fitting that Smith has chosen the Bowie lyric as the title of his book because Bowie is to thank for inspiring the transformational theatrics employed by the Blitz Club regulars. In the early 1970s Bowie brought glamour and drama to rock music at a time when it was difficult to tell if the denim clad hairy on stage had nodded off during the drum solo. He was a shrewd style thief, an ardent advocate of collage couture. One of the only musicians to survive the vicious tongue-lashing of punk, it was Bowie who helped fuel the electro soundtrack of the 80s’ subterranean underworld. His Berlin trilogy of albums — Low, Heroes and Lodger — explored the neue world of Kraftwerk and machine Muzak. Although let’s not forget to credit Giorgio Moroder and Donna Summer who had been knocking out the electronic beats in the gay clubs of many a twelve-inch single ” / continued online 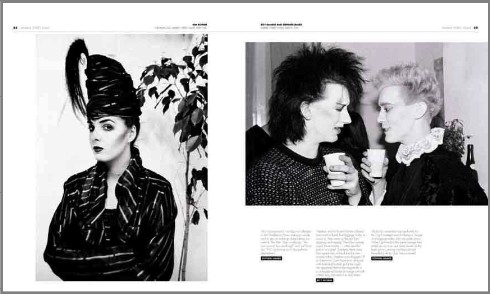 A sample spread from We Can Be Heroes by Graham Smith: his photos here show Blitz Kid style-leaders Kim Bowen, “Boy” George O’Dowd and Stephen Linard

❏ Will you help ensure publication of We Can Be Heroes by buying your personal copy today? Graham Smith’s book is the definitive history of early 80s nightclub music and style, which were the last manifestation of Britain’s collaborative youth culture. Alongside Graham’s superb photographs is racy text by Chris Sullivan, fabled host of Soho’s long-running Wag club, plus much other celebrity commentary.

Unbound is a new “crowd-funding” company run by three young dynamos well versed in publishing who are ensuring high-quality printing in Germany of this 320-page hardback using 180gsm paper, all in time for Christmas, priced £30. Visit Graham’s page at Unbound to discover why your immediate contribution towards the cost of the limited first edition is so important that the book will carry your name as an early supporter.

❏ iPAD, TABLET & MOBILE USERS PLEASE NOTE — You be see only a tiny selection of items from this wide-ranging website about the 1980s, not chosen by the author. To access fuller background features and site index either click on “Standard view” or visit Shapersofthe80s.com on a desktop computer. ➢ Click here to visit a different random item every time you click

Sullivan and Smith at last night's exhibition: man in the middle is king of the posers and Blitz Club host, Steve Strange. Photography by Shapersofthe80s

❚ THE HEROES SHOW IS ON THE ROAD. As of last night the Smith/Sullivan definitive history of 80s clubbing We Can Be Heroes had raised 36% of its “crowd-funding” target required to ensure publication goes ahead. Hence last night’s selling exhibition of Graham Smith’s photography from 30 years ago, most of which has never been seen. His family and friends joined the slebs at the party (video below) hosted by Inside Events in Notting Hill.

Smith said his favourite image on sale last night was on the cover of the book: showing Blitz Kids Clare Thom and a scene-stealing George O’Dowd claiming centre stage by gesturing with both hands and competely masking the face of the second girl beside him, designer Michele Clapton. (Prints are priced from £150 to £450 according to size — inquire by mailing to grsmith [@] mac.com)

+++
Smith was in the thick of the New Romantic underground taking photos as London nightclubbing revolutionised British pop music and made stars out of Boy George, Sade, Spandau Ballet and scores more new bands. Sullivan was a key player as stylist, host of Soho’s infamous Wag club for 19 years and leader of Blue Rondo à la Turk who had a 1982 chart hit with the soundtrack to our video, Klacto Vee Sed Stein. Broadcaster Robert Elms has written an intro, and there are forewords by Boy George, Steve Strange and Gary Kemp.

The 21st-century way to publish high-quality, short-run numbered editions is to secure sales in advance of publication. So visit Unbound Publishing to place your order which will secure your name in the first edition — and other perks.

Graham Smith in selling mode: can he persuade 22-year-old Bill de Melowood to buy his print of Steve Strange drinking with a bunch of Cardiff dockers? Photography by Shapersofthe80s

Partying family: Graham Smith and wife Lorraine at right, with their daughter Carla and boyfie John. Photography by Shapersofthe80s

➤ Boy George says the 70s were the best time ever to be a teenager — yep, really!

➢ The Guardian is the first paper off the mark to report Graham Smith’s imminent photo-book on 80s clubland, We Can Be Heroes — with an opinion piece today from Boy George

1980: Clare Thom, Philip Sallon and George O’Dowd on a coach trip to Margate. Photograph by Graham Smith/grsmith@mac.com.jpg from his book We Can Be Heroes

➢ We Can Be Heroes is a proposed “crowd-funded” book of pictures that won’t get printed until 1,200 people purchase a copy in advance. To contribute, visit Unbound.co.uk

❏ iPAD & TABLET USERS PLEASE NOTE — You are viewing only a very small selection of content from this wide-ranging website on the 1980s, not chosen by the author. To access fuller background features and topical updates please view Shapersofthe80s.com on a desktop computer