➤ Martin Kemp’s new hooligan movie all a bit too Lock-Stock for us! 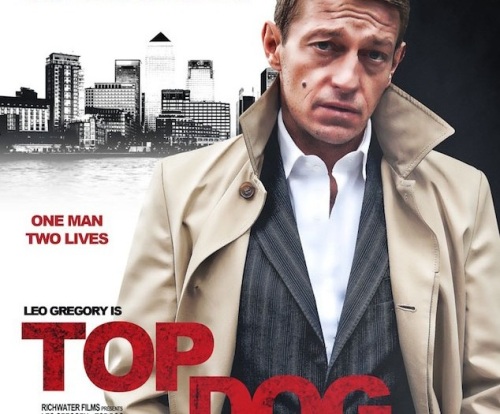 ❚ TO BE HONEST the trailer for Top Dog was way too visceral for Shapersofthe80s to view out from behind the sofa. Martin Kemp’s latest film as a director for Richwater films is described by its producer Jonathan Sothcott as “the definitive hooligan movie”. If you insist on watching the “all a bit Lock-Stock” trailer, be warned: gratuitous macho swaggering from the outset, plus bodies being broken! The Strong Men at GQ have this to say about it …

“ The British gangster genre is a tough nut to crack. Channel Four got it right with the excellent Top Boy, but cinema has often fallen short of the mark. For every Layer Cake and Wild Bill, there’s a thousand more films that just aren’t tough enough to survive in the world of dodgy East-End pubs and expertly tailored football hooliganism. Thank goodness, then for the release of Top Dog, a new British thriller adapted from the novel of the same name by Green Street’s Dougie Brimson. Starring Leo Gregory (a veteran of the genre after roles in Green Street and EastEnders) as a football firm leader who takes on more than he can handle when he tries to reclaim his family’s pub from a group of no-nonsense gangsters. While it may do little to change Britain’s reputation as a nation of football hooligans, for those looking for something to fill the void left by Gary Oldman’s 1989 original of The Firm and 2005’s Green Street, Top Dog is a tense, Elijah Wood-free alternative. ”

Top Dog is released in cinemas May 23 and on Blu Ray and DVD May 26.

➢ Previously at Shapersofthe80s: Catch up on the warts-and-all biopic about Spandau Ballet premiered in Texas 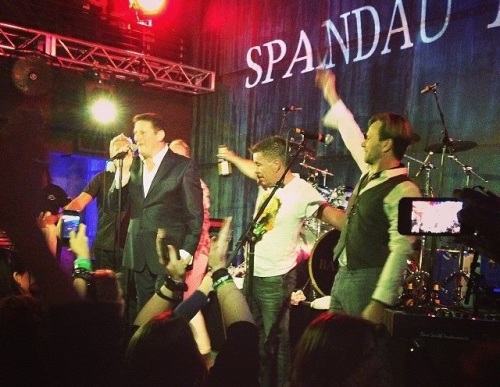 ➢ UPDATE – First official review of SBWW from Mel Brown at Facebook:
“ I’m a very lucky girl. Got to see the worldwide premiere of Soul Boys of the Western World. Truly amazing. An emotional roller coaster. This film is not just for Spandau fans, it’s for anyone who loves a good story of friends growing up together. Can’t wait for its UK release. Thanks guys! Looking forward to the first US show in 28 years tonight. ”

❚ AUSTIN, TEXAS, IS SIX HOURS BEHIND THE UK so any minute NOW the curtain is going up on the world premiere of Soul Boys of the Western World. The documentary movie made entirely from vintage footage follows the rise and fall of the five london schoolpals who became one the the world’s half dozen pop supergroups of the 80s. And in two hours’ time we’ll know how much of a tearjerker it turns out to be. Take it away, Tone! 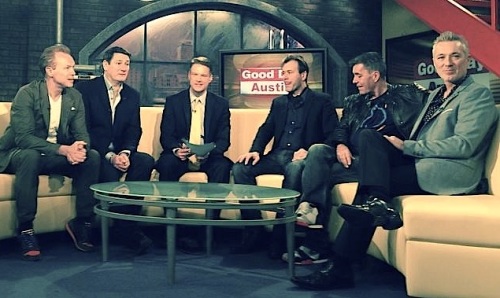 Spandau Ballet all together on the Austin TV breakfast show: first public reunion since the Reformation tour ended in summer 2010

➢ Tony Hadley on Facebook early today:
“ A tiring but extremely successful day 2 at SXSW. We spent pretty much the entire day from 7.30am to 6pm doing promotion for the movie. The feedback from all the journalists that interviewed us was fantastic and there will be some reviews online later. In the afternoon we had a couple of hours to head out and check our back-line equipment for today’s show at a rehearsal facility here. In the room next door there was Kanye West and Jay-z rehearsing.  Last night I had a chance to go and see London Grammar, Imagine Dragons and Coldplay playing at the iTunes Festival here. They all put on a great show.

“ Today is the main Spandau Ballet event…the premiere of Soul Boys of the Western World at the Paramount Theatre at 1400hrs. Very exciting!  Tonight we play our first show here in the US for 28 years at the Vulcan Gas Company and we are all really looking forward to it. I’ll let you know tomorrow how it went!! ”

FIRST SNAPS AFTER THE SCREENING 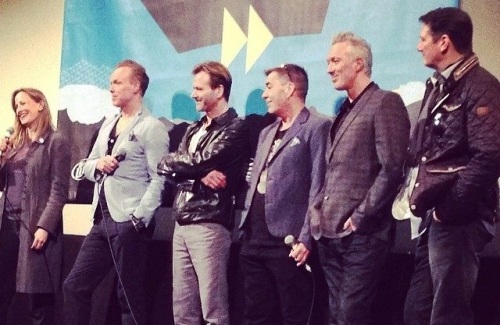 After the screening of Soul Boys of the Western World: Spandau invite a Q&A from the Paramount audience… Far left, the film’s director George Hencken

Today’s Tweet from Gary Kemp ‏@garyjkemp
– On stage with band and director @georgehencken for Q&A post screening. Thank you @sxsw, it was emotional. 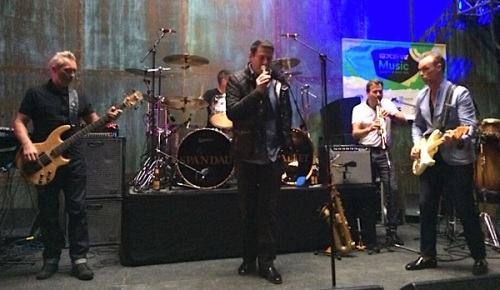 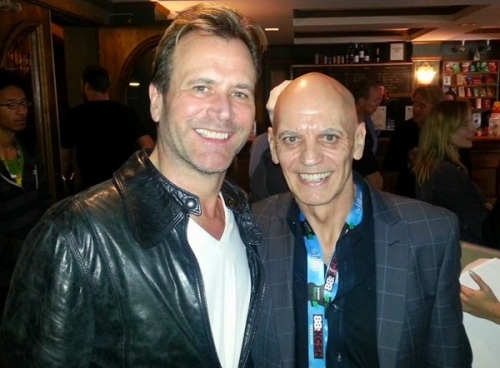 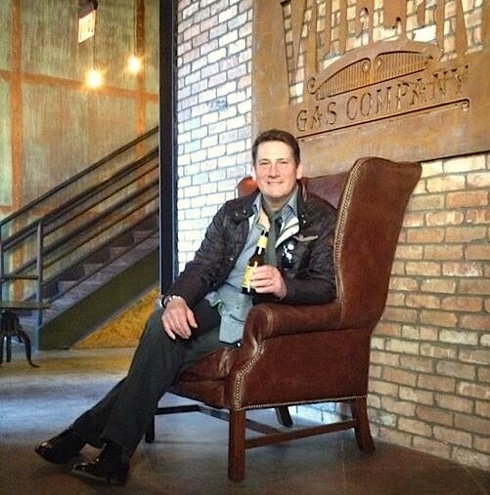 After the soundcheck for tonight’s Spandau show: Tony Hadley relaxing as Steve Norman takes the snap 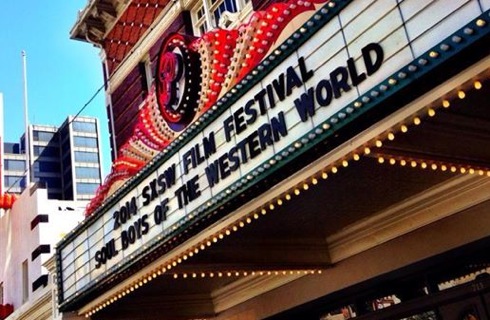 Marquee of the Paramount in Austin, Texas: Soul Boys of the Western World premieres today 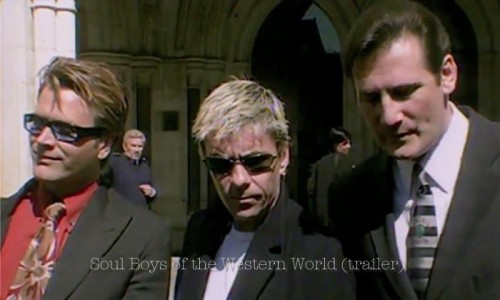 The defeated Norman, Keeble and Hadley outside the law court 1999: “You can see on our faces Spandau Ballet had just come to an end” 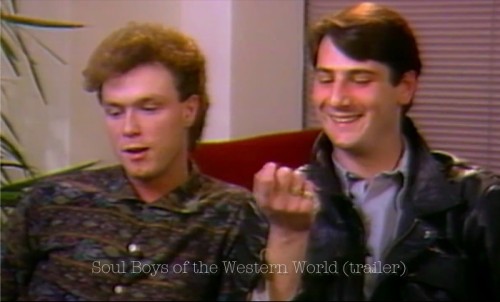 Hell freezes over as an interviewer asks: “Gary, you’ve been referred to as the driving force. What is the input of the others in the group?” Tony Hadley: “Ah-ha-ha!”

❚ WHAT A HAIR-SHIRT OF A TRAILER! Nettlesome would be a good word for the first glimpse we’ve been given this week of Soul Boys of the Western World, the warts-and-all biopic about the rise and fall (and rise again) of Spandau Ballet, which premieres next week at SXSW in Texas. The trailer rattles through the glorious birth pangs of a new fashion-and-music scene in the 80s and screeches to a standstill at the gaping open wound when the band decided in 1989 they really didn’t like each other any more.

For 20 icy seconds hairs rise on the back of your neck. A direct question in a TV interview blows a hole in Spandau’s credibility – Tony Hadley simply laughs, “Ah-ha-ha!” Before a another interviewer, the Kemp brothers dissemble about their acting ambitions. After a battle over money, three band members leave the law court defeated. And lifelong friendships wither before our eyes. John Keeble said this year: “It’s very honest and very difficult. It’s a film about redemption.” By God, it had better be. 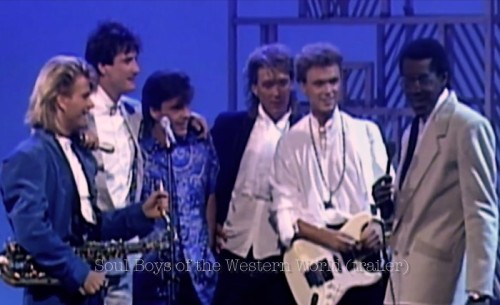 “These guys talk funny, right?” – Best of friends since their schooldays, Spandau Ballet star on Soul Train in 1985, at the height of their American fame 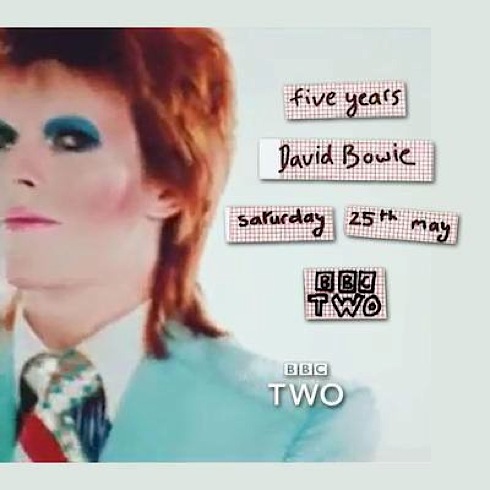 ❚ FRANCIS WHATELY’S DOCUMENTARY FILM David Bowie, Five Years: The Making Of An Icon has a transmission date – next Saturday on BBC2 at 9.20pm and next week’s Radio Times is publishing a cover feature. Beautifully edited, in both sound and vision, the 90-minute film explores five pivotal years in the singer’s career – 1971, 1975, 1977, 1980, 1983 – and features interviews with Bowie’s collaborators. Here’s the trailer:
+++

➢ Update May 26: Catch up on iPlayer with David Bowie, Five Years – A consummate TV documentary with unseen footage in pristine quality adds lustre to the current golden age for music docs … Watch Bowie’s musical collaborators on camera showing how they created their classic riffs… Wakeman on piano! Carlos on everything! Nile saying “I was as nervous as hell” Deeply satisfying. 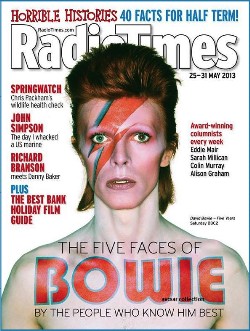 +++
➢ Nationwide part two: filmed in 1973 for BBC TV, it includes backstage reports from the May 25 show at Bournemouth Winter Gardens, UK 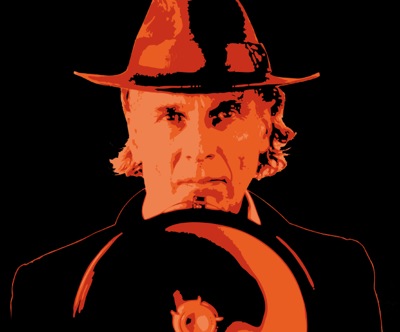 Pereno at the wheel: click image to view film trailer in a new window

➢ The trailer for this movie, The Promoter, says it all. Just watch, above. For more background click through to Wikipedia here

In a parallel car crash, the film’s website [2018 update: now defunct], used to say more than enough – instead today you’re being linked here to iMDB, which echoes much the same:

“Robert Pereno should be a household name,
yet every time he is on the brink of greatness,
he somehow manages to mess it up…
This is his story”

“ THE PROMOTER (76 mins, directed by Ed Edwards), Ragged Crow film production company’s 2nd Feature Film, is a cinéma vérité documentary about the extraordinary Robert Pereno which has just been officially selected for The London Independent Film Festival 2013, from thousands of international entries and is screening:

Infamous club promoter, actor and singer, Robert Pereno, who describes himself as a bi-polar, loquacious narcissist, is a seductive, charming and brutally honest man. The Promoter follows a year in his life….

Robert gives an overview of his past from a privileged up-bringing in ex-pat Calcutta during the 60s, to his foray into music, acting and clubland, where he promoted many top London nightclubs such as The Camden Palace, The Wag, Crazy Larry’s and SW1 to name a few.

Never lost for words, always with a quote and a handy aphorism, we see Robert ecstatic as he promotes his new Film Club at The Sanctum Hotel and Singer Old Fashioned Daisy Tallulah Johnson. Then, conversely in the pits of despair, when his addictive proclivities get the better of him, to capsize his projects, his marriage and his life.

➢ Previously at Shapers of the 80s – Robert Pereno: My road to recovery in the recession