➤ Steve Strange talkative as ever in his last interview

Steve’s tweet on 19 Jan: “Man overboard in the Red Sea”

◼ A VISAGE FAN HOLIDAYING in Sharm el-Sheikh in Egypt in mid-January asked Steve Strange for an interview and he gave one – his last, as far as we know. Maria Elliott from Huddersfield made the audio recording after she bumped into Steve by chance and realised they both had a love of Northern Soul and these are the reminiscences we can listen to after Maria submitted the recording to her community radio station PhoenixFM where she has become “part of the furniture”.

Maria says: “It was actually broadcast on the Thursday evening of his death before I found out. I was going to tweet Steve to tell him how he could listen to the show, then found out and was totally devastated.” Maria sent the audio file to Shapers of the 80s with the wish that it should reach Steve’s family along with her condolences.

She says: “My speech therapist put me in touch with Phoenix and the Parkinson’s disease society paid for me to attend a six-week course. Howard Priestley, who runs the station and presents a soul show on Thursdays 8–10pm, asked me to contribute to pre-recorded shows as I can’t really rely on my voice so Howard came up with the idea of recording little snippets and I sometimes call myself Missy Elliott.

“As for me and Steve, we loved the same music. In Egypt we were dancing on the top deck of this boat trip we were on, and we had a fab day.”

On Maria’s 11-minute recording we hear Steve loud and clear, talking 19 to the dozen, as ever. They discuss his teenage years hitch-hiking in pursuit of Northern Soul and how he became a dance champion. He also boasts about his fancy footwork impressing holidaymakers in Egypt: “Last night when I went out here I cleared the floor dancing. I can still move, but I can’t do the backflips.”

Steve’s tweet on 15 Jan: with friends at his hotel in Sharm el-Sheikh

MORE PIX FROM THE HOLIDAY IN EGYPT

❏ Debra Hudson wrote to Shapersofthe80s, 23 Feb: “My husband and myself met Steve and Maria [Elliott, see above] on holiday in Egypt. We spent two weeks with Steve up to 28 January and we have some fab photos and a lovely letter he wrote to me. He has touched my heart with laughter and kindness. It was lovely hearing the interview with Maria. Can’t stop crying now. There’s also a picture of Steve in hospital wearing my scarf he took off me, saying that it will be famous one day. He was right. Here [below] are some photos I took and from friends we also met.” 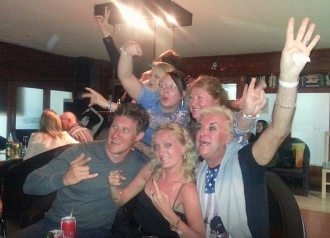 +++
➢ Previously at Shapersofthe80s: How Clare Grogan’s pop entourage put Capaldi on the road, plus an audio track with his band The Dreamboys

➤ Rusty and Steve raise a storm on the Croisette

Canvas-Club on the beach opposite Carlton Cannes hotel

❚ IN CANNES FOR THE FILM FESTIVAL TONIGHT? So are former 80s Blitz Kids, club deejay Rusty Egan and Spandau Ballet’s sax-percussionist Steve Norman, and you can catch their storming double act at the pop-up Canvas-Club on the beach opposite Carlton Cannes hotel, on the Croisette May 17–19… Then the pair move off to Ibiza where they perform fortnightly at the Nassau Beach Club on Playa D’en Bossa from May to Sept.

STEVE NORMAN RINGS IN TO REPORT:

“ Our first night was pretty relaxed. Cannes during the film festival feels fantastic. There are full-on business meetings day and night in the Canvas-Club where we’re jamming. The last time I was here was 2009 when Spandau announced we were going to make a film (and that is due out next year). But there was a completely different vibe at the Midem music festival where people do deals all day then let themselves go at night. For the film business it’s all deals. They’re not a club crowd, so we adapt accordingly.

“ Rusty is brilliant at gauging the audience’s mood, making a seamless transition from dinner table to dancefloor. He warmed up the dinner session lifting the pace gradually, then I rocked up about 10pm vibing on top of his music to kick things off into a Latin fury. We play a soulful mix of house music, quite funky but definitely not retro. Next we’re off to Ibiza – my second home, where I left a little piece of me – and we’re appearing fortnightly on Mondays at Nassau Beach Club from May 27 through till September. These places are springing up all over. It used to be a beach bar and has mushroomed into a nightclub on the sand. People will be chilling by day, then going for it by night. ” 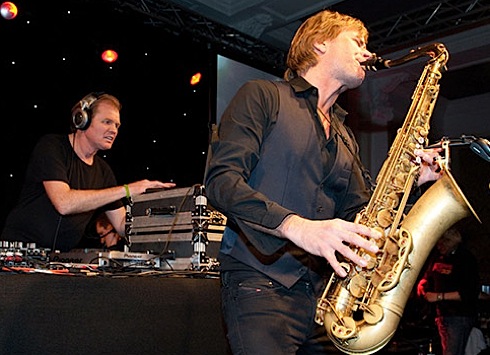 ➢ The Canvas-Club in Cannes requires membership – Restaurant service during the day, bar service with star deejays in the evenings.

➢ While he’s away catch Rusty’s Electricity Club radio show broadcast every Friday from midnight till 2am on Mi-Soul.com

➢ Catch up with Rusty’s Electricity Club shows on demand

Rusty adds: “I have been very busy writing and recording new music under the title Welcome to the Dancefloor and will be ready to release some stuff very soon. Visit Soundcloud to sample some.”

❚ ESSEX BOYS DEPECHE MODE TODAY offer an audio stream exclusively at Facebook as a taster for the release of their newest compilation album titled Remixes 2: 81–11, through Mute Records on June 6. Both of the early members of the band have contributed tracks to the album which covers three decades of music. Songwriter and synth pioneer Vince Clarke, who established DM’s identity in 1981 as the first techno-pop clubbers to break the UK charts, has remixed Behind The Wheel; and Alan Wilder has remixed In Chains. He took Vince’s place in the lineup from 1982, but in 1995 regretfully departed to pursue production and his solo project Recoil.

The mainstays of today’s band remain Dave Gahan (vocalist, who not long ago told Interview magazine “Depeche Mode music somehow appeals to the oddball”), Martin Gore (keyboards, here telling BBC 6Music about the places in the world that were crucial to Depeche Mode’s history — and the problem with the UK), plus Andrew Fletcher (keyboards and on-off manager). Depeche Mode are without doubt one of the greatest of British alternative bands, whose sound and image have grown darker and more provocative with the years. They boast 48 UK hit singles and international album sales said to total 100 million, among which 12 titles were studio recordings and four live.

The new release (left) comes in various formats: a three-disc version holds 37 remixed tracks, while a one-disc version has 13, spanning the decades from the 1981 debut Speak and Spell, through to 2009’s Sounds Of The Universe. Purists will welcome the 6 x 12-inch vinyl LP box set.

❏ Today at Facebook all 3,456,660 fans of the band’s page must have been attempting hear the free stream simultaneously because for a long while it became impossible to join up and listen to the Alex Metric Remix of Martin Gore’s 1989 song Personal Jesus. To ease the pain for DM fans who don’t belong to Facebook, here’s a quick clip:
❏ Update April 4 — Since last Monday 56,290 people have sampled the Alex Metric Remix just mentioned. Today, another track is being streamed free at Facebook from DM’s upcoming album, with more to follow on future Mondays. Here’s a taste of Martin Gore’s 1987 number Never Let Me Down Again in its Eric Prydz Remix:
❏ On May 14 Martin Gore and Andrew Fletcher will be playing DJ sets at Short Circuit which is a two-day celebration at London’s Roundhouse of Mute’s influence as a label, featuring performances, workshops, screenings and installations by its artists who include Erasure and Alison Moyet on the Saturday. Friday May 13 has Mute founder Daniel Miller deejaying as well as Moby, plus Richie Hawtin, Recoil, Nitzer Ebb and other acts. 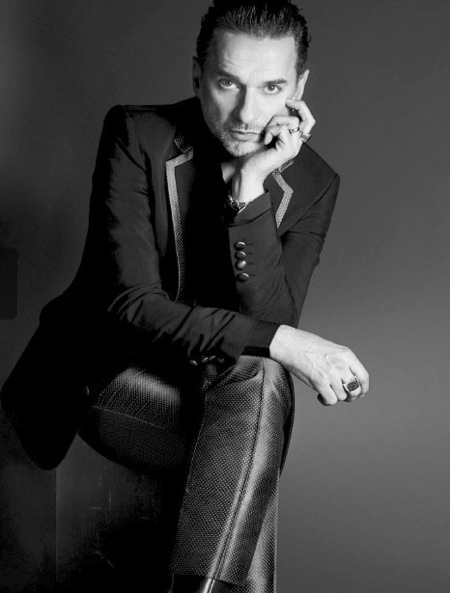