2022 ➤ Snatch your own Rondo moment at Sullivan’s solo show

❚ HOW CAN ANYONE RESIST Chris Sullivan’s quirky, cheeky take on Vorticism in his personal caricatures and portraits? “I’ve always been a big fan of George Grosz,” says the legendary Wag club host who first showed his painterly skills on the record-sleeves for his band Blue Rondo a la Turk back in the Eighties and more recently has returned to producing fine art (never forget he set out at St Martin’s School). This week he has a lively solo exhibition showing in Soho, at Cuts in Frith Street, on top of which he’s hosting a vodka & gin sponsored soiree tomorrow Wednesday 7th to shift his catalogue – and all are welcome.

I must of course declare an interest. A few years back Chris was fundraising for his book Rebel Rebel and first prize for the top donation was to have your portrait painted by Chris so I jumped at that. The result, after a lo-o-o-o-ng gestation period, proved compelling. More the rebel Bomberg than Grosz and utterly F.A.B. Never look for flattery in a good portrait, though many friends have said “He’s caught the eyes very well” and who am I to disagree?

➢ Previously at Shapersofthe80s: 2019, My own Rondo moment immortalised by Sullivan, the grand Wag of Soho

2021 ➤ Who can identify the face in this Bowie painting up for auction next week?

David Bowie’s collage DHead XLVI: portrait of an unidentified person… and the characteristic Bowie signature on the back

Updated on 25 June 2021
❚ A PAINTING BY SUPERSTAR DAVID BOWIE was found last summer in a thrift store for household goods and bought for just five dollars. Today it was put up for auction online and its top estimate of £7,200 was soon exceeded by four times that amount [19 June update]! After more than a week of bidding it sold on 24 June for £63,269 – a nine-fold increase on the upper estimate. The Canadian auction house hosting the online sale has not been able to identify the subject who is likely to have been among Bowie’s circle of friends during the Ziggy Stardust era as well as the mid-1990s when the painting was made. Take a guess and mail contact [a t] shapersofthe80s.com if you know who the friend might be. (Early guesses by a former UK Blitz Kid include Dana Gillespie and Lindsay Kemp – the gender of the subject is ambiguous.)

➢ Toronto’s local newspaper BayToday reports on
how the bargain was discovered. . .

Jeff Turl writes – “ It’s every bargain hunter’s dream… paying next to nothing but scoring big time. The buyer picked up the treasure, left in a pile of discarded goods in a thrift store, for just $5. The painting is valued at $12,000 (£7,200 GBP), its upper estimate, at Cowley Abbott’s International Art Online Auction from June 15-24.

The painting is titled, D Head XLVI and is a small 24.8 x 20.3 cm acrylic and computer collage on canvas, dated 1997. “The consignor of the painting was astonished upon viewing a label which read David Bowie and realized it was the signature of the artist inscribed on the reverse,” says Andrea McLoughlin, Cowley Abbott spokeswoman. The painting’s female owner has not been identified.

“Many people may not know that Bowie enjoyed painting, and between 1994 and 1997 he created a series of approximately 45 works on canvas which he titled Dead Heads (or D Heads), each with a different non-sequential Roman numeral,” explains McLoughlin. “The sitters ranged from band members, friends and acquaintances and there were also some self-portraits. It has been suggested that, for some of these important paintings, Bowie drew inspiration from the Ziggy Stardust era. With long hair and a pronounced profile, this energetic and enigmatic portrait is truly a rare representation from a celebrated artist.”

Paintings by the late music icon are rarely seen at auction, with the most recent sale of artwork from the D Head series fetching $32,000 USD ($38,861CDN) at an auction in the United Kingdom in 2016… ” / Continued at Baytoday.ca

In The Kemps spoof TV doc: this portrait was supposedly painted by Gary Kemp (BBC)

❚ ANOTHER SUN EXCLUSIVE WENT ONLINE simultaneously with last night’s TV “mockumentary” about the Kemp brothers of Spandau Ballet, The Kemps: All True. It saw brothers Martin and Gary mock themselves and featured a portrait supposedly painted by Gary Kemp of Hadley with red eyes, red horns and fangs. Their former singer who reported quitting three years ago declared that he’d rather watch Broadchurch than their TV show. The Sun Online reports Hadley as saying:

“ I wasn’t approached and would not have anything to do with it. I’m done. They want me back for good but it ain’t going to happen. I’d rather be happy on my own than be in that band again. If they want another lead singer, that’s their choice. But if you want to hear those songs sung by the original singer then you can only really see one bloke – and that’s me. ”

The Sun reports Hadley’s reaction to the Kemps using their hit Gold last month for a cheesy TV advert for the washing powder Bold. It saw Gold’s lyrics changed to “Bold”:

“ It’s embarrassing. I posted a social media disclaimer saying, ‘This was nothing to do with me’. Gary wrote Gold. It’s anthemic. When I sing it live, the audience sing back. To change the title is just weird. I thought it was in bad taste.”

➢ View The Kemps: All True at BBC iPlayer

◼ TWO OF OUR LEADING newspaper art critics have blown hot and cold over the new exhibition of David Hockney’s portraits titled Drawing From Life at the National Portrait Gallery in London. The Guardian’s Jonathan Jones awarded it five stars, raving in the most civilised way about the artist’s skill as a “graphic master” in this “the most dazzling display of his art I have ever seen”. Some praise!

However, the Times headlined its two-star review “Hockney gets hackneyed” while critic Rachel Campbell-Johnston complained that the show is repetitive: “less a fresh look at an innovative talent than a restricted rehash of what was just a small part of other previous shows”.

After two hours examining the 150 portraits large and small, many of them familiar images spanning six decades, I confess to having a foot in both camps. From the outset as a schoolboy Hockney’s eye for a spare line portraying fine detail was breathtakingly meticulous and, if you accept that capturing the eyes is the secret to any portrait, you will be thrilled to your imaginative roots by studying these 150 pairs of eyes up close! It’s a time-worn truism to say that you must visit an art gallery in the flesh because viewing reproductions in print or online can never do justice to an original painting or drawing. Here up close to Hockney’s strokes, in pencil, pastel, charcoal or etching, they are so evidently masterly, whether hair-fine or gesturally bold. The length of some lines is prodigious and intriguing to follow.

But yes, by the time I reached the final two rooms I’d already had enough, a mood that was visibly expressed there on the faces of the three friends who’d modelled for the great man for ever and again: onetime boyfriend Gregory Evans, designer Celia Birtwell and printer Maurice Payne. Hockney’s most recent frank portrayals of this visibly timeworn trio were not remotely flattering and they leave you wondering to what extent those forbearing friendships have been tested! Celia even told the Guardian her new chubby portrayal was “horrible” though conceding, “That’s life: One gets old”. 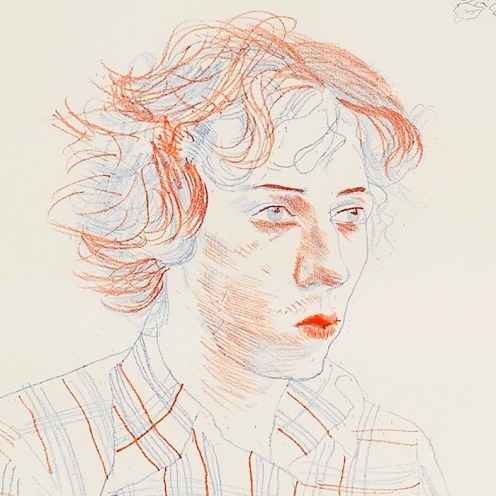 The final gallery in Drawing From Life: the most recent and frank portraits of Celia, Maurice & Co.

In her Times review, Rachel C-J was essentially dumping on the predictable curation of this NPG show and especially the “lacklustre finale” that had required Hockney to redraw each of his subjects during 2019. She readily acknowledges his master draughtsmanship and his preoccupation with eroding distance “so that we can all come closer together”. Intimacy and mood are the keynotes to portraying his friends and RCJ happily recognises the portraits of his mother too as “magically intimate, subtle and tender”.

Much of this goes for his expressive self-portraits, some of which we view on vertical video screens which animate their progress as iPad drawings and always prove mesmerising. Many of the self-portraits are intense, starting with a precocious clutch executed in his late teens. Jonathan Jones makes much of Hockney’s learning curve: “What makes this exhibition so staggering is the picture it builds of a man who has never stopped learning”, ever since Picasso’s work imparted to him the essence of simplicity. And of staying alive to the world around us. Do go. There’s always pleasure to be had from the detail in a Hockney. 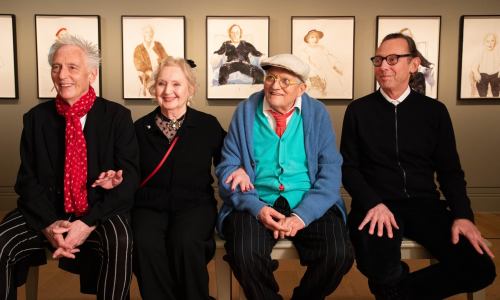 ➢ Hockney: Drawing From Life runs 27 February to 28 June 2020 at the National Portrait Gallery, before it closes for refurbishment

➢ Elsewhere at Shapers of the 80s:
1983, Britain’s favourite painter discovers a truer
way of seeing, with help from Proust