❚ NO OF COURSE MADNESS HAD NOTHING to do with the New Romantics but in the indolent UK pop scene of 1980, where most acts and record companies were as dull as ditchwater, only the bands on the cool Two-Tone label would really catch your eye and ear. Who could resist tapping a toe to this zany North London ska combo who scored nine Top Ten singles during the first two years of the 1980s, kicking off with One Step Beyond?!

Among even more hit singles, Our House made the UK Top Ten in November 1982 and became their biggest US hit. Today, during the Covid 19 Lockdown, the Madness boys have released a frantic #MadheadsOurHouse version after asking fans to have a go at re-creating the original Our House video [above]. They declared it “a thing of beauty!”.

Click any pic below to enlarge the Madheads in a slideshow

All pix from the MadheadsOurHouse video 2020 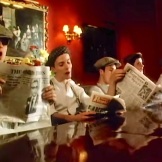 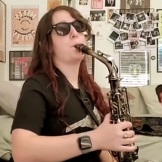 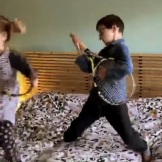 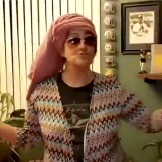 Yes, this is Suggs 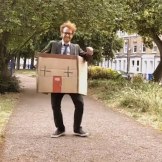 In The Kemps spoof TV doc: this portrait was supposedly painted by Gary Kemp (BBC)

❚ ANOTHER SUN EXCLUSIVE WENT ONLINE simultaneously with last night’s TV “mockumentary” about the Kemp brothers of Spandau Ballet, The Kemps: All True. It saw brothers Martin and Gary mock themselves and featured a portrait supposedly painted by Gary Kemp of Hadley with red eyes, red horns and fangs. Their former singer who reported quitting three years ago declared that he’d rather watch Broadchurch than their TV show. The Sun Online reports Hadley as saying:

“ I wasn’t approached and would not have anything to do with it. I’m done. They want me back for good but it ain’t going to happen. I’d rather be happy on my own than be in that band again. If they want another lead singer, that’s their choice. But if you want to hear those songs sung by the original singer then you can only really see one bloke – and that’s me. ”

The Sun reports Hadley’s reaction to the Kemps using their hit Gold last month for a cheesy TV advert for the washing powder Bold. It saw Gold’s lyrics changed to “Bold”:

“ It’s embarrassing. I posted a social media disclaimer saying, ‘This was nothing to do with me’. Gary wrote Gold. It’s anthemic. When I sing it live, the audience sing back. To change the title is just weird. I thought it was in bad taste.”

➢ View The Kemps: All True at BBC iPlayer

Is it a mockumentary? Spandau brothers reveal all to a Times Magazine journalist. (Photo: Mark Harrison)

◼ WE’VE SEEN A COUPLE OF GOSSIP ITEMS about the Kemp Brothers from Eighties supergroup Spandau Ballet making an oddball TV documentary, but now comes a cover story on a colour supplement no less, to spill more beans about it. Polly Vernon makes a neat job of interviewing the Angel bros, now aged 58 and 60, in Saturday’s Times Magazine, teasing out their lifelong sibling rivalries, keeping them on their toes as much as they return the challenge, songwriter Gary “less inclined toward affability”, she reports, and bass-player Martin “as gentle and affable as he is handsome”. Oh, by the way, did Polly mention he was handsome…? Here are some vital facts about the film satirically titled The Kemps: All True in an extract from her article…

“ POLLY VERNON WRITES: We have met so that Gary and Martin might promote the 60-minute film made for the BBC in which they play themselves – except, not really – going about their everyday lives (except, not at all). It’s a confusing proposition; part scripted, part improv, part biopic, part nonsense fabrication. Half-truths about the Kemps’ actual characters, histories, relationships and physical attributes meld with overblown fantasies about multiple kidneys and long-lost half-brothers called Ross Kemp. 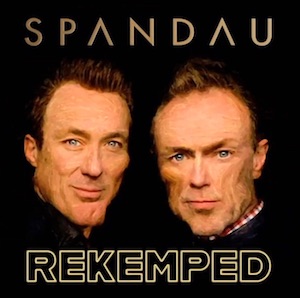 By definition, All True has none of the honesty of 2018’s Bros documentary, that heart-breaking, cringe-inducing, nostalgia-triggering film that documented Matt and Luke Goss’s real attempts to navigate their fraught sibling relationship, on which I’d assumed All True was based. (Gary is keen I know it definitely isn’t – All True was written before Bros: After the Screaming Stops was released – and he, Gary, hasn’t even seen that film. Martin has, mind. “It’s brilliant. That’s who they are, you know? I know them really well, and that’s who they are.”)

Furthermore, I can’t even really tell to which genre All True belongs. What are we calling it, I ask. A mockumentary?
“Hmmmm,” says Gary.
“Yes. That’s what it is,” says Martin, who is rapidly proving as gentle and affable as he is handsome.
“Oh, I’m not sure… Is it?” asks Gary, more interested in being perfectly, completely understood. “I don’t know. What else could you call a mockumentary?”
Uh, a comedy?
“Yeah, a comedy,” says Gary.
(“A comedy. Yeah!” says Martin.)
To be fair, despite it defying reason and categorisation, All True is very funny. Not all of it lands, nor is it precisely as Gary Kemp says he intended: “Like Larry David’s Curb Your Enthusiasm. Like the Steve Coogan-Rob Brydon thing [The Trip], you know.”

Some of it even ventures into comic genius territory… All True was conceived by director, writer and comedian Rhys Thomas (of Star Stories, The Fast Show and Nathan Barley). Thomas had worked with Martin Kemp, so when he approached Martin and Gary with a script for a show depicting a preposterous version of the brothers that, at the same time, wasn’t entirely removed from the truth, they said they’d do it. It seemed fun, they tell me – an opportunity to play with the world’s perceptions of them.
“French and Saunders do Gary and Martin Kemp,” says Martin.
“Our traits, but highlighted,” says Gary.
“Us, but on steroids!” says Martin… ” / Continued at Times Online

➤ Come on, Davie Jones – it’s time you cheered us all up

David Bowie telling a tall tale on TV: “He had seven daughters and seven sons. . .”

Self-reinvention is my middle name.
Ah, Benny Hill’s on. Excuse me.
Shush, I know that one. I can’t remember the title.

Don’t start. “Clean your desktop up!”
The things I could tell you!
I’m gonna get older and older and NEVER stop singing.

Shall I do Marcel Marceau?
Cashmere, cashmere!
I’m a bit of a Sunday futurist, you know.