WELCOME ➤ TO THE SWINGING EIGHTIES

In 1980 a youth movement began reshaping Britain.
Its stars didn’t call themselves New Romantics, or the Blitz Kids – but other people did. This writer was there and these words and pictures tell the tale.

◼︎ As a decade, the 1970s spelt doom. British youth culture had been discredited by punk. A monumental recession followed the Labour government’s “winter of discontent”, threatening the prospect of no jobs for years ahead.
+++

Yet from this black hole burst an optimistic movement the press dubbed the New Romantics, based on a London club called the Blitz. Its soundtrack was a pounding synthesised electro-pop created for the dancefloor by a studio seven-piece called Visage, fronted by the ultimate poser, Steve Strange. He and other fashionista Blitz Kids were picked by Bowie to represent their movement in his 1980 video for Ashes to Ashes (above). But the live band who broke all the rules were five dandies with a preposterous name: Spandau Ballet.
+++
As the last of the Baby Boomers, the Blitz Kids were concerned with much more than music. In 1980 they shook off teenage doubt to express all those talents the later Generation X would have to live up to — leadership, adaptability, negotiating skills, focus. Children of the age of mass TV, these can-doers excelled especially in visual awareness. They were the vanguard for a self-confident new class who were ready to enjoy the personal liberty and social mobility heralded by their parents in the 60s.
+++
For Britain, the Swinging 80s were a tumultuous period of social change when the young wrested many levers of power away from the over-40s. London became a creative powerhouse and its pop music and street fashion the toast of world capitals. All because a vast dance underground had been gagging for a very sociable revolution.

“From now on, this will become the official history”
Verdict of a former Blitz Kid.

➢ THE DROPDOWN MENUS ALONG THE PAGE TOP lead you to main topics. Choose “View full site” on your mobile.
➢ THE BLOG POSTS on this front page report topical updates which also link to the background pages in the menu.

❏ Below: View Blitz Club host Steve Strange in all his poser glory in the promo video for Fade to Grey (1982), also starring the club’s cloakroom girl, Julia Fodor, aka Princess

➢ CLICK HERE to run the anthemic 80s video ♫ ♫ from Spandau Ballet and feel the chant: 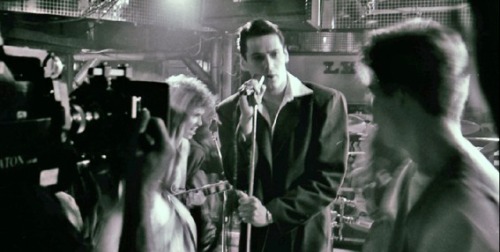 July 2, 1981: Shooting the video for Chant No 1 at Le Beat Route club in Soho, “down, down, pass the Talk of the Town”. Photograph © by Shapersofthe80s

❏ iPAD & TABLET & MOBILE USERS PLEASE NOTE — You are viewing only a very small selection of content from this wide-ranging website on the 1980s, not chosen by the author. To access fuller background features and topical updates please request PC version and Choose “View full site” – then in the blue bar atop your mobile page, click the three horizontal lines linking to many blue themed pages of background articles.
➢ Click here to visit another random item every time you click