➤ Crack open the Bolly: Ab Fab puts BodyMap back on the map 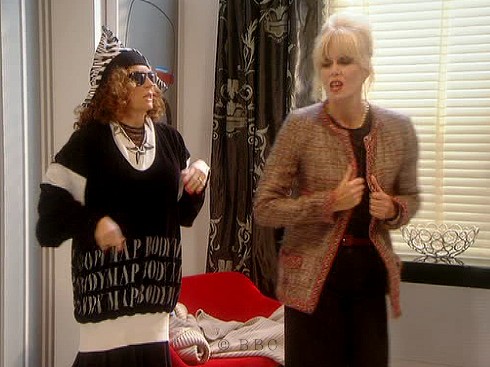 ◼ PRODUCT PLACEMENT DOESN’T COME better than this! On Christmas Day we saw the first of three new episodes of Absolutely Fabulous, the award-winning cult comedy series which ran from 1992 to 2003. It depicted the fashion-addicted lives of PR Edina, played by 80s Comic Stripper Jennifer Saunders, and her best friend, Patsy, the chain-smoking sex-mad magazine editor played by 70s Avengers star, Joanna Lumley. Today, New Year’s Day, we saw a second episode and look whose brand name was being lavishly displayed as Eddie swanned around in those distinctive head-to-foot knits from the Swinging 80s — the hottest label of its day, BodyMap.

Coincidence or design? Only last July David Holah put a load of classic BodyMap outfits into the Cavalcade of the 80s catwalk show at the Vintage Festival organised by Wayne Hemingway at London’s Festival Hall — and they didn’t seem to have aged one jot. One month later, the BBC began filming the Christmas specials. It pays, as they say, to advertise.

Cavalcade of the 80s at London’s Vintage Festival in July: a striking presence on the runway is the very same BodyMap ensemble worn later in Ab Fab on New Year’s Day. Picture courtesy David Holah

BodyMap was the game-changing fashion label launched in 1982 when ex-Blitz Kids David Holah and Stevie Stewart graduated from the trendy fashion course at Middlesex Polytechnic to have their collection instantly bought by Browns, the prescient South Molton Street shop. The pair immediately injected excitement into the fashion scene with daring designs as bizarre as their controversial catwalk shows, given titles such as Querelle Meets Olive Oil, and The Cat in the Hat Takes a Rumble with the Techno Fish. In 1983 they won the Martini award for the most innovative designers of the year and rocketed to international success as the British fashion scene became international news.

Knits, prints and stretch fabrics were restructured in men’s and women’s collections to map every part of the body, itself revealed by holes in unexpected places. Film-maker John Maybury supervised their outrageous videos (here the 1986 Half World collection). Michael Clark’s dance company can also take credit for promoting BodyMap’s overtly sexual appeal. By 1989 Holah & Stewart had opened their own retail outlet but the early 90s credit squeeze forced the company out of the competitive fashion business.

Since then David Holah has continued to design as a freelance and diversify as a printmaker. Stevie Stewart works with leading names in fashion, music, film and advertising as a fashion, costume, set and production designer. Popstar clients who have commissioned her costumes for world tours include Kylie, Britney, Girls Aloud, Westlife, Alexandra Burke, Cheryl Cole and Leona Lewis.

Last week Jennifer Saunders, who writes the Ab Fab TV scripts, revealed that the forthcoming big-screen movie will be set on the French Riviera where Eddie and Patsy go to a party aboard on an oligarch’s yacht. She told New York magazine: “I’m aiming to shoot this in a beautiful part of the Riviera. I fancy the south of France in the spring.”

Stevie Stewart and David Holah: a TV interview during London Fashion Week at the height of BodyMap’s success in 1984. Photographed by Shapersofthe80s

➢ Elsewhere at Shapers of the 80s: Eight for ’84 – BodyMap flavour of the season topping the labels international buyers tip for success 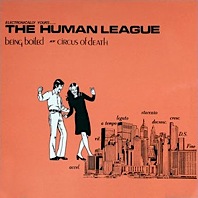 ◆ June 17 — Fast Product releases the darkly mystical Being Boiled by Sheffield’s original Human League, and Bowie declares it “the future of music”. John Peel also champions the single on radio and it becomes a cult among the Billy’s and Blitz clubbing circle in London, though it does not chart until January 1982 on its second release. In the present day this is considered to be the first massively influential British electronic pop track.
VIEW ♫ Being Boiled live in 1978 on Granada TV, though the audio is dire!
+++

◆ June — The mainstream deejay’s bible Disco International publishes a plain man’s guide by yours truly, titled Who are the New Romantics and how do they dance?
◆ June — John Boorman’s epic Arthurian movie Excalibur opens in London starring Nigel Terry and Helen Mirren
◆ June 4 — Steve Strange and Rusty Egan open Club for Heroes in Baker Street
◆ June 21 — Arty Latin popsters Blue Rondo à la Turk are unveiled in Chelmsford after weeks of secret tease dates. Yours truly is there to introduce the band to readers of New Sounds New Styles under the headline He thinks he is Geronimo but Chris Sullivan is turning fantasy into fact

◆ June 9 — Kasper de Graaf, editor of New Romantic magazine New Sounds New Styles, tells the Rebel Writers the title is to close and they are out of jobs. We retire to the Red Lion to seek consolation!
◆ June 14 — The Falklands War ends with the Argentine surrender. Its occupation of the Falkland Islands in the South Atlantic had provoked a war that lasted 74 days and results in the deaths of 260 Britons and 649 Argentinians
◆ June 21 — At the V&A the Middlesex fashion degree show is stolen by Stevie Stewart and David Holah. Their Matelots and Milkmaids collection establishes Bodymap as the label for the young and daring
◆ June 25 — As Haysi Fantayzee, Blitz Kids Kate Garner and Jeremy Healy release their debut single John Wayne is Big-leggy