❚ EVERY MEL BROOKS FAN knows the face of Cloris Leachman from her outrageous characters, the Transylvanian housekeeper Frau Blücher and dominatrix nurse Charlotte Diesel, so vividly associated with the director’s wild film parodies Young Frankenstein and High Anxiety in the mid-Seventies. Mere mention of stern Frau Blücher’s name caused whinnying horses to rear in fear, and only slowly does Dr “Fronkensteen” Junior work out who she is. “So you and Victor were. . . ?” he asks. “Yes, yes,” she replies. “He vas my… boyfriend.” Later in the Hitchcockian spoof set in an Institute for the Very, Very Nervous, the demented psycho who pronounced her name “Nursh Deezhel” did finally admit: “Perhaps I’ve been a bit too harsh.”

Leachman the actress died this week aged 94 and her dazzling career also embraced an Oscar-winning supporting role in Peter Bogdanovich’s The Last Picture Show, numerous TV residencies from Lassie and The Mary Tyler Moore Show and its spin-off Phyllis to The Beverly Hillbillies, plus cameos in so many TV hits that between 1972 and 2011 she was nominated for 22 Primetime Emmys and won eight. Her twilight years saw her portraying off-beat grandmothers in television and film and competing with celebrities less than half her age on Dancing With the Stars.

Cloris Leachman as the very strict Nurse Diesel in High Anxiety: viewed with Hitchcockian inspiration from beneath a glass coffee table

➢ The Last Picture Show made Leachman a star – Robert Berkvist in the New York Times: “But she may be best remembered for drawing laughs on Mary Tyler Moore, Phyllis and Malcolm in the Middle.”

➢ Star of film and TV who relished the roles of grandmas and grotesques – Ronald Bergan in The Guardian: “She played Mary Tyler Moore’s manipulative landlady Phyllis Lindstrom for which she was best known.”

➢ Winning the Oscar seemed to liberate Cloris Leachman – Obituary in The Times: “I’m at a point where I’m free to go out and have a little fun with my career,” she said in her acceptance speech.

➤ It’s A Sin reviewed: “Supporting the sadness there is an abundance of humour”

“ ❚ The much-feted writer Russell T Davies broke barriers with the pioneering British TV series Queer As Folk in 1999 and more recently with Cucumber, both lively depictions of gay life in contemporary Britain. Now comes It’s A Sin which focuses on a diverse group of gay friends mostly escaping from the familiar claustrophobia of suburban life (mostly closeted) and attracted to that well-trodden lure of big-city life. We are off to see the wizard, but this time we’re thrown back to 1981, the year of the first recorded British death from Aids at Brompton Hospital in London.

Ritchie (popstar Olly Alexander) is a gauche, attractive, closeted twink leaving home to study law in London, and his send-off from the Isle of Wight is a multi-pack of condoms from his bigoted dad (Shaun Dooley) as they both stress “It’s different on the mainland”. Roscoe (Omari Douglas) is a flamboyant young Nigerian whose strict religious parents are so fraught over his sexual orientation that he bolts defiantly before an intervention. Colin (Callum Scott Howells) leaves the Welsh valleys to lodge with a family and start his apprenticeship with a Savile Row tailor.

It’s A Sin: Lydia West as Jill emerges as the anchor for her hedonistic friends. (Channel 4)

Soon the group become fast friends with Ash (Nathaniel Curtis) becoming Ritchie’s first lover. We follow the group with Ritchie as lynchpin while his horizons broaden along with the thriving bar scene. Casual sex becomes addictive and flashes past in a blaze of encounters against a soundtrack of the hideous but popular Hooked on Classics.

A scene where Ritchie’s pals party at Heaven, the biggest, brand new gay club, was a baptism by sexual freedom for gay men in a pre-internet landscape including myself and friends. (My group Animal Nightlife played early concerts there along with Culture Club, Spandau Ballet and Musical Youth). The scene was blossoming through a whole network of bars and clubs. Safe sex had not yet been advocated, neither had the government’s “Don’t Die of Ignorance” leaflet campaign. It seemed to be abstain or die. Aids awareness was bad for business. As the Eighties proceed in the TV drama each gay character has to deal with the possibility of an early and lonely death if the dreaded health-test proved positive… ” / Continued at Apolarisview

➢ Previously at Shapers of the 80s: More background discussion about the making of It’s A Sin 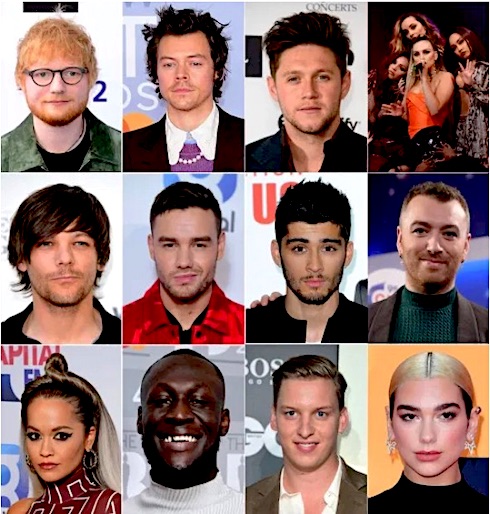 ◼ THE UK’S HIGHEST EARNING YOUNG MUSICIAN is Shape Of You singer Ed Sheeran aged 29, with a fortune of £200m, according to today’s 2020 Sunday Times Rich List Young 50 – the 30-and-under age group. He trounces his nearest rival among the under-30s, Harry Styles, by £137m. Ed is also the youngest person on the main musician list, tied with Sir Rod Stewart and Sting. 32-year-old Rihanna comes second in the main list with £468m, thanks mainly to her Fenty cosmetics brand… In the Young 50, Harry Styles tops fellow Directionists with £63m while the Little Mix girls come in as a group at number four with £48m between them and Sam Smith is at number eight with £33m.

Topping the actors in the Young 50 is Harry Potter’s Daniel Radcliffe, 30, with a £94m fortune. His co-star Emma Watson, also 30, follows with £52m and they are placed ninth and eleventh overall. Model-turned-actress Cara Delevingne, 27, is listed worth £27m, while Aaron Taylor-Johnson, 29, who starred in the Kick Ass films, clocks £24m. Star Wars actors Daisy Ridley and John Boyega make the list for the first time, both worth £17m each.

Sport dominates the Young Rich List with 18 of the 50 places. Ranked at number seven is Welsh footballer Gareth Bale as the richest young sportsperson on £114m.

➢ Previously at Shapers of the 80s:
Rich List puts George Michael top of the popstars
from the un-lucrative 80s – flashback to 2010