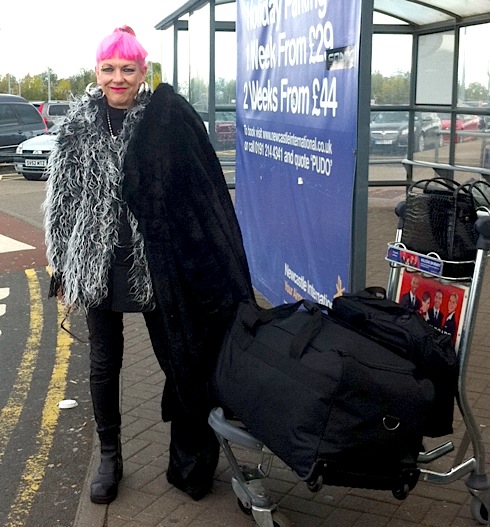 The Great Escape, 2011: Judith Frankland prepares to break out from Newcastle at dawn this morning within the 20kg baggage allowance. Photograph by Joanne Lodge

❚ MOST OF BRITAIN MAY BE SWELTERING in a historic autumn heatwave. Yet Judith Frankland, the ex-Blitz Kid fashion designer, flew out of Tyneside this morning to establish her business in Germany swathed in vital garments she couldn’t pack within the 20kg baggage allowance. “This is my idea for getting as many clothes onboard as possible,” she said. “I’m wearing three topcoats: first a black full-length fake-fur, then stuffing myself inside a black lightweight down to the ankles, then the grey mountain-goat shortie. On top, loads of jewels of course, and in the pockets loads more bling. Down below, I’m in leather biker’s pants, heavy and warm, plus Harley Davidson boots.”

Biker leathers, darling??? “No of course I’m not going bikey, don’t be daft! They are simply so warm and cost only 50p brand new in a car-boot sale. I know I’m going to get beeped at security for my jewellery — changing planes last time at Schiphol, my steel-tipped stilettos set off the alarm. But if they stop me, I’ll be prepared for them, like Maria von Trapp. I’m going to say I’m anorexic and feeling the cold.”

This is how an upstart style princess prepares herself for Berlin, plus new-look hair, cut last night and freshly rinsed pink. She means business. A modest container is already being shipped by Voovit, bringing Judith’s sewing machines, her dramatically retro promotional collection for The Woman Who Likes To Say Hello shown this year in Newcastle upon Tyne, plus a ton more bling (she does have a way with black baubles and gilded chain). Yes, this is the great adventure to build a new life for one of the wild children of the Swinging 80s whose best break came the month she graduated from Ravensbourne art college when David Bowie dropped in at the Blitz Club and chose to put her and her clothes in his landmark video for Ashes to Ashes. [And which Shapersofthe80s displays as the picture heading this website. The New Romantics were utterly in thrall to Bowie.]

+++
Having taken the temperature of Berlin on an exploratory trip this July, Judith has been scouting the smart district of Prenzlauer Berg for a workshop-cum-living quarters, with another eye on up-market boutiques through which to retail in the short-term.

Judith says: “My main plan is to create high fashion for women who love clothes that are beautiful but avant-garde and might even be called art. I’ve left England to seek fresh inspiration and shall be presenting my outfits next season in Paris in order to re-establish links with buyers who don’t visit London — from Japan and the Far East, for example.”

Judi’s lesson learnt in July: in Berlin an umbrella is no protection from the elements. Photograph by Shapersofthe80s

It is eight years since Judith’s previous bespoke design business blew up in her face. She has described on her blog at The Swelle Life how the American backer behind her Paris-based atelier suddenly got cold feet and hot-footed it back to the States, leaving Judith as the designer holding the baby. This more or less coincided with her mother’s health failing, whereupon Judith returned to Tyneside to care for her.

In Berlin, Judith has not been short of advice from friends made during her ten-year spell in Milan in the 90s designing and hosting nightclubs. Several friends are now relocated to Berlin, including photographer and videographer Sandro Martini. The Dutch costumier Eppo Dekker, who has a boutique called Prêt-à-Couture in Friedrichshain, has also been helping Judith make contacts in the city. Immediate plans include designing stage-wear for the underground performer Antal Nemeth.

“Meanwhile,” Judith says, “this weekend I’m heading down to a vintage Zupermarket run by the Sameheads brothers — they say rich ladies bring in their sparkly clothes for sale and nobody goes away unhappy.”

London’s Cafe Royal, 1980: Judith’s graduation show from Ravensbourne college of art caused a sensation with a glamorous evocation of the 50s in black and white taffeta, brocade, velvet and satin. Its climax was this black wedding dress worn by Sheila Ming, gloriously crowned by Stephen Jones’s veiled head-dress made of stiffened lace on a metal frame. Blitz club host Steve Strange was later to wear it in David Bowie’s video for Ashes to Ashes. Photographed © by Niall McInerney

➤ A swelle hello from upstart Judith, returning in an explosion of colour

Blitz Kids chosen by Bowie to star in his Ashes to Ashes video, 1980: Darla-Jane, Steve, Judith and Elise with Bowie at centre as Major Tom. © EMI

❚ WE ALL REMEMBER DESIGNER Judith Frankland’s nun-like appearance in David Bowie’s Ashes to Ashes video in 1980 alongside Steve Strange who was wearing her infamous black wedding dress. Tomorrow Judith unveils her first women’s collection in eight years at the Holy Biscuit gallery in Newcastle upon Tyne, in a week-long show by a mixed group of women artists. She says her new outfits are designed for “The Woman Who Likes to say Hello!”

They are joyous explosions of colour that, she insists, “come from within my well travelled head” — and here we’re talking the shock tactics of an eternal punkette, whose own looks veer between the immaculate cool of revue star Bea Lillie and the fruitiness of dancer Carmen Miranda. At the height of the Blitz club’s notoriety, Judith’s playful yet tailored outfits adorned Steve Strange as vocalist with Visage to become some of the most distinctive styles of the New Romantics movement. Most memorable was the taffeta jacket with medieval flourishes on the cover for Fade to Grey. 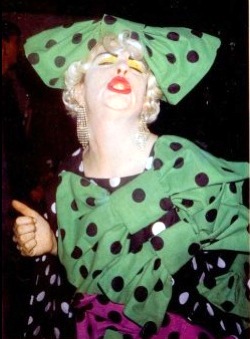 Where did the last 30 years go for Judith? She has lived more lives than the rest of us ever will, in a whirl of bespoke design partnerships and nightclub promoting from Vancouver to LA to Milan to Paris, fuelled by acerbic wit and a mighty big heart. With such landmark clubs as Pussy Galore and Chocolat City, the Italians branded her one of “i guerrieri della notte” — the warriors of the night.

In the end she returned to Tyneside to look after her ailing mum, and only now has she found the time and energy to return to the fashion fray. Judith’s last business was based in Paris and that’s where she plans to return next year. The new Winter 2011/12 collection is a modest calling card that exploits a secret stash of “school-blazer fabrics” in stripes and vibrant colourways. Judith has suffused uniform wool suitings with a positively romantic glow.

With the left hand, she has been contributing to a smart new blog called The Swelle Life, run by writer-photographer Denise Grayson. Here in her own uninhibited confessional style, Judith pays generous tribute to the inspirational circle of friends she has acquired on her travels.

Judith’s nun look from 1980, left, echoed in 2011, right. After fashion, her second passion is the film The Sound of Music. “I hate revisiting the past,” she maintains, but for her Swelle Life blog, she couldn’t resist accessorising this vintage German skirt with her own nun’s collar and cuffs. Photographs by Derek Ridgers and Denise Grayson

From Judith’s 2002 collection while living in Paris: her apartment in rue Montorgueil just by Les Halles converted into a showroom during fashion week

A couture original: When Shapersofthe80s visited Judith’s Old Curiosity Shoppe of a home last summer, she showed off the latest treasure acquired from her local thrift shops, this Lacroix coat, priced 25 pence! Photographed © by Shapersofthe80s

➢ HERE’S HOW JUDITH INTRODUCED HERSELF
AT THE SWELLE LIFE BLOG

“ I’m an upstart and a woman like many who loves — and in my case lives — fashion and the world that lurks around it, a world I have stepped in and out of all my life. I have an excitable, excruciatingly inquisitive mind; I never stop thinking, plotting and some would say talking! I am not a lover of the term ‘On trend’; I like to say ‘On form’. Micro mini to maxi. If it feels right on the day I’ll wear it — no sheep mentality for me. I mix bargain buys, charity shop finds and my own creations. ”

London’s Cafe Royal, 1980: Judith’s graduation show from Ravensbourne college of art caused a sensation with a glamorous evocation of the 50s in black and white taffeta, brocade, velvet and satin. Its climax was this black wedding dress worn by Sheila Ming, gloriously crowned by Stephen Jones’s veiled head-dress made of stiffened lace on a metal frame. Blitz club host Steve Strange was later to wear it in David Bowie’s video for Ashes to Ashes. Photographed © by Niall McInerney 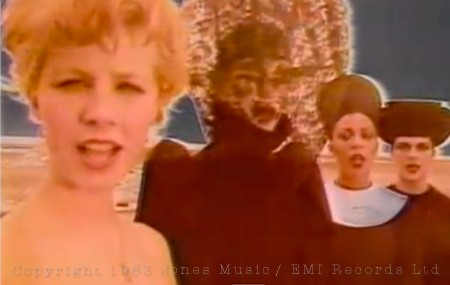 On the beach at Hastings filming Ashes to Ashes: Judith (right) in the ecclesiastical habit Bowie had seen her in at the Blitz, with Steve Strange (second left) in Judith’s black wedding dress he’d also worn that night (head-dress by Stephen Jones). Elise and Darla-Jane wear their own outfits. What with the shingle and the quicksand and Steve trying to outrun the bulldozer, Judith says the wedding dress was completely destroyed. © EMI