1980 ➤ One week in the private worlds of the new young 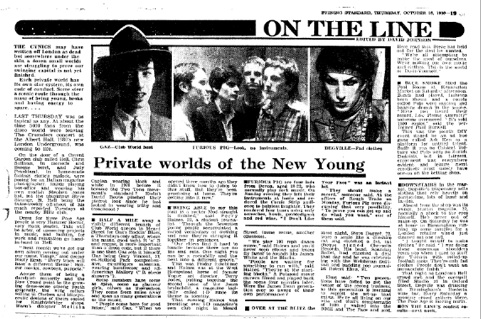 THE CYNICS may have written off London as dead in 1980 but somewhere under the skin a dozen small worlds are struggling to prove our swinging capital is not yet finished. Each private world has its own star system and its own code of conduct. Some steer a scenic route through the maze of being young, broke and having energy to spare

Judi Frankland in one of the clerical cassocks from her degree show summer of 1980, pictured by Derek Ridgers. Style commentator Perry Haines, by Simon Brown

◼ LAST THURSDAY was as typical as any. At about the time 5,000 fans from Disco World were leaving The Crusaders concert at the Royal Albert Hall, 1980’s new London underground was coming to life. On the door of a Covent Garden club called Hell, Chris Sullivan, in monocle and Basque beret, and Judi Frankland, in the home-made clerical cassock that she’d worn in Bowie’s video for his chart topping Ashes to Ashes, were posing for an Italian magazine photographer. Inside, playing box-office and wearing his own modish Stephen Jones hat and all too visible makeup, sat the ubiquitous Steve Strange, 21, Hell being the twice-weekly off-shoot of his much reported Tuesdays at the nearby Blitz club. For him, he said, dressing up is a way of life. “I don’t do it to get attention.” . . . / Continued on our inside page

➢ Read on inside Shapers of the 80s:
A rich slice of London life in 1980 – one week, a dozen prodigies setting the town ablaze, none of them over 22