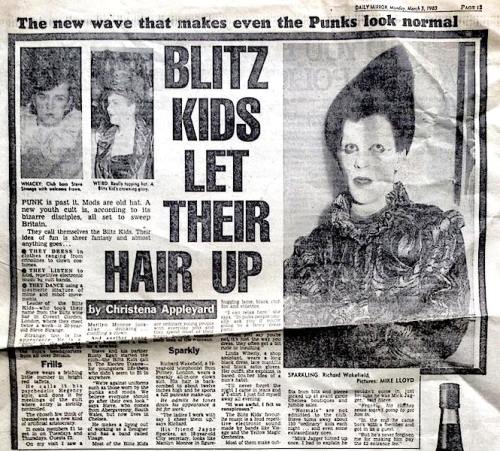 ◼ IT WAS MARCH 1980 WHEN the term Blitz Kids was first used to describe the “weird” and “whacky” young people making waves with their in-flight haircuts at the Tuesday club-night in London’s Blitz wine bar. The cutting here from the Daily Mirror says it all: in those days the left-wing tabloid sold 3.6million copies daily and was still taken seriously for its news coverage, while the Sun was just overtaking those sales figures with a distinctly down-market approach. Newspapers were a mass medium back then.

Using the lively wide-eyed language of the red-tops, Mirror feature writer Christena Appleyard put her finger on exactly those elements of individualism and waywardness that would later the same year see the Blitz Kids renamed the New Romantics. What she completely omits to mention is that four days later the house band of the Blitz, Spandau Ballet, were playing only their fourth live gig in London, at the trendy Scala cinema. In fact, she doesn’t even mention the band alongside Visage and Yellow Magic Orchestra as part of the club’s “electro diskow” synthesised soundtrack.

Appleyard was a savvy writer hearing only one part of a genesis story, yet her headline put the Blitz Kids on the media map and Boom! – this was lift-off for the careers and reputations of about 50 cool clubbers
in the short term, and a whole new look and sound for UK pop culture generally.

Julia Fodor is part of the founding mythology of the Blitz Kids, and tonight in London she was giving an illustrated “audience” to a select crowd in Hoxton. At The Glory pub she was reliving her teen years as mannequin de vie for PX, the New Romantic clothes shop, and as Blitz Club cloakroom girl, who later became a cultural commentator and international club deejay who at her height was being helicoptered into Paris to play at the posey Queen nightclub on the Champs Elysées.

And Julia’s rise was the norm for those key Blitz Kids with ambition and attitude in 1980. Before that March you could count the media mentions of Steve Strange’s club night: three in the Evening Standard; a page in Tatler; a feature in New Society, the sociology weekly; and a feature about “chiconomy” in the March issue of 19, the teen magazine.

Then Boom! The Blitz Kids headline triggered a small rash of media outbreaks as two perceptive photographers visited the club to take pictures – Homer Sykes and Derek Ridgers – while student journalist Perry Haines featured his Blitz pals in the Evening Standard fashion pages. What put Spandau Ballet on the map, however, were reports in the Standard, the Daily Star and Record Mirror of their electrifying concert, complete with ornamental Blitz Kids dancing in the aisles to a whole new style of music-making – theatrical, romantic, fashion-conscious and danceable – that resulted in a second Scala concert being scheduled for May.

Reading about the Blitz phenomenon had intrigued a young researcher on Janet Street-Porter’s yoof documentary slot, 20th Century Box, at London Weekend Television which then commissioned the May replay for their cameras. In the meantime one alert talent scout at Chrysalis Records also wanted to hear the band’s music. The next few months saw the Blitz Kids start to gobble up column inches and enliven the odd TV strand, while the two coolest magazines of the decade, The Face and i-D, were launched specifically to report this burgeoning youth culture based on street style.

Spandau landed the first contract for a New Romantic band in October, while Visage released its first album in November after signing to Polydor, and the Romantic band-wagon was under way. By Christmas 1981 the sound of the UK pop charts had been transformed completely from rock guitars to bass and drum.

❏ Tonight and for two more Mondays, An Audience with Princess Julia celebrates London’s glorious counter-culture with extracts from her own memoirs supported by visuals by her friend, deejay and face about the club scene Jeffrey Hinton. Tonight Professor Iain Webb also participates, with bespoke accessoriser Judy Blame on Nov 16 and milliner Stephen Jones OBE on Nov 23 – all at The Glory, London E2 8AS.
➢ Tickets available only in advance via Ticketweb

Julia talks: adorned in a kind of Baby Jane pink ruffled nightie by Ryan Lo, from his SS16 collection, with cap of roses (inset, being snapped by Louie Banks)

Princess Julia opens her talk: a 3D printed crown signifies her role as a leader of London’s nightlife aristocracy, while she sports red and back dip-dyed denim over-jacket with bell sleeves, black net gown and tie-front knickerbockers, all by Ed Marler from his SS16 collection