1980s ➤ The Ridgers lens lays bare the pursuit of love 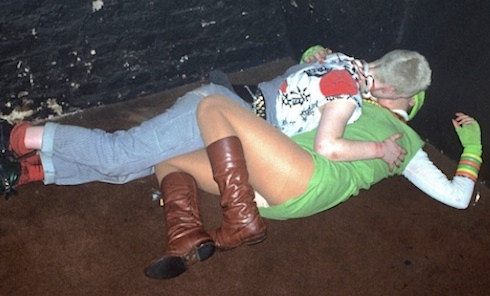 ◼ IF THIS PHOTO SHOWS YOU perfecting the horizontal jig in a London club in 1984, you’ll find yourselves immortalised in the latest book by photographer Derek Ridgers, titled The Others. The collection captures young love in all its clubland guises and if you spot yourself in this gallery why not email info [a t] idea-books.com and ask to come to the London launch this Thursday, 19 Nov?

Between 1980 and 1986 Ridgers and his candid lens couldn’t help following the pursuit of romance among the lovers, the loveless, the lonely and the last to leave in nightclubs as disparate as Gossip’s, Planets, Great Wall, Batcave, Feltham Football & Social Club, Flick’s, Lyceum, Le Beat Route, Camden Palace, Taboo and many more.

These snogging couples represent Britain’s many subcultural tribes who expressed distinct affinities in the early 80s through personal style and musical tastes. The book’s foreword says its intriguingly contradictory title describes the “other” clubbers who had enough attitude *not* to get rejected by the greeters on the doors of London’s finest clubs. It would make more sense to call these kids The Chosen Ones. Once inside a club, however, they got their priorities right and relegated posing into second place behind the down-to-earth goal that was really on their minds.

The Ridgers images capture all the fun and frailty and the frissons of exploring your youthful identity among like-minded tribalists in ways the publisher was probably trying to nail: a sense of “otherness” that characterised many subcultures in that austere and intolerant era. Whether brave or tentative, outsiders or players, they were helping shift attitudes in dark and stylish cellars across the land. They re-energised Britain by mobilising the talents in which the young excel: through music, clothes, haircuts and romance.

The Others is priced £35 for 124 pages in a limited edition exclusively available at Dover Street Market London and New York, Ginza and the Comme des Garcons Trading Museum in Paris, as well as Marc Jacobs’ Bookmarc stores in New York, Los Angeles, London, Paris and Tokyo. And online from Idea Books. 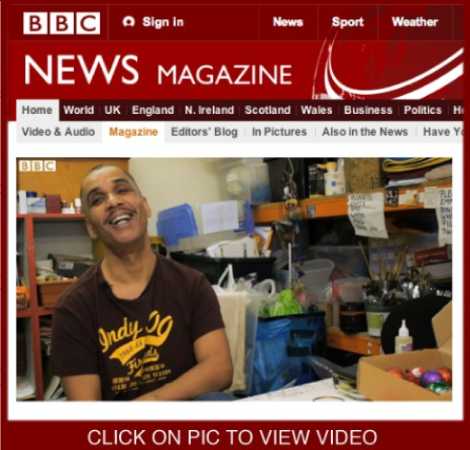 ❚ WHERE’S THE COOLEST CHARITY SHOP IN THE LAND? Dalston obviously, where the Oxfam shop on Kingsland Road in east London has become a destination thanks to its regular one-day sales of designer garments. Come Christmas, its volunteer Visual Display Manager finds himself in a BBC video head-to-head with the most famous shop windows in the land over at Harvey Nichols in Knightsbridge. It’s a case of East End boy versus West End twirls and the EastEnder in question is none other than Andy Polaris, former singer with 80s soulsters Animal Nightlife.

The BBC Magazine video shows how the award-winning team at Harvey Nix studies the seasonal fashion trends to arrive at a mood-board of imagery that then inspires their window displays for the all-important festive marketing push. In Dalston, by contrast, Andy turns to what’s currently in stock for inspiration and leads off on a theme of gold for his Christmas windows relying, he says, on “colour, light and perspective” – and a surprise last-minute donation. 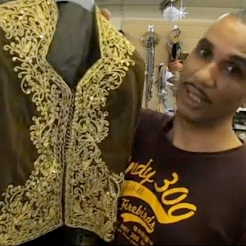 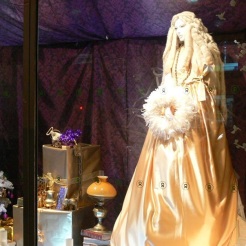 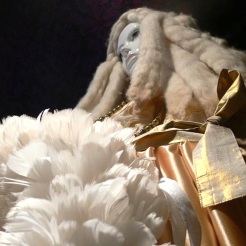 80s club host Scarlett Cannon wears Hermes on the cover of Iain R Webb’s new book: “One of the things I love most about this photograph is that David just drew around Scarlett and darkened the background with a pencil to make her stand out more.” (Photograph by David Hiscock. Make-up, William Faulkner)

❚ FINALLY A BOOK ABOUT THE 80s without George O’Dowd’s face on the cover! Here comes the other version of the Swinging London of 30 years ago, created by the fashionistas, rather than the music entrepreneurs, and the face of Cha-Cha club host Scarlett on the cover defines another version of events exactly. It comes just in time to chime with the V&A’s second landmark exhibition this year. From July 10, following the Bowie extravaganza, comes Club to Catwalk: London Fashion in the 1980s, which includes a display of denim jackets commissioned in 1986 by Blitz magazine from key London-based designers. Who better to sort the Who’s from the Who Nots than one of the seminal clubland Blitz Kids, Iain R Webb.

During those fertile years in the re-energising of the capital’s youth culture through nightlife, when he shared a flat with fellow St Martin’s design students Fiona Dealey and Stephen Jones, Webb says his peers were “cultured clubbers – our aim was to push the parameters and explore the ideals of glamour, imagery, sexuality and taste. We were determined to challenge the status quo and maybe even change the world, even if ‘just for one day’.”

Webb: from Blitz Club to The Times

Having studied fashion at St Martin’s, Webb says he “fell into writing” and went on to become fashion editor of Blitz magazine, the Evening Standard, Harpers & Queen, The Times and Elle.

This week his new book, As Seen In Blitz: Fashioning 80s Style, went off to the printers, to be published in April by ACC (272 pages, £27.30 pre-order price). With previously-unseen archive content and much oral history from key designers, it chronicles the fashion pages Webb created for Blitz magazine 1982–87, after the New Romantics fad had died the death. Webb’s subversive images gave free rein to the imagination and involved a global cast of designers including Comme Des Garcons, Jasper Conran, John Galliano, Jean Paul Gaultier, Katharine Hamnett, Hermes, Pam Hogg, Marc Jacobs.

Webb says: “The book has over 100 contributors – designers and photographers from the Bodymappers to Nick Knight, and loads of models, make-up and hair peoploids in between.”

At its launch in 1980, Blitz magazine posed little threat to the fondly remembered Face magazine, which majored on music and style. Blitz wandered a disparate social world of its own well to the west of the Soho trendsetters – but eventually, under the influence of Webb, photographer Knight and other cool arbiters of taste, it gradually clicked into the Swinging London groove that saw the UK capital become a crucial stopover for the world’s media and buyers during the biannual round of international fashion shows.

Webb himself went on to win the Fashion Journalist of The Year Award in 1995 and 1996. Today he consults for the Fashion Museum in Bath and is a visiting professor at Central Saint Martins, LCF and the RCA.

➤ Aaaah, bricolage, stealing and pasting — all the fun of postmodernism on show at the V&A

+++
➢ View Sarfraz Manzoor’s Guardian video in which he meets co-curator Jane Pavitt and others at the V&A’s new show in London, poses such questions as “What does Grace Jones’ maternity dress have in common with a Day-Glo toaster and a chair made from a gas pipe?” and elicits these insights…

❏ The godfather of postmodernism, architect Charles Jencks, dates the end of modernism and hence birth of postmodernism to the blowing up of Pruitt-Igoe, a housing estate in Missouri from the 1950s, based on Le Corbusier’s work. It was demolished on March 16, 1972 — “at 3.32pm, a fact repeated so often it became a social truth”.

❏ The ceramicist Carol McNicoll admits she realised as a student in 1985 that suddenly “decoration was fine and people liked it — no more bentwood — lots of silly plastic”.

❏ Co-curator Glenn Adamson says: “Postmodernism culminates in the act of performance. It’s is all about adopting a pose: you wouldn’t have Lady Gaga without Grace Jones.”

“It’s Po-Mo … postmodern … all right, weird for the sake of weird” — The Simpsons

+++
➢ “The Consensus of Stasis: Rationalism and Sontagist camp”
— one of five million meaningless essays randomly generated since 2000 by the Postmodernism Generator