Webb’s ICA launch: the author declaims the introduction from his book. For the sake of completion: Jacket, Margaret Howell. Trousers, sale rail, £3, Shoes, model’s own 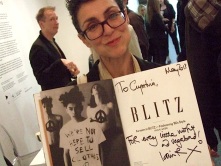 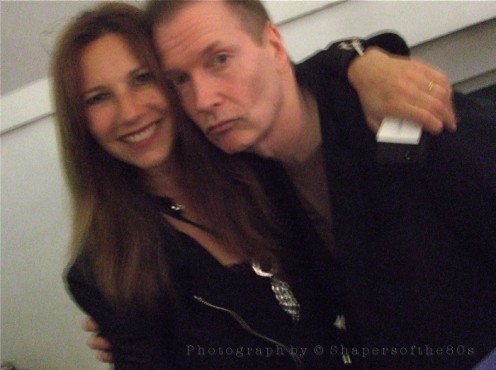 Webb’s ICA launch: Blitz magazine publisher Carey Labovitch with her fashion editor
+++
❚ LAST NIGHT DIEHARD 80s FASHIONISTAS celebrated the launch of an elegant hardback with far greater ambitions than most coffee-table photobooks. It’s a glorious personal CV posing as one man’s record of five energetic years. It doesn’t quite knock the sensationalist Casanova off his perch as the master memoirist, but Iain R Webb’s chutzpah certainly takes your breath away.

As Seen in BLITZ, Fashioning ’80s Style is among the most unabashed, single-minded, focused works of diarism you are likely to have read. In capturing his output as a fashion journalist, this book aspires to present social history expressed through fashion. He brings a new twist to the well-tried technique of oral history, because the 100+ collaborators who contribute to this book are constantly telling the author how marvellous he is, but in the second-person singular. They are talking to “you”, meaning “me”, the author whose name appears on the cover, Iain R Webb.

Its 272 pages record a series of testimonials: “You pulled so many creative people round you” … “We did it because you asked us to” … “You jump-started my career as a photographer” … “You were one of our earliest supporters” … “You had different ways of shooting things” … “You were doing the opposite of high fashion and glamour” … “You showed me a life that was different” … “You were so beautiful and excitingly aloof” … “I would have done anything you asked” … “You were the person who ––”.

There is no place in Webb’s memoir for Eng Lit’s Unreliable Narrator, or for self-doubt or inner struggle. His worldview is confirmed at every turn. Assertion is all: The 80s – we did it my way. We, the readers, are soon rocking on our heels at the sheer brass-necked cheek of it all!

We’ve heard enough about George O’Dowd’s tawdry version of events. Finally we have a much-needed corrective view of the youth cultural revolution that fired up the Swinging 80s. As Seen in BLITZ celebrates Webb’s own unique take on the decade of egotism through the pages he produced. We hear the voices of his co-stars – the photographers, designers, models and stylists who supported him as a lynchpin fashion editor – all dissecting the nuances of their subversive visions.

The whole momentum of post-punk street style during the decade’s dawn, 1980-83, is what drew the eyes of the world’s fashion industries back to Britain and put London Fashion Week on the agenda of every serious commentator twice a year.

While studying fashion design at St Martin’s, Webb was at the centre of London’s nightlife crowd at the now-legendary club called the Blitz – very much one of the 20 key Blitz Kids, as the media tagged them. He rightly claims: “At the dawn of a hedonistic club scene that saw the birth of the New Romantics … on the pages of Blitz, The Face and i-D, a new breed of young iconoclasts hoped to inspire revolution.” These were three new magazines, soon dubbed “style bibles”, which gave journalistic expression to the fertile innovations in UK pop culture and defined the era.

Blitz was a desultory magazine, almost entirely devoid of character in its early years. It was launched in 1980 with a title that its owner says seemed “catchy”, utterly oblivious to the pivotal club-night of the same name and the precocious youth-quake putting London back at the centre of the pop universe. It took until about 1983 for Webb to recognise the gap in the market for radical and purposeful fashion journalism and to infiltrate Blitz, the magazine.

Webb’s ICA launch: the author sets the style for the evening. After Godot, out of skip? I stand corrected: After Wild Boys, out of Burroughs

Webb beavered his way up to becoming its fashion editor from Feb 1985 to August 1987 and was often given 20 pages a month to be filled with his “singular vision if they were to be taken seriously”. Webb’s USP was an “ongoing love/hate relationship with the fashion industry. It was not about selling a look, it was about saying something”. He expressed his ethos on a T-shirt in a 1986 photo shoot: “We’re Not Here to Sell Clothes”. When he was headhunted to join the London Evening Standard in 1987, his shoes at Blitz were filled by Kim Bowen, Queen Bee of the Blitz Kids, herself the wildest child in the club.

Webb’s purpose, he writes, “has always been to inspire or provoke, engage or enrage” and his images “manipulated fashion to explore ideas of transformation, beauty, glamour and sex”. His book brims with attitude and evidence that the fashion world did indeed tilt slightly on its axis during the 80s – as eye-witness accounts confirm in entertaining archive interviews.

How does an author cap all this? At his launch party last night at the Institute of Contemporary Arts, the savviest fashion editor of his day sported an awkward grey suit, and a battered pair of lucky suede shoes, every inch Beckett’s absurd tramps waiting for Godot, looking to all the world as if he’d spent the night in a skip. Anti-fashion to a T. Who’d have thought Webb had once held plumb posts at Harpers & Queen, The Times and Elle? And won the Fashion Journalist of The Year Award in both 1995 and 1996. And remains Professor of Fashion at the RCA and Central Saint Martins!

❚ THIS BEAUTIFUL PHOTOBOOK, As Seen in BLITZ, precipitates a weekend of events at London’s ICA. Today there is a pop-up show in the ICA Theatre curated by the author Iain R Webb to display his own highly confessional memorabilia, plus a series of talks with special guests, film screenings.

In the darkened theatre only the 80s ephemera are visible as you enter: an array of toplit boxes on tables, containing notebooks, diary pages, sketches and name-droppy correspondence. These relics of a career lie in plain wooden showcases – “vitrines” would be an overstatement – more like pauper’s coffins. They amount to a novel kind of runway show of “my creations”. On one sheet of paper, Webb outlines his vision as fashion editor of Blitz, explaining London’s appeal: “The young English inherit a fight-back spirit, whilst the old fall sleepily into a heritage of traditional and quality goods … Of late the two have begun to merge, and the results have ensured the envy of the rest of the world.” Another note identifies the icing on a girl’s wardrobe as “an abundance of dishevelled accessorising – 1985 is a time to be ALIVE”.

“ The Blitz designer collection of Levis denim jackets celebrates some of the most talented and creative designers working out of London in 1986 and it has been 27 years since London’s V&A museum last displayed them. These unique jackets were commissioned by the 80s style magazine Blitz in 1986 and customised by a host of top designers, including John Galliano, Vivienne Westwood, Bernstock Speirs and Paul Smith. In quirky twists on the classic Levis denim number, the 21 jackets, of which the V&A owns nine, push the boundaries of the term ‘customisation’. Onetime Blitz Kid Stephen Linard experimented by attaching a leather backpack and cutlery to his… 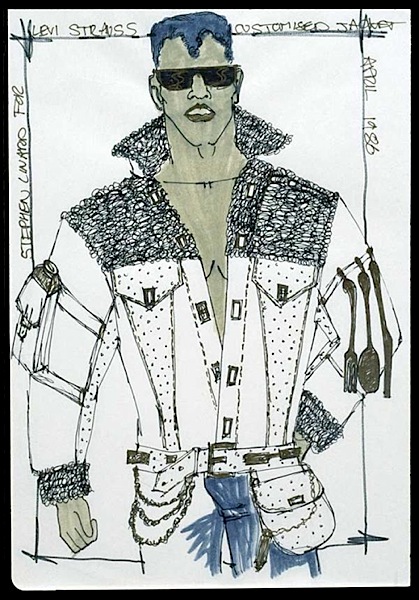 Seven of the nine jackets in the V&A’s collection will be on display in the summer exhibition Club to Catwalk, London Fashion in the 1980s (opening July 10), in addition to a loan of Zandra Rhodes’s jacket, which has been recently reunited with the group, and a Stephen Jones hat that was customised as part of the same project. The jackets will be displayed alongside many of their original sketches and a video wall which will show footage of the 1986 fashion gala… ” / Continued online 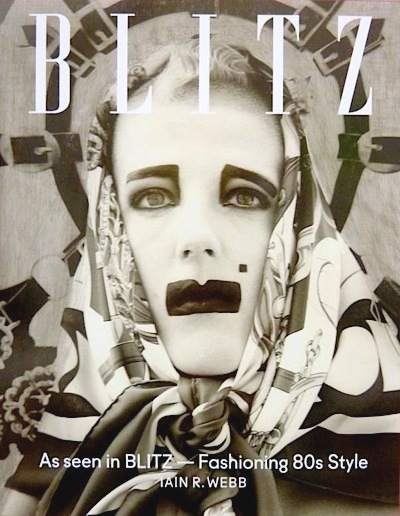 80s club host Scarlett Cannon wears Hermes on the cover of Iain R Webb’s new book: “One of the things I love most about this photograph is that David just drew around Scarlett and darkened the background with a pencil to make her stand out more.” (Photograph by David Hiscock. Make-up, William Faulkner)

❚ FINALLY A BOOK ABOUT THE 80s without George O’Dowd’s face on the cover! Here comes the other version of the Swinging London of 30 years ago, created by the fashionistas, rather than the music entrepreneurs, and the face of Cha-Cha club host Scarlett on the cover defines another version of events exactly. It comes just in time to chime with the V&A’s second landmark exhibition this year. From July 10, following the Bowie extravaganza, comes Club to Catwalk: London Fashion in the 1980s, which includes a display of denim jackets commissioned in 1986 by Blitz magazine from key London-based designers. Who better to sort the Who’s from the Who Nots than one of the seminal clubland Blitz Kids, Iain R Webb.

During those fertile years in the re-energising of the capital’s youth culture through nightlife, when he shared a flat with fellow St Martin’s design students Fiona Dealey and Stephen Jones, Webb says his peers were “cultured clubbers – our aim was to push the parameters and explore the ideals of glamour, imagery, sexuality and taste. We were determined to challenge the status quo and maybe even change the world, even if ‘just for one day’.”

Webb: from Blitz Club to The Times

Having studied fashion at St Martin’s, Webb says he “fell into writing” and went on to become fashion editor of Blitz magazine, the Evening Standard, Harpers & Queen, The Times and Elle.

This week his new book, As Seen In Blitz: Fashioning 80s Style, went off to the printers, to be published in April by ACC (272 pages, £27.30 pre-order price). With previously-unseen archive content and much oral history from key designers, it chronicles the fashion pages Webb created for Blitz magazine 1982–87, after the New Romantics fad had died the death. Webb’s subversive images gave free rein to the imagination and involved a global cast of designers including Comme Des Garcons, Jasper Conran, John Galliano, Jean Paul Gaultier, Katharine Hamnett, Hermes, Pam Hogg, Marc Jacobs.

Webb says: “The book has over 100 contributors – designers and photographers from the Bodymappers to Nick Knight, and loads of models, make-up and hair peoploids in between.”

At its launch in 1980, Blitz magazine posed little threat to the fondly remembered Face magazine, which majored on music and style. Blitz wandered a disparate social world of its own well to the west of the Soho trendsetters – but eventually, under the influence of Webb, photographer Knight and other cool arbiters of taste, it gradually clicked into the Swinging London groove that saw the UK capital become a crucial stopover for the world’s media and buyers during the biannual round of international fashion shows.

Webb himself went on to win the Fashion Journalist of The Year Award in 1995 and 1996. Today he consults for the Fashion Museum in Bath and is a visiting professor at Central Saint Martins, LCF and the RCA.