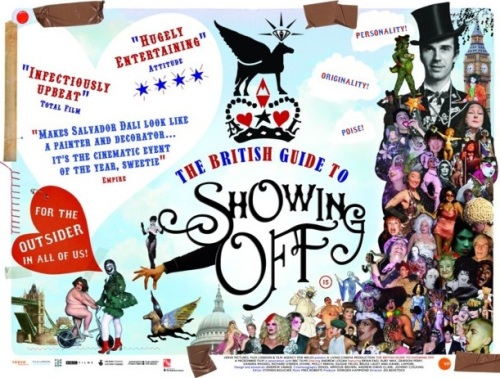 “As a cherishable example of alternative British culture,
it makes you wonder why this isn’t the orthodoxy”
— Nigel Andrews, Financial Times

❚ ANDREW LOGAN. BRITISH ARTIST. SOCIAL MAGICIAN. Here is one of the giants of the subcultural landscape during the 70s who helped shape the imaginations of the Blitz Kids of the 80s. In 1972, Logan created the anarchic and outrageous Alternative Miss World Show, a spectacular costume pageant and fancy dress party for grown-ups, which has been reborn in 12 incarnations over the years.   In a new film, The British Guide to Showing Off, director Jes Benstock takes us under Logan’s glittering wing to share this joyous and exotic subcultural event.   Raucous, liberating and sexually charged, The British Guide to Showing Off “speaks to the outsider in all of us”, they say. At the ICA cinema from today.

➢ Former Blitz Kid now international deejay Princess Julia introduces us to the world of Logan at i-D online:
“ Andrew’s eclectic crowd has consisted of musicians such as Brian Eno and Divine and Nick Rhodes, designer Zandra Rhodes who has designed all of Andrew’s she-male stage costumes, fellow artists Duggie Fields, Derek Jarman, Grayson Perry and even David Hockney… a cast which includes models, scene stealers and individualists that have made London so vital from the days of glam-rock to the very present… ”

➢ Click for screenings… at the ICA London Nov 11–24, and afterwards at 60 independent cinemas around the UK

➢ Nov 27: Andrew Logan talks to Jarvis Cocker on 6Music about his new film The British Guide to Showing Off (within the first hour)

➢ Nov 13 update: The 10 best show-offs — in the Observer Andrew Logan, founder of The Alternative Miss World, pays homage to the outrageous, outlandish and out of this world

Two of Logan's choice show-offs: clubhost Daniel Lismore (pic from Rex) and the Binnie Sisters, aka the Neo-Naturists