➤ Crazee or crazed? Lynch’s view of Duran from within his hellish cave

Duran live on YouTube: a choice of three camera streams and “Lynchian effects” smothering John Taylor’s performance on All You Need Is Now

What’s with the floating heads? Kelis joins Le Bon for The Man who Stole a Leopard

❚ WHAT RUM NIGHTMARES DAVID LYNCH must have in bed at night, but then, he did direct Eraserhead after all. For the best part of two hours, today’s much vaunted Duran Duran live web concert in the Unstaged series kept making you want to hurl virtual cabbages at the screen, enraged by a director whose intent was to obscure the act from view with his relentlessly potty toy-box full of widgets. From 2am UK time till almost the dawn chorus, the band onstage in California had no idea what web audiences in 22 overseas territories (432,000 channel views by 6.30am) were enduring as they pushed on through 18 numbers where musically there was much to enjoy (though Simon Le Bon did lurch badly off-key a couple of times). Two of the guest performers Kelis and Beth Ditto added real pleasure to Duran’s output old and new, as did a medley of Bond themes arranged by Mark Ronson.

The YouTube HD media player offered viewers at their computers a choice of three image sources, but gallingly the director’s cut wasn’t simply an option — it was the main stream. A couple of handheld “fun” cams in the audience searching for alternative shots added nothing whatsoever (one vanished entirely), so you were stuck with Lynch’s hellish visions and flickering ghosts from within his own mental Plato’s cave. 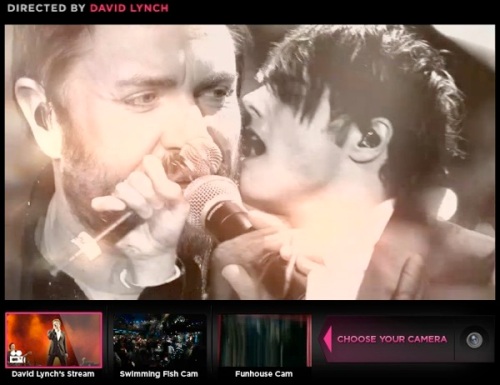 The trouble with the way-over-the-top “Lynchian effects” was that by shooting the band in broodily gloomy black and white, then adding a light-storm of flashing bleached-out effects resulted in obscuring the musicians for literally 90% of the concert. This utterly defeats the founding principle for televising live events — which was always to give the viewer a privileged close-up vantage point. Not to superimpose a veil of tears. What Lynch added to the often rousing performance in the Mayan theatre, Los Angeles, was a heavy-handed montage (loosely echoing Duran’s lyrics) of old clock parts, bicycle wheels, smoking twigs, flames, sparklers, crashing airplanes, shrunken heads on sticks, BBQ hot dogs, dancing mice, gnomes and the sock fairy.

All of which prompted scrolling comments onscreen from viewers: “I wanna see the boys”, “What’s with the floating heads?”, “This guy is on freaking crack”, “Fatuous visuals”, “Giving me a headache”, “I’m going dizzy” and “Fire Lynch!”

Conclusion: arm yourself with a couple of extra-strong Nurofen Plus if you feel up to catching either the whole concert restreamed for UK audiences at 8pm tonight on Duran’s Vevo channel at YouTube, or opt right away for what look like edited highlights which were already being uploaded as the live show ended. The highlights seem likely to linger online for the next month. But if Rhodes, Le Bon, and the Taylors can brace themselves to view the whole Lynchian farrago in real time — as we had to — they’ll never, ever repeat this kind of laughable venture live. The surrealists played this card in 1930, and won hands down. 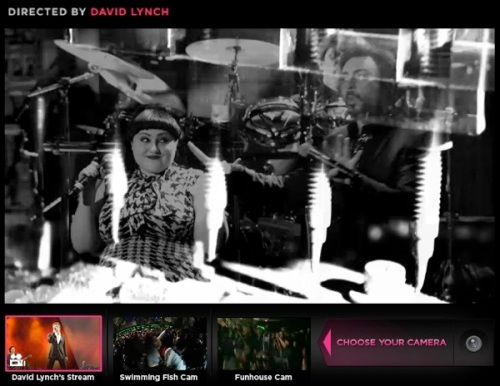 Ghost in the machine: the usually high-visibility guest Beth Ditto trapped in a Lynchian spinning jenny during Notorious 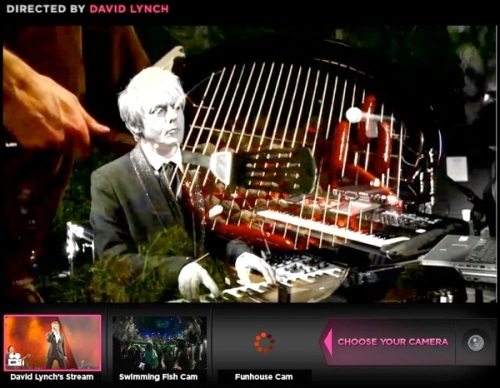 Given a roasting: Nick Rhodes gets barbecued during, appropriately, Come Undone

❚ TONIGHT WEDNESDAY MARCH 23 audiences around the world can tune into Duran Duran’s live online concert in 1080p HD, enhanced by film-maker David Lynch in Los Angeles. It is being streamed live on Wednesday at 7pm Pacific Daylight Time / 10pm Eastern Daylight Time (UTC−04), which is Thursday 2am in the UK (02:00 UTC).

View at the band’s YouTube channel /DuranDuranVEVO where, if you miss the live broadcast, the YouTube blog says you can catch highlights on their channel immediately following the event. The full 90-minute show will also be repeated for UK audiences at 8pm Thursday, according to the sponsor Amex’s Facebook page.

This webcast launches the second season of Unstaged, a music series sponsored by American Express in partnership with Vevo. Guitarist John Taylor said: “It’s not going to look like any concert film has looked before.” He said that viewers will be able to switch between the high-definition main stream and alternate “Lynchian” artistic viewpoints. Lynch insists that he won’t be directing the band themselves, but creating abstract visuals in what he describes as an “experiment”, one where he hopes there will be “many happy accidents”.