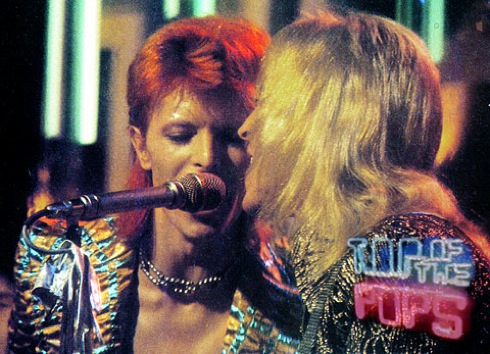 ❚ HOT NEWS OF A CHRISTMAS TREAT for Bowie fans. They have waited for almost 40 years to see his only Top of the Pops performance of The Jean Genie with The Spiders from Mars in January 1973 — shirtless, though clad in an open satin jacket. The tape was long thought to have been wiped or lost.

However a former BBC cameraman recently discovered that he possessed the only broadcast-quality copy in pristine condition, and today Bowie Wonderworld announced that entertainment boss Mark Cooper has arranged to have it included in this Wednesday’s 90-minute collection of classic Christmas hits (TOTP2, 7.30pm). The intention had been to unveil the clip in the BBC4 documentary Tales of Television Centre in the New Year, but enthusiastic fans persuaded him to bring forward its screening, even though you won’t see the track listed in the online billings.

As executive producer of Top Of The Pops 2, Cooper said: “I can’t imagine what other piece of TOTP from the early 70s would be as extraordinary a find.”

Bowie’s performance of The Jean Genie was recorded on Jan 3, 1973 and transmitted the following day for the first and only time. The “lost” recording — copy on 2-inch broadcast videotape — was screened last week at the NFT’s Missing Believed Wiped event. BowieNet’s news editor enthused: “A shirtless David looks amazing as he shakes maracas and blows on the harmonica. It’s clear David and the Spiders were at their peak when this video footage was shot, just a few days before David’s 26th birthday.”

Andy Barding, another privileged witness, added: “The first screening of the newly rediscovered clip of Bowie, Ronson, Woodmansey and Bolder performing The Jean Genie on Top of the Pops saw a packed National Film Theatre struck agog at the majesty of Ziggy in action: in pristine, full-colour TV quality. David, with deep-red hair, shaved brows and bafflingly wide trousers, looked every inch the epitome of what we recall as glam.” 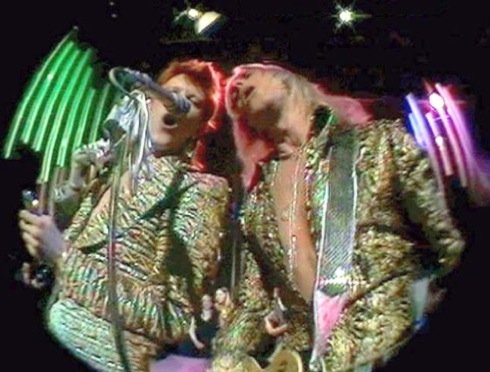 The Jean Genie single had been released in November 1972, and the January 4 transmission on the BBC’s flagship pop show boosted it to peak at Number 2 in the UK singles chart. The track was remixed for Bowie’s sixth album Aladdin Sane in April 1973 which divided critics over his genius. The Jean Genie surfed in on the inspirational wave caused by the arrival of Ziggy Stardust and the Starman in July 1972, when Bowie’s Top of the Pops appearance years later passed into legend as the glam-rock moment that shaped the imaginations of a teen generation who were to become the popstars of the 80s.

❏ The retired cameraman John Henshall, now 69, has been speaking of how he came to own the footage of David Bowie’s Jean Genie which was thought to be lost. In the early 70s, long before the days of digital effects, Henshall ran a company called Telefex which made star filters, multi-image prisms, fish-eye lens attachments, kaleidotubes and picture rotators. Encouraged by TOTP producer Johnnie Stewart, he used the fish-eye to create the optical effects seen in the Bowie recording. 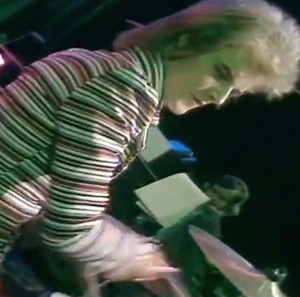 Afterwards he asked Stewart for a personal copy on 2-inch tape to include in his company’s showreel.

Today he is an expert in digital imaging, who pioneered the now ubiquitous lightweight television camera mounted on a long boom arm that we see sweeping above artist and audience at concerts. He also directed photography on hundreds of early music videos for artists including Paul McCartney, Kate Bush, Blondie and Elton John.

Henshall only discovered how “rarer than rare” the clip was when he mentioned it in a radio interview. He said: “I couldn’t believe that I was the only one with it. I thought you wouldn’t be mad enough to wipe a tape like that. They’d been looking for it for years.”

➢ Update Dec 21: Finally, the BBC Six o’Clock News gets round to its own report on John Henshall’s prize discovery