Spandau Ballet in 2009: answering our questions at their reunion press conference

❚ EVEN AS A UNIQUE CD COMPILATION of Spandau Ballet’s landmark hits is set for massive free distribution with The Mail on Sunday next weekend, Duran Duran announce a global concert live online at YouTube only days later, along with their own album release on CD. It could be the 80s all over again when the two arch-rival bands vied for the title of leaders of Britain’s New Romantics movement. So which veteran band will score the bigger hit in 2011?

Spandau’s special-edition CD features 12 tracks — half, including True and Gold, are remastered from their originals, with six live tracks coming from their show at London’s Sadler’s Wells in 1983, including the club anthem Chant No 1. The cover-mounted disc will be delivered free across Britain with every copy of the MoS, presumably because its marketing director expects Spandau to boost the paper’s circulation well past its average of 1,924,589 copies. Last Sunday Gary Kemp recalled the 80s for MoS readers: “It was madly competitive as we were all tribal. Duran Duran wanted to be more successful than us, we wanted to be more successful than ABC, or Culture Club, or Duran themselves. We spurred each other on.” 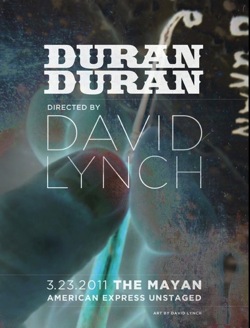 Meanwhile today, Duran Duran announce that David Lynch — fabled director of the movies Eraserhead and The Elephant Man — has been enlisted to direct a live DD concert to be streamed online on March 23/24 to launch the second season of Unstaged, a music series sponsored by American Express and Vevo. Amex has pushed this internet venture to team breakthrough artists with influential filmmakers using interactive social media as the outlet (full details at Billboard).

During a Facebook Live chat from SXSW John Taylor admitted that how Lynch intended to video the show was still a mystery but “we know it’s not going to look like any concert film has looked before”. Audiences around the world will be able to switch between the director’s high-definition main stream and alternate “Lynchian” artistic viewpoints when they tune into YouTube on Wednesday in the US at 10pm EDT / 7pm PDT — which is Thursday at 02:00 UTC. The concert will also be rebroadcast for the UK on YouTube at 7pm on March 24. (Check here for regions where Unstaged will be viewable live. The Los Angeles concert will then remain online for a month.)

Can Duran attract a bigger audience than Spandau’s 2million Mail readers? With their US tour starting this week, DD’s comeback album is released in the US as a physical disc next Tuesday. The video of its title track All You Need Is Now has scored 629,689 views since it was posted on YouTube on Dec 20, so it’s anybody’s guess how many fans will tune in for the live webcast. What’s yours?

WHAT THE RIVAL BANDS SAY

Talking up the imminent free CD, Spandau Ballet told last week’s Mail on Sunday what the tracks meant to them…

Martin Kemp “We gave Instinction to producer Trevor Horn who really turned it on its head. It became a monster.”

Steve Norman on Lifeline “We knew we couldn’t stay an underground band for ever – the mainstream pop charts beckoned and we knew we had to deliver. Cue smiles and kisses to camera!”

John Keeble “Only When You Leave was the lead single from the Parade album as the band established a more rock-based edge. It opened doors to a new group of fans and gave me the chance to rock a bit harder on the drum kit.”

Tony Hadley “Sadler’s Wells was one of the best venues for us. It was an intimate gig and perfect to showcase tracks from our album True, such as Foundation – a slice of white soul-boy funky pop – Communication – a great upbeat number – and Pleasure, which really captures the essence of the era.”

Nick Rhodes: last November's video for the comeback single, All You Need Is Now. Courtesy duranduran.com

Over in the States, Duran founder and keyboardist Nick Rhodes discusses the David Lynch webcast with Billboard today:

“The stranger it is, the more beautiful it will be. What appeals to us very much about working with David is that we like the way he thinks about things and how he’s always gone out on a limb to make things different. He works completely outside of the system, and that’s what we try to do. I think the combustion between us and David should create something that nobody’s ever seen before, something mysterious and magical and surprising.”