1969: “This is Ground Control to Major Tom / You’ve really made the grade / And the papers want to know whose shirts you wear”

➢ Today’s issue of The Economist pulls out the plum – a superb obituary casting David Bowie as a wonderful epitome of alienation who saw a way through the world’s fears of imminent annihilation:

“ IN JULY 1969 men walked on the moon, a technological leap all but unthinkable 50 years before. Three years later they abandoned it, and have renounced all return ever since. What boosters saw as the great opening act of the space age turned out to be, in effect, its culmination. Within a few years presidential corruption, economic stagnation, military ignominy and imagined catastrophe had warped post-war America’s previously impervious belief in progress, a belief that had resonance across the then free world. After Apollo, the future would never again be what it used to be.

David Bowie’s greatest years began nine days before Apollo 11 touched down in the Sea of Tranquillity, with the release of his single Space Oddity; they ended 11 years later, with the single Ashes to Ashes. Over that decade he used imagined futures to turn himself into something contradictory and wonderful — an epitome of alienation with whom the alienated flocked to identify. In doing so, he laid bare one of the key cultural shifts of the 1970s: the giving up of past dreams. . . ” / Continued online

“In Space Oddity Major Tom, floating in a most peculiar way, had been an isolated spaceman;
by Ashes to Ashes his isolation was a junkie’s”
– The Economist 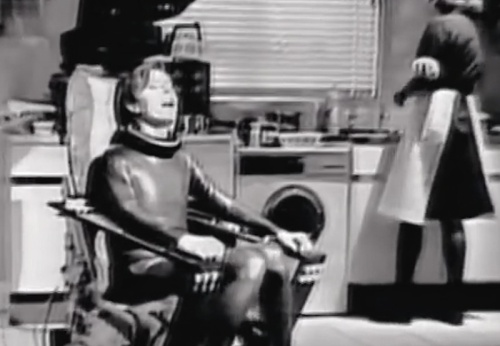 ➢ Previously at Shapersofthe80s: “I’m not a rock star” Bowie often said – No, David, you were a messiah

OVER TO YOU, MAJOR TIM: 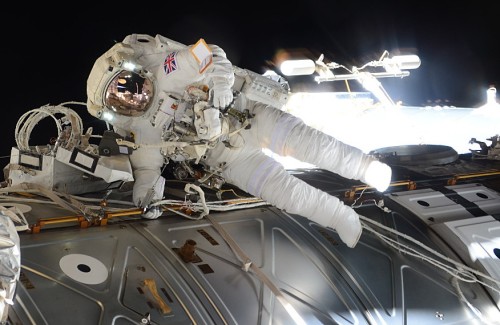 2016: The British astronaut Major Tim Peake – sporting the Union Jack on his shoulder – takes his first spacewalk at 2pm today from the International Space Station (via NASA Television)

❏ This is the cover version Bowie called “possibly the most poignant version of the song ever created”, recorded by Commander Chris Hadfield on board the International Space Station in 2013.

Bowie: “He collapsed” at his last public appearance

David Bowie’s last appearance in public, attending the premiere of his musical Lazarus in New York on Dec 7… Its director Ivo van Hove has told The Times: “I could see the tears behind his eyes because he was not a man to show off his emotions. He was really deep in fear.” Photo © Vantagenews

➢ Bowie obituary at The Guardian: “The world is never short of self-absorbed would-be artists, but Bowie was able to break out and become the first misfit megastar. That undoubtedly had a good deal to do with talent.”

➢ At Facebook, the legendary UK soul deejay Robbie Vincent writes: “ We have lost a real Soul Brother in Bobby Womack, one of the greatest. We go back a long time and he used to call me Old School Robbie. Respect to an amazing and talented musician and a real gentleman. At this time I wish I was on air to pay tribute… Delighted to say you can hear again my last interview with Bobby Womack at Mixcloud. Thanks to Mike Vitti for his help in making it possible for you to share words and music from our Soul Brother. He was in fine form too. ”

➢ When Robbie met Bobby… Robbie Vincent’s Essential Rhythms interview with the legendary Bobby Womack on Jazz FM in January 2013, in three parts – James Brown, hiding from the tax man, pretending to be blind, Sam Cooke, Wilson Picket, great music, this thing has got the lot.

➢ Soul legend Bobby Womack dead at 70 – Rolling Stone obituary: “ Womack was inducted into the Rock and Roll Hall of Fame in 2009. ‘My very first thought was — I wish I could call Sam Cooke and share this moment with him,’ Womack said. ‘This is just about as exciting to me as being able to see Barack Obama become the first black President of the United States of America. ”