➤ Robbie Vincent: 35 years as master of hot cuts and getting our “rhythm buds” going

♫ Before you read on, click here for the perfect soundtrack from Robbie’s Radio London shows three decades ago: Friends & Strangers, recorded by saxophonist Ronnie Laws for the album Mountain Dance on Blue Note, 1977

◼ TUNE IN ONLINE AT 10AM TODAY and “If it moves, funk it”. Wherever you are in the world, your internet connection will deliver one of Britain’s great musical tastemakers who 35 years ago had teenagers expressing their musical allegiances in fanatical yet playful rival groups known as soul tribes who adopted saucy names such as the Dartford Tunnel Moles, Medway Maggots, Sherwood Softshoe Shufflers, Welwyn Wobblers and scores more. More important, in an age of casual racism, this white radio and club deejay opened their ears and hearts to the rhythms of black music which they couldn’t hear anywhere else — certainly not in the pop charts and precious few places on the radio dial.

In Britain, your skin colour wasn’t necessarily reflected in your musical tastes but if you danced with your hips, your feet and your soul, black music definitely became the rallying point for frustrated dancers unable to find release in dancehalls of the Saturday-night meat market tradition. The soul tribes of Britain saw white and black kids gathering together in underground clubs discovered only through the grapevine, and often unlicensed for alcohol. Then came marathon all-day soul festivals — the first Purley all-dayer in 1978 springs to mind, with music amplified through the UK’s first serious sound system designed by soul disc jockey Froggy, and a mixing console to provide seamless cross-fades. On dancefloors across the land, the acrobatic tribes competed to improvise the wildest dance moves and to build the highest human pyramids. None of this could have been imagined in America, with its strict apartheid between black and white music, and limited chances even for Motown artists to cross over into mainstream charts and playlists.

1978: Chris Hill entertains dancers from across the south-east during the first all-day soul event at Tiffany’s in Purley, the London suburb

Vincent was one of three deejays who soon headed what became known as the Soul Mafia working in London and the south-east and bringing real pressure to bear on record companies to release quality US acts in the UK. His counterpart at the commercial Capital Radio station was black deejay Greg Edwards, Grenada-born and New York-raised. He won his own cult following with his Saturday evening Soul Spectrum and its romantic “Bathroom call”.

At about the same time that Vincent had a residency at the spanking new Flick’s disco in Dartford, Kent (south of the Thames), Chris Hill was already a legend as resident deejay at the Gold Mine on Canvey Island (north of the Thames). If anywhere in the mid-70s, this was where novelty dressing up began, influenced by several MGM compilation musicals in the cinema (That’s Entertainment!, 1974) and blockbusters such as The Great Gatsby (1974) rekindling nostalgia for vintage Hollywood fashion. For a while, and encouraged by Hill, the Gold Mine had the monopoly on GI uniforms and scarlet-lipped jive-dolls during its Glenn Miller and swing revival.

As a club deejay Vincent was the least theatrical in his presentation. Yet, as an ex-Evening Standard journalist and “devil’s advocate” phone-in veteran, his consummate broadcast interviews with American soul giants (James Brown, Marvin Gaye, Sly Stone, Bobby Womack, Chaka Khan, Luther Vandross, Teddy Pendergrass, Herbie Hancock, Roy Ayers) not only educated a generation of teen clubbers but reinforced the credibility of the music at the very moment when a hitherto cathartic disco scene turned to dross. The destructive effect of the dire film Saturday Night Fever and its musically inane Bee Gee soundtrack cannot be overstated as its infection swept the globe in 1978. 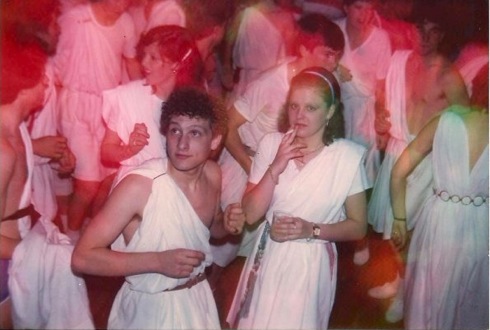 Dressing up for the dancefloor: toga parties were popular on the soul circuit, here in 1979 at Papillon club, Brighton. (Photograph by Paul Clark)

One consequence for the UK was that the emergent soul scene dived back underground and partially reemerged only in 1980 with the New Romantics, disguised in a sharp new wardrobe. There were mutations within the family, but most danced to music with soul and many new young bands had funky beats and jazz pretensions. Mainstream jazz itself came back into favour with young clubbers in the early 80s when the black Brits Courtney Pine and Sade Adu were among the first to make good. All the emergent subcults lived to dance, and dressed up to do so as the 80s matured, while the whole flavour of UK music shifted away from rock guitar to the more upfront dance beats led by the bass guitar and bass drum.

This lineage does get overlooked these days: a substantial generation of 70s music lovers acquired taste, style and feet that knew how to move. This was precisely the audience-in-waiting who demanded and created vibrant world-beating pop and fashion as Swinging London was reinvented in the 80s. Only with the so-called Second Summer of Love in 1988 and the ecstasy-fuelled hurricane of aceed house that swept in from Ibiza did UK youth almost overnight abandon a long history of dancing with its feet. The trance-inducing techno beats of rave music proved so alien to the soul heritage that kids chose instead to wave their hands in the air as if to commune mystically with the lazer light.

Ever since, only their elders can remember how to cut a dash on a sprung-maple dancefloor. Those include the cool soulboys and girls of the early 80s who favoured the funky post-Blitz London clubs such as Le Beat Route, the Wag and Dirtbox. And they express fond gratitude to Vincent, Edwards and Hill as their musical mentors.

◼ REFLECTING THIS WEEK on the heady rise of the soul movement in Britain, Robbie Vincent identified some of the reasons: “The whole thing grew because as the years went by we had more and more access to a core group of really important American black artists. In the UK, Loose Ends and Soul II Soul are fine examples of bringing not just great home-grown R&B to our ears but style and fashion too.

“Popular black music writing royalty like Kenny Gamble, co-founder of the mighty Philadelphia International Records label, says his favourite cover version of one of his tracks is Now That We Found Love by Third World. It is real credit to UK dancefloors that the track was adopted almost as an anthem. But it needed that pool of musicians like The O’Jays and jazz crossover men like Donald Byrd and Grover Washington to influence and excite those new young kids on the block.”

Robbie Vincent himself deserves credit as an enthusiast with missionary zeal. From the 1978 launch of the then Labour-leaning tabloid, the Daily Star, he wrote an influential weekly column recognising the inventive camaraderie of Britain’s soul tribes, long before other media woke up to the phenomenon. For most of the 80s Vincent’s career saw him curating soul in regular strands at Radio 1, the BBC’s nationwide flagship, then at key music stations ever since. In 1995 he was voted Independent Radio personality of the year at the annual Variety Club awards. In 1997 he contributed profiles to The Sunday Times’s partwork the 1,000 Makers of Music. Of Berry Gordy’s Motown label during the 60s he wrote: “The Sound of Young America became a way of life, especially for Britain’s Mods: if it wasn’t Motown, it wasn’t hip.” 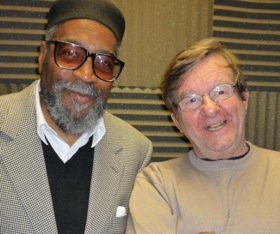 These days, following a spell of ill-health, Vincent is ensconced at JazzFM airing his jazz-funk credentials every Sunday from 10am in a three-hour masterclass. And Christmas Day’s coup is an extensive interview with Kenny Gamble, who founded the Philly label as one half of the independent producing and writing team Gamble and Huff with 170 gold and platinum records to their credit. On air Gamble talks of its stars such as The O’Jays [view vid], Billy Paul, Michael Jackson and Teddy Pendergrass. In the late 60s Atlantic offered G&H one massive act after another — Aretha Franklin, Wilson Pickett, Dusty Springfield, Archie Bell & the Drells. Gamble says: “We did the background singing on I Can’t Stop Dancing. There were no Drells. There was me, Huff and Karl Chambers. I’ve been a Drell, I’ve been a Stylistic, I’ve been a Blue Note and a few other things.”

As a man of taste he declares The Temptations [view vid] the best group ever and Motown the greatest record company ever. When G&H formed Philly Int in 1971, they set up MFSB as the in-house band, a pool of 30 musicians exactly as the Funk Brothers were for Berry Gordy. “Motown was the blueprint for what we did. The Motown sound was so powerful, everybody wanted it. But we wanted our own sound [view vid]”. Here in MFSB’s The Sound of Philadelphia we hear the driving bass, hi-hat rhythms and lush orchestration that defined what came to be called disco in the eternal battle between rock guitars and dancing feet. The JazzFM interview continues on New Year’s Day.

◼ AMONG VINCENT’S FANS TODAY is the young black British mixer-producer Fitzroy Facey, who describes himself as a religious listener to Robbie Vincent’s radio shows through the late 1970s and early 80s. It was 1979 when Robbie helped instigate the National Soul Weekenders at Caister holiday camp, which are still going strong (see video below). In a recent interview for his magazine The Soul Survivors (edited extract at JazzFM), Fitzroy acknowledged that Vincent has been as important as some of the artists he has interviewed because he touched so many people’s lives, to create the “one nation under a groove” [view vid].

Robbie: My phone-in show helped here as I suffered a lot of abuse and would not tolerate racism or bigots. I’m very proud to have stood up to those views and the great uniter is music, which is a universal language.

Fitzroy: I was one of those coming from an Afro-Caribbean background who remember the racist door policies in the 70s and early 80s.

Robbie: Tell me about it; don’t forget I grew up in an era where Tamla Motown didn’t put their artist photographs on the cover sleeves because they were black and they worried they might alienate a white audience. This is an often missed point and an utter disgrace… We should hang our heads in shame.

Fitzroy: There are huge testaments on the net to both you and Greg Edwards for opening doors to pirate stations and presenters of black music. The younger generation have no concept that back in the 70s access to black music was totalling less than 10 hours a week. Today it’s 24/7 and you couldn’t possibly imagine 30-plus years later that Kiss, Jazz, Choice FM would grow out of that.

Robbie: That’s what made the scene so exciting — it was pioneering. The people who danced and were enthusiastic about the music made me very proud to be part of it. Because people were so passionate… Remember, the young black musicians were inspired by their brothers in America. You didn’t have to become a boxer — you learned an instrument. It was so infectious, it was inevitable that the music back then would be integral to popular music today.