2013 ➤ Double whammy from the Spandau boys

❚ BEING REVEALED currently on Facebook, two major Spandau Ballet announcements. First the biography of the band, a superior coffee-table photobook, Spandau the True Story, which records the entire career of the Angel Boys from Islingon, penned by their longtime shadow Paul “Scoop” Simper and published by the prestige celebrity publisher Genesis. It features unseen pictures taken not only by clubland mate Graham “Heroes” Smith, but also by Shapersofthe80s – the team who were there from the start of the New Romantic story.

➢ Spandau the True Story: sign up today at Genesis Publications, “the home of beautiful music books” … Register your interest
without financial commitment

A second announcement tonight heralds the movie Soul Boys of The Western World, a feature-length documentary containing much unseen vintage footage, produced by Grammy Award-winner Scott Millaney who was a founding member of the promo video company MGMM in the 80s just as the British music industry boomed. His company produced over 1,000 pop promos including Video Killed the Radio Star, Vienna, Dancing in the Street and Rio.

“Scoop” Simper, today an executive celebrity writer at The Sun who wrote the film’s treatment, said tonight: “There is wonderful footage of the Spandau mums and dads when they were all still with us. And never-before-seen footage from Los Angeles and Australia when the band were in their pop pomp. All the band have contributed voiceovers.”

Spandau manager Steve Dagger reveals that a case full of early film footage of the band has been discovered recently. This includes offcuts not used in a prominent TV item just before release of the band’s third single Musclebound in March 1981, and aired on the BBC teatime news magazine Nationwide. Just as the phrase New Romantics was coming into wider use by both media and an emerging generation of UK image bands, including Duran Duran, the BBC cameras capture what Dagger calls “priceless cavortings” within Soho’s heaving Beat Route club.

There’s also a whole film sequence in Jon “Mole” Baker’s shop off Carnaby Street, where Spandau members are seen trying on a variety of outfits by the Axiom collective of designers, which were to be shown in a New York runway show two months later, in what became the “First Blitz invasion” of the US, organised by both the band and the former Blitz Kid fashionistas. These Axiom collections received another runway show at Steve Strange’s Club for Heroes in London in the autumn of ’81, by which time the charts were ablaze with new slipstream bands and British street style began to explode. 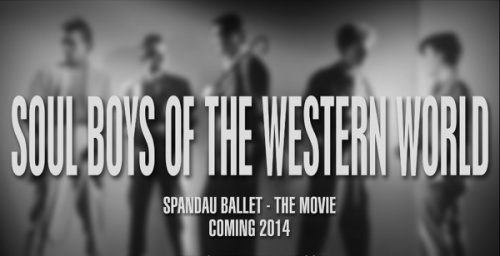 ❏ On tonight’s Jonathan Ross Show Gary and Martin Kemp (pictured below) were talking about their new TV series Gangs of Britain, due to air on the Crime & Investigation Network (Sky 553 and Virgin 237) on Sundays from April 21 at 9pm BST. It’s three years since Spandau Ballet played live together so the killer question is whether they might reunite for another tour? Gary told Ross: “I pretty much guarantee we’ll do it again next year.” Martin added: “I hope so. I’ve never laughed as much as that year [on the Reformation Tour]. Just to have that year of getting your best friends back together was so lovely. I would say it was the best year of my life.”

Another Spandau tour? Martin and Gary Kemp give Jonathan Ross a cautious yes tonight. (Viewable on ITV Player for another month. Screengrab © ITV)

❏ Tomorrow night, if you’re viewing the 1990 British movie The Krays on ITV4 at 9pm BST, Martin and Gary Kemp will be tweeting along with the film. Viewers can take part by using the hashtag #KraysLive while watching the brothers recreating the villainy of the English gangsters Ronald and Reginald Kray who led organised crime in the East End of London during the 1950s and 1960s.
➢ Follow Martin @ Twitter
➢ Follow Gary @ Twitter

❏ New on sale at the Spandau store is a limited edition 20 x 20-inch lithographic print embossed onto the highest quality 270gsm uncoated paper of the True album artwork by Spandau friend David Band, a Scottish artist who also designed sleeves for Altered Images and Aztec Camera and sadly died in Australia in 2011. Reproduced to celebrate Spandau’s 30th anniversary of their No 1 hit, each print is hand-signed (not reproduction signatures) by all members of Spandau Ballet, and hand-numbered by a professional scribe in a run of only 500 prints.