➤ Smash Hits and other mould-breakers of the 80s

❚ ANOTHER NICELY PACKAGED Radio 4 documentary today celebrated the crucial years 1982–85 which Neil Tennant describes as “the golden age of 80s pop”. They luckily coincided with his tenure as a writer on Smash Hits magazine before stepping into the pop charts himself as half of the Pet Shop Boys. Obviously in a prog titled Neil Tennant’s Smash Hits Christmas Tennant and his cronies were full of back-slapping at the moulds they broke with the mass-selling fan mag, driven initially by two selling points – song lyrics and pull-out pinup posters.

Launched in Nov 1978 as a monthly title, Smash Hits trailed “The words to 18 top singles” as its key feature. The mag was the invention of former NME editor (and later founder of The Face) Nick Logan who conceived it on the kitchen table and initially toyed with the title Disco Fever, presumably in homage to that year’s horror movie Saturday Night Fever. He chose the Belgian new-wave joker Plastic Bertrand for the cover of a pilot issue in the post-punk vacuum when any new direction seemed significant, but actually launched with Blondie. Smash Hits soon went fortnightly, ran for 28 years, and died with Celebrity Big Brother’s Preston gracing its last cover in 2006. In his Guardian obituary for the mag, Alexis Petridis wrote: “The period between the rise of Adam and the Ants and the collapse of Stock, Aitken and Waterman’s ‘Hit Factory’ empire may prove to be the last truly great pop era, in that it produced not just great pop music, but great pop stars.”

Tennant ignores the fact that 80s classic pop began with the music of Spandau Ballet and Adam Ant a couple of years earlier than his joining the mag. Also unmentioned in today’s doc was that the mould-breaking writing of this era was actually led by The Face and the subcultural flagship magazine New Sounds New Styles, which gently parodied the posers of the New Romantics movement and closed in 1982 through lack of promotion by its publisher Emap, who also happened to publish Smash Hits. The fresh rebel writers of NSNS had adopted a tongue-in-cheek tone which kickstarted a shift of power away from stars and their publicists into the hands of writers themselves. Once the 80s had revived the long-dead credibility of pop music – dubbed “pure pop” in vigorous public debates – Smash Hits took its cue by adopting a knowing approach to pop journalism and providing a cheeky foil to Britain’s four seriously po-faced weekly rock-music newspapers. We cannot underestimate how its humour helped sophisticate the Smash Hits reader, pragmatically described by Tennant as “the 12-year-old girl in Grantham”. Which was a neat way of deflating his own pomposity.

Spookiest quote today came from Toyah, after remarking that the pop scene has lost the airy optimism of the 80s: “We now view fame as something dark and faintly abusive.” Oo-er. 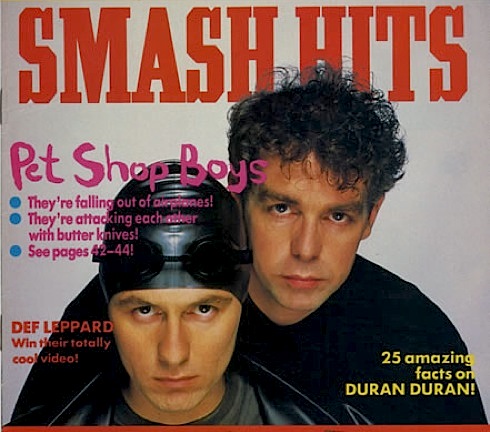