2010 ➤ Is it goodbye or merely au revoir? Spandau’s questions, questions give us no answers 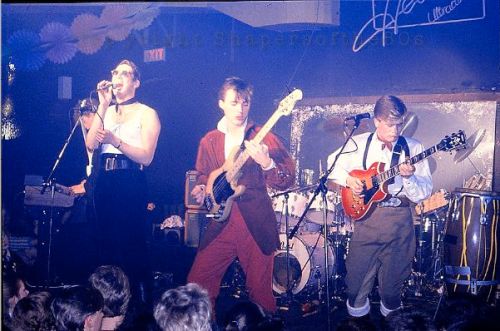 London’s Heaven club, Dec 29, 1980: the tenth of Spandau Ballet’s selected dates, as they were known in those days to avoid the rockist words “gig” and “tour”. Note Gary Kemp, far left, on synth. Photograph © by Shapersofthe80s

❚ TONIGHT AT A SWANK EVENING BASH Spandau Ballet bow out from the Reformation Tour which reunited the five former schoolmates from the Angel, Islington, for one year, one album, one single, one tour, one DVD and umpteen vintage remixes. They headline the second of this year’s Newmarket Nights at the summer racecourse near the Suffolk market town renowned as the birthplace of thoroughbred horse racing.

Tomorrow the mobile knives climb back in the drawer and who knows whether they will ever be sharpened again as a team? Tony Hadley in particular hits the road on July 3 with his own band alongside ABC and Rick Astley. It’s the first of a series of Heart Radio picnic concerts, starting at Borde Hill Garden in Sussex.

Reasons reasons were there from the start, so each member of Spandau returns to his own art. Shapersofthe80s, too, was there from the start, corralling the 22 Blitz Kids who put the show on the road in 1980 for a now-nostalgic team photo at the Waldorf Hotel. Robert Elms even smuggled a copy of my Evening Standard column into the picture in his right hand, sentimentalists as we were at the outset of the big adventure. Blue sing la lune, sing lagoon.

Instead of a traditional retirement clock, here’s a bespoke souvenir of their heyday for the Angel Boys, courtesy of the E4 TV series Skins. It’s a slideshow of Spandau’s biggest No 1 hit True, rendered very poignantly with ukulele backing . . .

One response to “2010 ➤ Is it goodbye or merely au revoir? Spandau’s questions, questions give us no answers”