❚ MAUREEN CLEAVE [left] died this week aged 87. She was a long-time colleague and friend who was refreshing to know and a perfectionist at work. She was the author of this landmark piece of journalism in 1966 in which Beatle John Lennon said ironically: “We’re more popular than Jesus now.” Bang in the middle of the Swinging 60s, at the height of Beatlemania, the most successful pop group in history became possibly the most hated. In America’s Bible Belt, outrage sent fans out to burn The Beatles’ records and radio stations round the world banned their music. The Fab Four never played live concerts again.

Maureen had written the first significant piece about the band in the London Evening Standard in January 1963, headlined “Why The Beatles create all that frenzy”. She acknowledged the Liverpudlian scallywags as fresh young jokers in the Max Miller cheeky-chappie mould. This kick-started her career as probably the most clear-sighted and persistent interviewer of her generation and her 1966 report, “How does a Beatle live?” still makes a riveting read as John Lennon guides her through his 22-room home deep in the Surrey banker-cum-oligarch belt…

➢ Read on at Shapers of the 80s:
1966, More popular than Jesus – Maureen Cleave’s full Lennon interview from the Evening Standard in 1966 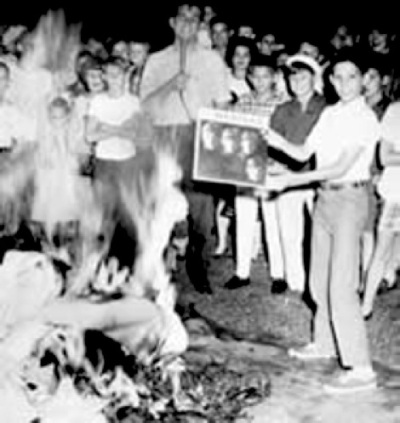 Christian outrage in 1966: public bonfires were organised in Alabama, Texas and Florida to burn The Beatles’ records

➢ If ever a journalist had a quote taken out of context and rehashed evermore, it was Maureen Cleave – The Times obituary, Nov 2021

➢ Once the Beatles had become the most famous entertainers in the world, Cleave witnessed at first hand the destructive force of modern celebrity – Daily Telegraph obituary, Nov 2021

➢ Journalist who was close to the Beatles and known as one of Fleet Street’s most exacting interviewers – Guardian obituary, Nov 2021

Maureen Cleave elaborates on 1965’s interview with Bob Dylan (above), filmed by D A Pennebaker for his documentary Don’t Look Back. The discussion below is extracted from The Bridge, Number 6, Spring 2000 (courtesy of @bob_notes). Click on image to enlarge…

Blogger Stephen McCarthy explored this filmed interview with Bob Dylan in the light of his conversion to Christianity in 1978. We see Maureen Cleave ask Dylan: “Do you ever read the Bible?” because she hears echoes of its ideas in so many Dylan songs. Yet Dylan seemed uneager to follow that line of questioning.

McCarthy writes: “Remember now, this was prior to the recording of songs like Highway 61 Revisited which begins with the lines, “Oh God said to Abraham, ‘Kill me a son’. Abe says, ‘Man, you must be puttin’ me on’” … Granted there were allusions to The Bible in earlier songs, such as Gates of Eden etc, but in my opinion, it was fairly perceptive of Maureen Cleave to have discerned the religious thread that could be found woven into many of Dylan’s earliest songs. And it also begs the question, did she somehow instinctively suspect that times they were a-changin’ for Bob Dylan in some sort of spiritual sense?”

MAUREEN RECALLS JOHN AND PAUL IN 2013