1963 ➤ With The Beatles the day Kennedy was shot

Beatles live onstage in Stockton, Nov 22, 1963: George Harrison at the microphone on the night Kennedy was shot

❚ WHERE? LIVE, ONSTAGE IN STOCKTON-ON-TEES. Count the simple Vox amps behind the band and note how one is perched on a chair! This picture was taken on Friday Nov 22 1963 at the 2,400-seat Globe theatre when the Beatles played the art-deco venue on their first nationwide tour. The band’s half-hour set during twice-nightly performances at 6.15 and 8.30 was supported by seven other acts with tickets priced from 6 shillings to 10s 6d, when a workman’s weekly wage might be £7.

During the first house in Stockton, England, the assassin’s bullets killed John Kennedy in Dallas, USA. At 43 he was the youngest man elected to the US Presidency and during the cold war era as the Soviet Union threatened world peace the hopes of the West rested on his shoulders. In Britain TV programmes were interrupted to break the dramatic news just after 7pm.

In those days we’d seen nothing as electrifying as the Beatles and while their audience at the 18th date on their first serious tour were discovering the power of The Scream, these fans remained respectfully seated throughout the show. Even so, personal accounts say the second house in Stockton was distinctly more subdued. Shocked by the news about JFK, Lynda Richardson, a fan travelling back to Redcar by coach, said: “No one spoke a word all the way home.” 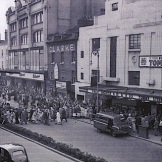 The Globe, Stockton, today: awaiting its £8m restoration
Also on this day the Fab Four’s second album With The Beatles was released on Parlophone eight months after their chart-topping debut LP and it immediately broke sales records. Lennon’s raw vocals barked fresh life and sexual danger into the Motown covers Please Mr Postman, Money and You Really Got a Hold on Me. With its eight original compositions, this was the album that moved William Mann, classical music critic of The Times, to write that Lennon and McCartney were “the outstanding English composers of 1963”. 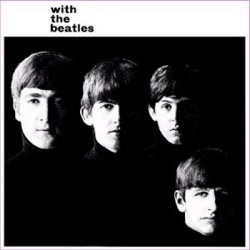 Earlier in the year three Beatles singles had gone to No 2 and to No 1 twice in the UK chart and now another with advance sales of a million copies – I Want To Hold Your Hand – was racing up the chart to become the Christmas No 1.

This November, too, the Daily Mirror coined the word Beatlemania to describe the tour’s first gig, a phenomenon really triggered with the release of the single She Loves You in August. During the tour, The Beatles had also stopped the Royal Variety Performance – playing four numbers and watched by half the nation in a TV show of recorded highlights – when John Lennon famously quipped: “Will those in the cheaper seats clap your hands. The rest of you can just rattle your jewellery.” The group guest-starred on BBC TV’s flagship Morecambe & Wise Christmas Show, while their own Beatles’ Christmas Show was to run at London’s Astoria Finsbury Park for 30 performances (100,000 seats) featuring the Fab Four in comic “skits” with six pop acts in support including Cilla. By this stage the Fabs could go nowhere without a personal police escort. [See, How does a Beatle live? – at Shapersofthe80s]

The Globe, Stockton, 2009: a glorious interior in art deco style

Today the Globe in Stockton, a small market town in County Durham, is a disused shell which is Grade II-listed. Built in 1935, its facade is enlivened with fluted plaster and the interior retains riotously colourful art deco features typical of the period. As a “super-theatre” the Globe hosted opera, ballet and an annual pantomime, together with touring variety, musicals, and pop concerts by Tommy Steele, the Rolling Stones, Searchers, Seekers, Billy J Kramer, Herman’s Hermits, Animals and Swinging Blue Jeans. It closed as a theatre in 1975, eked out the role of bingo hall until 1996 and then closed its doors.

The Theatres Trust describes the Globe as “an excellent example of its kind” and it is one of 68 buildings on its At-risk register. In 2009, Stockton-based Jomast Developments Ltd announced plans to restore the Globe and recruited theatre expert David Wilmore to the task. He called the Globe “a real Sleeping Beauty”. Finally last month Jomast reported that the Heritage Lottery Fund has earmarked £4m towards an £8m project to transform the Globe into a live entertainment venue for music, comedy and other events, with a capacity of 2,500 and the potential to create 64 jobs. The new venue is likely to open in 2016.

❏ View The Beatles on CBS Morning News with Mike Wallace on November 22, 1963 (despite the erroneous date on the video), the day JFK was shot … In old-school TV style Alexander Kendrick reports grudgingly on Britain’s energetic threat to The American Way under the title, The Beatles, New Phenomena In Britain. Asked about the band’s future Paul McCartney says: “We could have quite a run.”

ANOTHER LEGEND IN THE MAKING

➢ At the Northern Echo in 1963 its young editor was Harold Evans, who went on to build the international reputation of The Sunday Times. On Nov 22, after putting the Echo to bed, he was being driven to Stockton for the annual press ball when news of JFK’s assassination came over the car radio. He immediately returned to his Darlington office and produced an entirely new paper. Evans decided The Beatles were worth a few downpage column inches squeezed into the Teesside edition only.

Satirists on their firing range: at left, David Frost leads the TW3 team in the studio

❚ THE MOST INFLUENTIAL TV SERIES in British history – the lodestar for all future comedy, and more – won no fulsome retrospective from the BBC on its 50th anniversary today. Only a brief item on the Today show reminded us how the earth tilted at 10:30pm on this night in 1962 with the launch of TW3 – the adopted shorthand for That Was The Week That Was. New research reveals that this politically insolent television voice of Britain’s nascent satire movement attracted complaints by the thousand. “No other programme has so many files in its correspondence section,” we were told this morning by historian Morgan Daniels on the Today programme. What it had done, according to Private Eye’s first editor Christopher Booker in his landmark 1969 book The Neophiliacs, was finally to break free from the Presbyterian straitjacket of Lord Reith, the BBC’s founder. Within weeks pubs started emptying on Saturdays as the nation made a ritual of rushing home to catch TW3’s 37 broadcasts which grew an audience of 12 million in less than a year.

A galaxy of leading “Northern Realist” writers and national newspaper journalists contributed razor-sharp sketches and what little remains available on video makes today’s comedy seem lily-livered. TW3 made the career of Sir David Frost who was its “classless” front-man at the age of 23. Though many satirists say they achieve no lasting change, on tonight’s Loose Ends radio show, Frost insisted that satire does have a knock-on influence in its day, even if it may not reform legislation in the long term. TW3’s second series was curtailed on December 28, 1963, for fears it would unbalance the general election campaign of 1964. 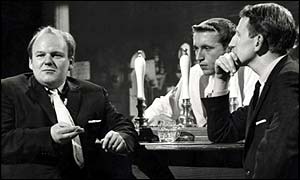 TW3 captured a zeitgeist unique to the 60s before they began to swing. Booker argued in The Neophiliacs: “It was a final drawing together of almost all those threads which had been working for ‘revolution’ and sensation in the England of the previous seven years.” [Namely, since the election of 1955 when slippage of the tectonic plates supporting Britain’s centuries-old class system saw the subsequent rise of the “unposh” intellectual and of John Osborne’s “angry young man”] … “[TW3] brought the destructive force of the satire craze to a mass audience.”

Britain was changing. Deference was on the way out, The Beatles were on their way in. The satire boom was in full swing…/ Continued inside

➢ Read on inside for a fuller analysis by Shapersofthe80s
of the 60s satire boom – plus a gallery of rarely seen images from TW3, and more vintage videos

❏ Year-ending round-up of TW3 highlights, Dec 1963 (above) – includes notorious Mississippi number with black-and-white minstrels in the week a white protester walking from Alabama to Jackson was shot dead by the road … The consumer guide to religion … Timothy Birdsall draws the Duke and Duchess of Eastbourne … MPs who have not spoken in Parliament are named and shamed … Bernard Levin harangues a pride of lawyers with their failings.