➤ Lest we forget: man has changed his ways since Peter Wyngarde cracked the sickest joke on vinyl 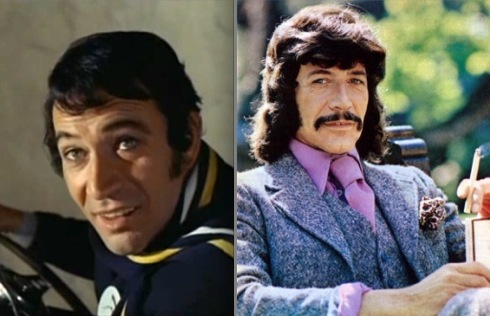 From villainous to tasteless: At the age of 32 Peter Wyngarde was distinguished enough to guest-star as the sinister Number Two in the epic TV series The Prisoner (1967). Two years later he created the novelist-cum-sleuth Jason King in Department S

❚ EMMA PEELPANTS is a keen-eyed blogger who plunders magazine and retail archives in search of 60s clothes and the whole vulgar, vibrant style of that swinging decade. Once in a while, she has a mensday and today she exhumes that male stereotype, “the heel” — the overbearing, amoral lothario who 40 years ago fancied himself rotten and treated women as playthings. Miss Peelpants publishes a hideously recognisable illustration of a heel from a copy of the teenage magazine 19, dated 1972, where one such sophisticat is grinding his heel into a bevvy of scantily clad girls. 19’s Guide to Recognising a Heel shows the just-got-out-of-bed coiffed hair, the bandito moustache, the whisky-and-cigarette in one hand, plus total absence of a smile, which he would have deemed too uncool.

To anybody of a certain age, the dandy in the illustration is all too visibly based on the actor Peter Wyngarde who shot to fame playing exactly this kind of international playboy in two late-night TV espionage series at the dawn of the 70s, Department S and Jason King. These expressed notions of contemporary glamour by being set in airports and beside Riviera pools. Their action-hero won awards as the “Best Dressed Man In Britain” while Sun readers voted him the “Man With the Sexiest Voice on Television”.

What Emma links us to is possibly the most offensive song ever recorded by a star considered suave in his day. The one-off “comedy” album for RCA in 1970 was titled Peter Wyngarde and billed as dwelling on “the darker side of human behaviour”. It was said to have been withdrawn from sale after four days. Unbelievably it was re-released on RPM in 1998 retitled When Sex Leers Its Inquisitive Head with a “Don’t buy this” warning on the sleeve. As a model of appalling bad taste it not only leaves no innuendo unturned, but contains one track actively celebrating rape.

Lest we doubt that political correctness has delivered a few benefits over the years, the Lipstick Thespians have posted this number on YouTube. For those who wish to avoid hearing Wyngarde’s ripe spoken-word rendition, the Thespians have posted the full wince-making lyrics (words and music by Hubert Valverde and Peter Wyngarde). Many people feel that the actor met his just desserts when he wrecked his career in what politicians euphemistically call a moment of madness in 1975. He’s still alive and kicking and signing autographs, now aged 77.

❏ RHODA DAKAR (left), lead singer of The Bodysnatchers, but here as The Special AKA, made The Boiler the strongest single of 1982 in this writer’s opinion, and deeply chilling. Despite being shunned by the safe daytime BBC radio deejays, it was well played by John Peel and spent five weeks in the UK singles chart, reaching No 35. The rare video below has ropey vision but good audio and it pays to listen right to the end.

Jerry Dammers formed The Special AKA, along with Dakar and John Bradbury, after The Specials announced their break up in 1981. Their first single release was The Boiler by Rhoda with The Special AKA (written jointly by the band and produced by Dammers on 2-Tone Records in Jan 1982).