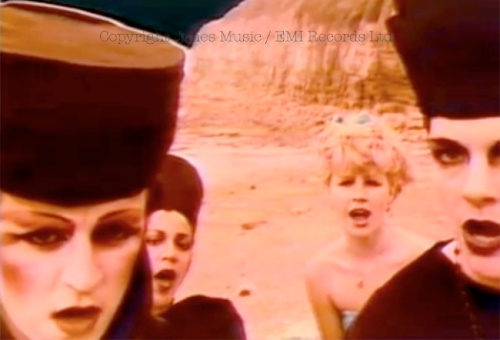 ❚ A FAMOUS OWNER can certainly bestow prestige on a work of art. Indeed when Bowie’s own contemporary art collection went for auction at Sotheby’s in 2016 there was an online frenzy to snap up most of the 147 items – at prices which were mostly two to four times greater than the auctioneer’s top estimates. Some artists managed to attract TEN TIMES their top asking price, specifically Picasso, Kokoschka, Gill, Alexander Mckenzie, David Jones, Stephen Finer, Clive Shepherd, Eric Heckel, Johann Garber, Ivon Hitchens, Maurice Cockrill.

You could call those sizeably inflated extra costs a “Bowie premium” and a lot of people were prepared to pay hair-raising prices depending on their determination to own a piece of Bowie’s legacy.

Step forward Steve Strange, or rather since Steve is sadly no longer with us, step forward fashion designer Judi Frankland, one of the wildest of clubland’s Blitz Kids, best known for her fab 1980 degree collection immortalised in Bowie’s Ashes to Ashes video. There, Steve Strange sports more than one hat, most famously the ornate veiled head-dress made of stiffened lace on a metal frame by Stephen Jones, worn with Judi’s black wedding dress in long shots. But he also sports a smaller, snugger hat in certain chorus close-ups on the beach and later in the studio and this titfer, described today by a London auctioneer as a “wide pleated chiffon band and large taffeta bow to rear”, is being offered for sale on 7th December at £200-£300.

Hm. So two premiums come into play here to determine the market value of this chic little titfer 40 years after Judi ran it up. For making it famous, a Bowie premium of two to four times the estimated price, would bump its worth up to, say, £900; plus a Steve Strange premium for sporting it at the video shoots. 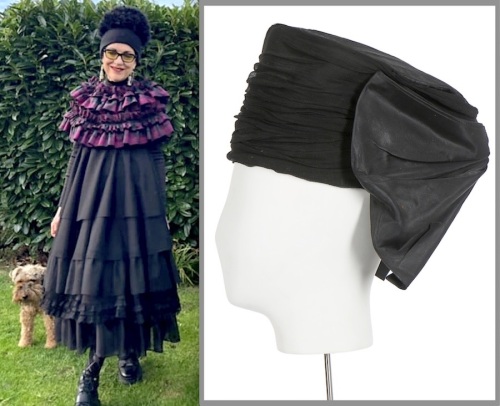 Former Blitz Kid Judi Frankland: Her latest voile and taffeta creation with capelets is crowned with a hat of maribou feathers… Right, her 1980 hat for sale with chiffon band and taffeta bow, photographed by Kerry Taylor Auctions

So what is a Steve Strange premium worth? Remember that other auction last March when Auction Antiques in Exeter sold an Issey Miyake suit belonging to David Bowie, which he supposedly discarded in the Blitz Club after burning it with a cigarette (on a specific date long after the Blitz had closed!)? Steve Strange took it home and following his death in 2015 it was inherited by his long-time friend Jayce Lewis who subsequently offered it for sale via Auction Antiques who reckoned it could fetch an estimated £10,000-£15,000. Trouble was, in this sale there were so few bids that it yielded only £8,000, which you could interpret as the “Strange premium” proving to be more like a forfeit of 36%. Apply that to Judi’s hat and its possible worth comes down to around £576. Which is better than nothing, obvs.

Kerry Taylor Auctions in London has a fine reputation for selling vintage fashion worn by such celebs as Princess Di and Amy Winehouse. And next week they’re selling Judi’s long-lost hat as Lot 155A. The website tells a tale of its owner Roz Corrigan wearing it on the eve she met her future husband. Aw, sweet.

Dear old Judi can’t even remember how the hat vanished from her Cranley Gardens flat way back when. “I have no doubt it’s my hat,” she tells me, having seen the photo online. “It was possibly crushed in my wardrobe as I was as bad as Steve was with my frocks.” She recalls how her sensational black wedding dress had returned from the seaside video location covered in mud and make-up and vanished into the recess Steve Strange called his wardrobe, never to be seen again. She adds however: “That hat would never have stood a chance of surviving if it had stayed with me and not been given away.”

➢ The Kerry Taylor auction Passion for Fashion starts at 1pm on Tue, 7th Dec 2021, both in Bermondsey (booking essential) and online

➢ Previously at Shapers of the 80s:
1980, Bowie recruits Blitz Kids for his Ashes video