◼ TWICE IN 40 YEARS Camden Town’s most renowned theatre has been set ablaze. Last night the 119-year-old former Royal Camden Theatre, currently known as the nightclub Koko, burst into flames at about 9pm during the course of renovation work. Video footage showed giant flames devouring its historic copper dome. London Fire Brigade reported 30% of the roof to be alight and despatched eight fire engines and 60 firefighters to tackle the inferno.

The venue was also damaged by fire during its last gasp as the post-punk Music Machine, soon after a Theatre of Hate gig in December 1980. Subsequent restoration saw it reopen in 1982 renamed the Camden Palace as Steve Strange and Rusty Egan made this the flagship for their New Romantic movement when they took it mainstream. Madonna played her first London date there by Rusty’s invitation. 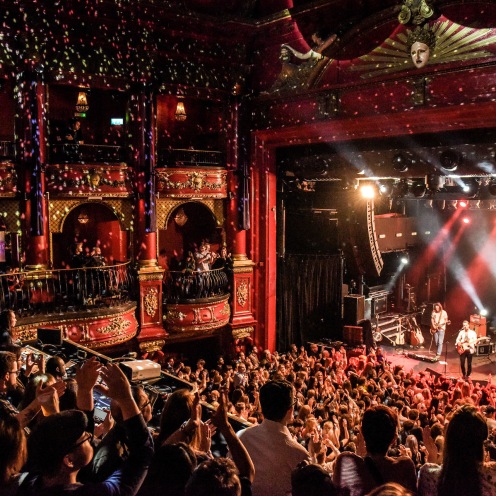 The Royal Camden Theatre in 1901: crowned by eight statues of classical figures around the dome

Madonna at Koko in 2005: revisiting the stage where she made her London debut. (Photo: Getty)

The rave scene saw Camden Palace through its second decade until it closed in 2004. Koko emerged after major refurbishment of its richly ornate interior by new owners who established a cool reputation for live music and with clubbing capacity for 1,500 people. However during further refurbishment in September 2018 surveyors deemed the building unsafe so the venue was forced to close.

Theatre historian Matthew Lloyd reports: “As of 2017 the theatre was to undergo a full restoration, including the replacement of the cupola on the roof. The Hope and Anchor at the back of the theatre was projected to become a boutique hotel at the same time, and would be a part of the whole complex, including a restaurant on the roof.” This £40-million state-of-the-art redevelopment was scheduled to finish in April this year but the latest fire is likely to impose a delay.

Opened in 1900 by the celebrated actress Ellen Terry, the theatre has enjoyed a dozen or so reincarnations as playhouse, music-hall and until 1940 as the Hippodrome and Gaumont cinemas. In 1945 the BBC revived the Camden Theatre name as its studio for recording variety shows and most famously The Goon Show (1951-60), starring Spike Milligan, Harry Secombe and Peter Sellers. Their Last Goon Show of All was recorded for radio and television at the studio in 1972, the year the building was awarded a Grade II listing. It had lain empty for several years and faced demolition, so the listing at least postponed that fate. English Heritage drew attention to the original architecture by W.G.R. Sprague, celebrated for his many West End theatres: a pillared façade “in baroque pastiche style”, and cantilevered dress circle and balcony with plaster work by Waring & Gillow in a mixture of baroque and rococo ornament.

Let’s hope Koko’s owners can wave a wand to revive the lustre of this iconic play-place.

POSTSCRIPT IN THE TIMES

➢ Another iconic building wrecked by fire during renovations – Richard Morrison in The Times’s arts column writes on 10 Jan 2020:
“ It’s striking how often historic buildings go up in smoke when there is renovation work happening, as there was at Koko… Recent examples are the 2018 fire that ripped through Charles Rennie Mackintosh’s superb Glasgow School of Art building as a £36-million restoration was being completed after a fire in 2014. Incredulous MSPs of all parties asked a series of questions that mostly cannot be answered… And the fire that devastated Note-Dame in Paris… rebuilding doesn’t appear to be going smoothly either… ”/ Continued online 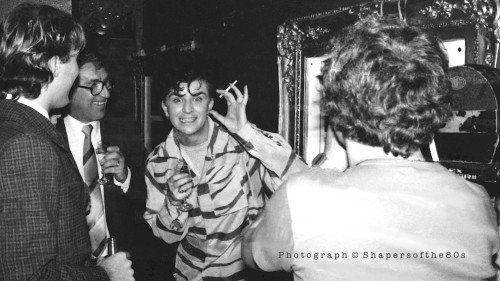 Steve Strange in 1982: invariably being filmed at Camden Palace

➢ Previously at Shapers of the 80s:
1983, Posing with a purpose at the Camden Palace