❚ A DECADE SHIFT HAS MOVED Thief’s sound into another era of Britpop. Wednesday’s live set of half a dozen numbers at the Hoxton Bar and Grill suggests that the electro duo’s early 80s vibe has acquired the garagey feel of the 90s, while still evincing languid romance.

Mesmeric hints of Sade layered with essence of Massive Attack result in laid-back electronic lounge music with kickin’ beats and bleeps. The single Friend Lover becomes a mildly melancholy love song as delivered by its lyricist, drama-studies graduate Charlotte Mallory, yet it is propelled by the optimistic harmonics and percussion of Fin Munro, keyboardist, deejay, producer and London club-host. As they told radio deejay Gary Crowley in an interview last month, their songwriting partnership pursues the themes of soul and emotion, complicated feelings and unrequited love.

An EP is planned for release within the next couple of months. Meanwhile catch Thief again on Thursday Jan 30 at The Notting Hill Arts Club. 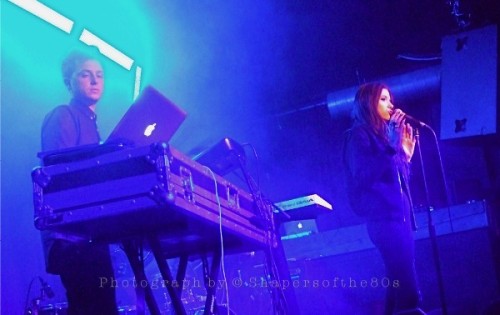 ➢ Fin Munro interviewed at Farah, Feb 6:
“ We’re a two piece, Charlotte sings and I play the music. We’ve been influenced by bands like Sade, Everything but the Girl, but also more recent acts like SBTRKT, James Blake and Purity Ring. We’re an electronic band but we definitely have influences of soul and R&B in our songs… ” / Continued online

➢ Charlotte Mallory blogging at Huffington Post, Feb 6:
“ Fin and I first met at a house party four years ago. He’d just been to see The XX at Maida Vale studios earlier that day, so was feeling musically inspired to start something new. Although we didn’t form Thief that year, we began sending each other music we liked and kept in contact while I was studying at Sussex Uni in Brighton and he was DJing and running club nights in London… ” / Continued online

➢ Previously at Shapersofthe80s: Fin Munro plunges into love and takes a walk on the wild side

One response to “➤ Thief duo take a trip into the 90s”