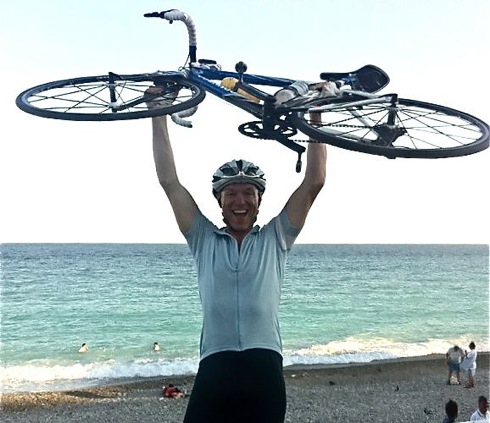 ❚ HARD TO KEEP TRACK OF THE NEW DAY JOB as songwriter Gary Kemp turns his hand to, well, a portfolio of new careers. Since their year-long Reformation tour ended in 2010, it has become clear that any further life for Spandau Ballet as a band is dependent on the good will of singer Tony Hadley. Meanwhile, every other band member has taken Hadley’s cue to strike out in new directions and establish his own website and Twitter account through which to promote his own solo skill-set.

What’s the latest venture for 52-year-old Gary Kemp? This week, among other things, he is a sports columnist. Later this month he reverts to his popstar guise by unveiling a plaque to Ziggy Stardust, the definitive rock icon created by David Bowie, on the site of his seminal 1972 album cover photo in central London. Within recent weeks Kemp has also launched a book of his lyrics, curated a filmed Dickens tribute for a new culture website, and incidentally became father to a third son, Rex.

The commemorative wall plaque anticipates the 40th anniversary on June 6 of the release of The Rise and Fall of Ziggy Stardust and the Spiders from Mars. The honour is being bestowed by, wait for it, The Crown Estate, which represents all property owned by the reigning monarch, the oldest dating from the Norman conquest of 1066. Today’s total is estimated to be worth £7billion. 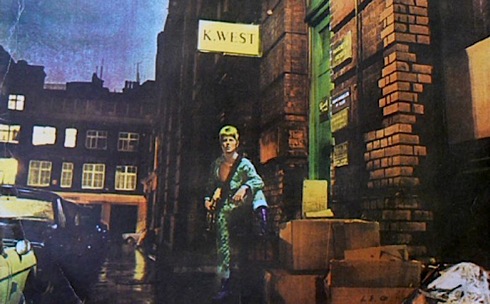 Commemorative wall plaque imminent in Heddon Street: Bowie photographed by Brian Ward in 1972 for the iconic Ziggy Stardust album sleeve. Gary Kemp describes the scene as a set for a film noir

The Estate is landlord of the building at 23 Heddon Street W1B 4BQ, where Brian Ward photographed Bowie in the rain beneath the yellow sign for the furriers K. West. (Shot in black and white, the cover pic was hand-tinted by the artist Terry Pastor which is why Bowie’s green stage jumpsuit here looks blue.) Today this is a pedestrianised strip of foodie destinations, yet a regular stream of Bowie fans makes the pilgrimage to this enclave off Regent Street to be photographed in the same pose on the same spot, thrilled also to find the red phonebox from the back cover still there. Undoubtedly at 9.45 on Tuesday 27th many more will be joining the speechifying at a press photocall as Gary Kemp pulls the unveiling cord.

➢ Update March 23: Hear Robert Elms interviewing Gary Kemp on BBC London, on the impact of Bowie’s creation Ziggy Stardust, and the concept album which sees a messiah arriving to save the last rock’n’roll star on planet Earth. All of which had peculiar resonance in the Cold War era, and on the teenaged Kemp in 1972 when many felt rock music was finished. Bowie’s album was, he says, “something to upset my parents with”

Yesterday, however, it was Kemp the cyclist who was announced as a sports columnist in the UK edition of the Huffington Post, the liberal-left American news website founded in 2005 by Greek-American Arianna Huffington and acquired last year by AOL for $315million. Born Arianna Stasinopoúlou, she attended Cambridge University in England, became president of the union, and met Britain’s most prolific newspaper columnist Bernard Levin who was twice her age and proved an inspired mentor during their nine-year relationship. She broke with him in 1980 and moved to New York, later marrying Republican congressman Michael Huffington, and divorcing him shortly before he disclosed he was bisexual. She campaigned as an independent candidate against Arnold Schwarzenegger to become governor of California in 2003. (Colourful background, huh?)

Back to Kemp: his new column represents a novel way to express his undoubted literary talents which made his own book I Know This Much almost unique among rock autobiographies for being compulsively readable, as well as “a touching testament to spiritual growth”. Yesterday he introduced his passion for cycling in the HuffPost under the headline Bikes and Babies …

“ As birds begin to re-discover their song and Tarmac becomes sticky with the falling dew of budding trees, the Lycra-clad roadie reaches for his shaving cream and attempts to remove the thick, bee-catching hair that has formed around his legs during winter. This act will almost certainly upset my wife, who considers such things the territory of transvestites; but as I trickle blood down the plughole, the approval of my roadie peers is uppermost in my mind; after all, the aesthetics of riding, along with its tribal camaraderie, are why I came here in the first place.

‘Training’ has begun. Training turns cycling into a job of work; something earnest, painful; it eases our guilt — and oh boy, am I guilty! My wife and I have just increased our brood of young children to three, and chamois-creaming my crotch while she’s soothing the baby’s nappy rash just doesn’t seem right…” / Continued online

But the big event of the week came on Monday when Kemp took his first steps to inherit the mantle of Melvyn Bragg and become an arts guru of the small screen by dreaming up a 200th anniverary celebration of the author Charles Dickens.

A classy new culture website called HiBROW was recently launched under the guiding hand of film-maker Don Boyd. He has invited an eclectic selection of professionals across the arts to play the role of curators and create original, high-definition video arts programming for exclusive viewing online. The first project Gary Kemp proposed was a live “post-modern” chat show, A Mighty Big If, hosted by 80s musician Richard Strange. Now Kemp can be seen prowling the snow-covered Victorian gravestones of Highgate Cemetery in search of Dickens’s family. With broadcaster John Waite, Kemp also discusses Tom Sayers, a Victorian champion bare-knuckle prize-fighter who attracted 10,000 mourners to his funeral there. 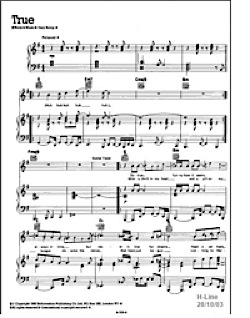 We also see Joanna Lumley and Simon Callow, famous thespian fans of Dickens, introduced by great-great-grandson Mark Dickens before they give readings from Charles’s work between the graves. Callow, who has depicted Dickens onstage acting out his stories, insists the author today would have been directing and starring in his own screenplays.

As for GK, all that’s left for him to try are tinker, tailor, soldier, spy!

PS MAY 17: SUCCESS REAPS ITS REWARD

➢ May 17 update: Gary Kemp wins Outstanding Song Collection Award at the 2012 Ivor Novellos — “It’s made me feel very nostalgic for that 12-year-old boy, who in 1972 started writing songs alone in his bedroom and wondered if he was weird.”