Choirs of Westminster Abbey and Her Majesty’s Chapel Royal, during today’s wedding of Prince William and Catherine Middleton

❚ VYING WITH MANY VISUAL TREATS TODAY at the wedding of Prince William and Catherine Middleton in Westminster Abbey was the well chosen and home-grown music. Three pieces were drawn from every Sloane’s wedding favourite, Hubert Parry, the 19th-century composer who knows how to tug at toff heartstrings. Despite which, he does rank among England’s finest and is best known for his rousing hymn Jerusalem, which inevitably followed the prayers today.

But to modern ears, the musical highlight was a soaringly beautiful choral anthem that followed the bride and groom’s marriage vows and preceded the Bishop of London’s address. Titled This is the day which the Lord hath made, the romantic three-minute piece was specially commissioned by the Dean and Chapter of Westminster for this service. Its uplifting theme wove together words from four Psalms (as published in The Book of Common Prayer) including these from Psalm 121 — “the sun shall not burn thee by day: neither the moon by night”.

The music was written by the English composer John Rutter (b 1945) who is also a conductor, editor, arranger and record producer with his own label, Collegium Records. The past day has seen reaction to the new anthem cause an immediate surge of hits at Google. Dr Rutter is said not to see himself as predominantly a composer of sacred music though he has set many psalms and carols and much of his work has a spiritual dimension. Most of his choral work has been subsequently transformed with an orchestral accompaniment so with luck this elegant piece too might be released in this way.
Listen here to the new anthem, as sung at the wedding by the choirs of Westminster Abbey and Her Majesty’s Chapel Royal, St James’s Palace, conducted by Mr James O’Donnell, organist and master of the choristers, Westminster Abbey. The organ is played by Mr Robert Quinney, sub-organist, Westminster Abbey.

➢ Among the music choices for the royal wedding, one was a stroke of genius — Chris Chivers singles out Parry’s Blest Pair of Sirens in The Guardian

❚ WHETHER YOU’RE A MONARCHIST OR NOT, the rest of the world went ape for the royal family yesterday. By 11am BST, 10 of the top 20 Google searches in the US related to the royal wedding. Likewise on Facebook, the top 10 keywords trending as public status updates in the US and UK were all wedding-related, led by Royal Wedding, Prince William, Prince Harry, Kate Middleton.

INTERNATIONALLY, the advance estimate predicted two billion people would tune in to Friday’s TV coverage of the Royal Wedding between Prince William and Kate Middleton, though this figure has yet to be confirmed. About 8,500 journalists were in London for the event. 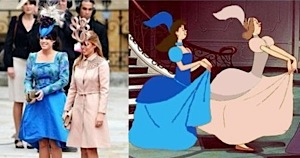 ➢ IN THE UK, across the whole BBC, 34.7m viewers tuned in to watch some part of the wedding, including a million people online using BBC iPlayer. There was a peak of 6.1m viewers watching the coverage on ITV1 as the service began, the commercial broadcaster reported. Sky News had a peak of 661,000 viewers at 11am, with roughly one million people using its website.

➢ YouTube’s live feed brought the BBC’s pictures to a global online audience through its Royal Channel — which was the 23rd most-visited YT channel of the day, but trailed behind America’s Next Top Model and Top Gear.

➢ Surge in electricity demand suggests record television ratings — Daily Telegraph report
The surge in demand for electricity in the UK at the end of the royal wedding was the fourth-highest ever caused by a televised event. National Grid said that, when the couple reached Buckingham Palace after the ceremony at 12.40pm, demand for electricity increased by 2,400MW — the equivalent of nearly a million kettles being turned on at the same time. The surge was a third higher than that recorded after the wedding of Prince Charles and Lady Diana Spencer in 1981, which registered 1,800MW when 28m people had been watching in the UK.

That dazzling dress effect: National Grid also registered a 1,500MW drop in demand when viewers had their first glimpse of Catherine Middleton’s wedding dress as she got into her car to the abbey — with such a drop (rather than a surge) indicating that people were flocking to their televisions rather than carrying on with more electricity-hungry activities.

Electricity demand surges do not directly correlate with TV ratings, because they indicate how many people got up to switch their kettles on to make a cuppa — rather than the total number of people watching to begin with.