❚ CENSORSHIP! OH DEARIE ME! Digital Spy reports this weekend that the lavish video for Firework — the single currently No 4 in this week’s UK chart by American singer-songwriter Katy Perry — has been censored for British television channels. The ludicrous widescreen promo, which they say “plays out the song’s message of self-belief” (yuk), shows fireworks shooting from Perry’s chest, and from the bodies of prancing extras. More shocking, apparently, are the pyrotechnic depictions of a mugging, a cancer patient, a woman giving birth and two men kissing. The two-second “gay kiss” has been pixelated, presumably to save embarrassing the children, in a version of the video directed by Dave Meyers for delivery to TV channels under a cross-promotional deal with Deutsche Telekom. The European telecommunications group recruited fans from all over Europe to appear in the video when it was shot in Budapest.

It’s all too much. Why, this weekend too, fansites have been twittering that Katy Perry and BFF Rihanna got into an argument over Katy’s new hubby, the amoral buffoon Russell Brand (double yuk). The only good news is that Katy has at least vowed never to strip for Playboy.

According to the star herself, Firework is influenced by Jack Kerouac’s novel about male bonding, On the Road. Digital Spy’s reviewer Nick Levine even accords the song the accolade of being a “straight up self-empowerment anthem”. Pass the sickbag, James.

OK, OK, boys and girls. In Frankie Goes to Hollywood’s immortal words, relax. For any TV viewers feeling deprived of the knee-trembling kiss in the Perry video, which is of course viewable in full 1080p HD on YouTube, there’s plenty more where that came from. The web is replete with more pop videos flaunting gay kisses than mum and dad might wish for. The following links round up the most notorious from both genders — four are viewable only behind age-restricted gateways. And because it’s so darn funky, Shapersofthe80s has thrown in the Pet Shop Boys’ most notorious Bruce Weber video for Being Boring, which contains naughtiness on any number of levels, but you’re going to need gimlet eyes to spot the gay kiss. You’re very welcome to propose your own favourite pop kisses. Thanks to Jobe, we’re up to 20 vidz now. 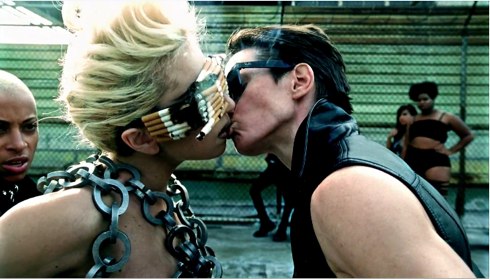 Lady Gaga: a jailbird’s perk in the video for Telephone

♫ Yehonathan’s On a Hot Summer Night

♫ Tatu’s All the Things She Said

♫ Matt Alber’s End of the World

♫ Kylie’s All the Lovers

♫ Pet Shop Boys’ Being Boring — a film by Bruce Weber

➢ Read on in the New York Times:
For Gays, New Songs of Survival

“These artists represent a new wave of young (and mostly straight) women who are providing the soundtrack for a generation of gay fans coming to terms with their identity in a time of turbulent and confusing cultural messages.”