Boy into man: Keith Richards in 1969 and after 40 years of living the life (EPA). Note in particular the hat and read on...

❚ BY THE MID-60S THE ROLLING STONES had become global superstars, though demonised for the raw sexuality of their songs and performance style. Guitarist Keith Richards is the man whose debauchery epitomises the ethos of sex-and-drugs-and-rock-and-roll, and on October 26 his “long-awaited” autobiog called Life is published by Weidenfeld & Nicolson. As if the UK’s tenth richest musician needed the cash — he is worth £175m in The Sunday Times Rich List — reports say he received an advance of £4.8m ($7.3m!!!) after a bidding war for the text, written with James Fox.

It amounts to a tawdry sequence of profane, drug-fuelled, low-life anecdotes from which nobody emerges with much integrity, like a bunch of amoral delinquents. Quite what excited The Times of London to devote three days-worth of space to this book is beyond comprehension. Under the headline Muddy Waters, Saturday’s main editorial in the paper actually damned the Richards yarn as “filthy” and “depraved”, while seeking to justify serialising massive chunks on the ground that “the music of the Rolling Stones has endured”, thanks to the band’s “sheer work ethic” !!! (Since they didn’t rise up to ridicule this lavish serialisation, we can only assume the entire staff of The Times has been zombified under Plan 9 from Outer Space.)

Almost the whole front page of The tabloid Times trailed the Richards extracts with the stark headline “Sex, drugs and me”. Highest common denominators, evidently, for Her Majesty’s newspaper of record. And a spectacular nadir for dignity in the Thunderer’s 225-year history.

As a time-saving service to discriminating readers of Shapersofthe80s, here are the juiciest bits, but be warned — do not raise your expectations above the navel. Ready with the sickbag, James!

In Friday’s interview with 66-year-old Richards, 35-year-old Caitlin Moran called the book a “total hoot” and through its sordid junkie haze introduced us to every mother’s idea of the son-in-law from hell. Right from chapter one, she said, he’d worn a hat made of drugs (“There was a flap at the side in which I’d stowed hash, Tuinals and coke”) and driven a car made of drugs (“I’d spent hours packing the side-panel with coke, grass, peyote and mescaline”).

Moran reports that Richards “gave up heroin in 1978, after his fifth bust, and he reveals today that he has finally given up cocaine, too — in 2006, after he fell from a tree in Fiji and had to have brain surgery:

❏ “Yeah, that was cocaine I had to give up for that,” he says, with a sigh. “You’re like: ‘I’ve got the message, oh Lord’.” He raps on the metal plate in his head. It makes a dull, thonking sound. “I’m just waiting for them to invent something more interesting, ha ha ha. I’m all ready to road-test it when they do.”

Throughout the Moran interview, he was of course smoking Marlboros and drinking vodka. His idea of totally clean, presumably.

In Saturday’s Times serialisation of Life, Richards recalls the Stones’s founding guitarist Brian Jones, who originally proposed the band’s name in 1962 and was to drown needlessly at the age of 27 in circumstances that remain unclear. He was neurotic, suffered from deteriorating health, he pushed friendships to the limit and treated women despicably. In Marrakesh in 1967 he and his girlfriend Anita Pallenberg had reached the end of their tethers. Richards writes:

❏ “They’d beaten the shit out of each other. And of course Brian starts trying to take Anita on for 15 rounds… Once again he breaks two ribs and a finger… Then Brian dragged two tattooed whores down the hotel corridor and into the room, trying to force Anita into a scene, humiliating her in front of them. He flung food at her. At that point Anita ran into my room… She was in tears. She didn’t want to leave but she realised that I was right when I said that Brian would probably try to kill her.”

Having “stolen” Anita Pallenberg from Jones to become Richards’s common-law wife, back in the 1970s some reciprocal bed-hopping took place between Richards and Mick Jagger’s girl Marianne Faithfull, and between Anita and Mick. This was when Richard learned his best friend was a disappointment in the sack, giving rise to his verdict on the over-rated Jagger jewels:

❏ “[Anita] had no fun with his tiny todger. I know he’s got an enormous pair of balls, but it doesn’t quite fill the gap, does it?” 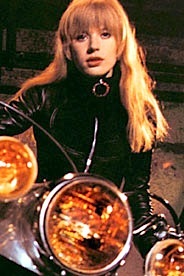 Marianne Faithfull in the British film Girl on a Motorcycle, 1968

Life describes in detail the fabled 1967 drug bust at the Richards Sussex house, Redlands [reported in the collage above], which became a totemic cause célèbre when William Rees-Mogg — the down-with-the-kids editor of The Times — took on the crusty old establishment by denouncing the harsh jail sentences which followed. Richards writes that the raid was “a collusion between the News of the World and the cops, but the shocking extent of the stitch-up, which reached to the judiciary, didn’t become apparent until the case came to court”. He also sets the record straight on the role of a legendary Mars bar:

❏ “[Marianne Faithfull] had taken a bath upstairs, and I had this huge fur rug, and she just wrapped herself up in that. How the Mars bar got into the story I don’t know. There was one on the table — there were a couple, because on acid you get sugar lack and you’re munching away. And so she’s stuck for ever with the story of where the police found that Mars bar. And you have to say she wears it well.”
Etc etc etc etc

➢ “The Mars bar was a very effective piece of demonizing” — Marianne Faithfull in her own autobiography. More pictures and background at Another Nickel In The Machine

➢ Who was the Redlands informer? — All about the police drugs raid on Keith Richard’s home on Feb 12, 1967 at the History of Rock Music

“The most sexually charged film ever”: the androgynous Michele Breton and Mick Jagger in Performance, 1970

➢ Judge the Jagger todger for yourself at Another Nickel: Anita’s footage of Mick’s meat and two veg filmed during the making of Performance at 81 Powis Square in 1968

The guitarist’s hands in 2010, photographed © by Mario Sorrenti: the original skull ring that has become a rock-and-roll icon was given to Richards by London goldsmiths David Courts and Bill Hackett as a birthday present in 1978