➤ In the face of Cowell X-culture, Polhemus discovers the style supermarket afresh

❚ IN ITS FIFTH ANNIVERSARY ISSUE, i-D MAGAZINE asked its photo-gallery of People of the 80s to sum up that year, 1985. Shapersofthe80s replied: “It is the year the style supermarket repackaged the previous four as an over-the-counter culture.” What was being signalled was the end of the Swinging 80s, the symbolic sub-cultural “decade” which had seen Soho become the crucible for new sounds and new styles as they broke free from the stadium-rock and post-punk past. 1985 saw a torrent of colour and attitude and tunes drive the mainstream of British youth culture that then came to characterise the “Thatcher decade”, at best personified by Stock Aitken Waterman, and at worst traduced by nightclub impresario Peter Stringfellow.

Polhemus as 70s hippie — wardrobe master for Starsky and Hutch, or his idea of irony?

Tonight in Shoreditch, the new London pool of cool, an eponymous exhibition opens to launch an updated edition of Street Style, the 1994 picture book by Ted Polhemus that celebrated the style-tribes which postwar Britain’s class-ridden society excelled at evolving, from mods and rockers, to goths and casuals, to ravers and what he called riot grrrls (which inevitably invoked the dread term bricolage, so much more cultural studies than saying DIY). Publication coincided then with a groovy exhibition around the V&A costume court.

Images and graphics from the new Street Style inevitably feature many of our original Shapers of the 80s, if current Facebook twitterings are any indication. These are being exhibited (Sep 30-Oct 31)  in the former Victorian warehouse in EC2 refurbished as The Book Club. Polhemus’s new publisher is PYMCA, the Photographic Youth Music Culture Archive which was established in 1997 by Jon Swinstead, brains behind Jockey Slut and Sleazenation. His aim was “to create a collection of images that capture the real essence of life as a young person”. PYMCA was launched this spring as a research resource, having teamed up with leading cultural commentators to offer detailed analyses of youth subcultures, music and movements around the world. Swinstead maintains: “PYMCA is both edgy and documentary and the newest material will visually reflect the hottest stuff happening among the youth of today.”

Next month Polhemus, the self-styled “anthropologist, author and photographer extraordinaire”, leads a discussion at The Book Club titled “Supermarket of Style in the 21st century” (Oct 27, tickets £8). This is the theme that introduces his new book and which he calls “his latest theory”. Well, better late than never! The supermarket has certainly entertained us for 25 years but a general consensus agrees that Britain’s youthful creative juices finally ran dry in the noughties as Cowell X-culture came to dominate our televised lives. Presumably Ted has fresh observations to offer… 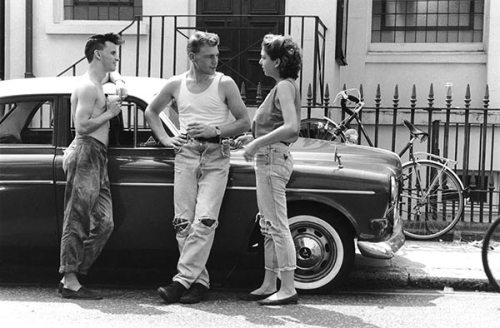 The no-socks “hard times” style promulgated by the itinerant Dirtbox club-nights: The ever-photogenic Paul Sturridge caught in 1984 with Dale and Susan Cammack, plus his Volvo Amazon outside the Chelsea Potter. From the Street Style exhibition at the V&A, photographed © by Ted Polhemus

AT THE EVENT, STURRIDGE CATCHES THE MOMENT . . .

At the book launch: cover stars the Okonkwo twins with Theola Sturridge. Photograph © by Paul Sturridge

A lifetime later: Paul Sturridge with daughter Theola beneath the photo of him in his “hard times” guise. Photograph © by Paul Sturridge