➤ Six things some people might not know about Bowie

Ziggy shocker: Bowie goes down on Mick Ronson’s guitar in 1972 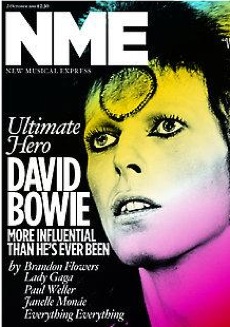 ❚ WHAT MORE IS THERE TO SAY ABOUT BOWIE? To coincide with this week’s release of the mega-superduper collectable special edition 3-CD box set of Station to Station, an NME photo gallery of the godlike one reveals 50 things it thinks we don’t know about Bowie and here are five of them…

❏ A teenage Bowie was interviewed on a BBC programme as the founder of The Society for the Prevention of Cruelty to Long-haired Men. He complained: “It’s not nice when people call you darling and that.”

❏ Peter Frampton, of Baby I Love Your Way, was Bowie’s friend at school — his dad was head of the art department.

❏ Space Oddity gave Bowie his big break. This now-famous track was used by the BBC in its coverage of the moon landing in 1969. Bowie was practically unknown back then – the song became his first UK hit.

❏ According to a recent [? Jan 24] piece in The Observer, David Bowie’s iPod contains Lorraine Ellison’s Stay With Me, Dinner At Eight by Rufus Wainwright, and Gathering Storm by Godspeed You! Black Emperor.

❏ Below we see David Bowie at London’s Rules Restaurant, 1973, after receiving a presentation of six discs from RCA Records. The occasion? He had six albums in the charts that year. 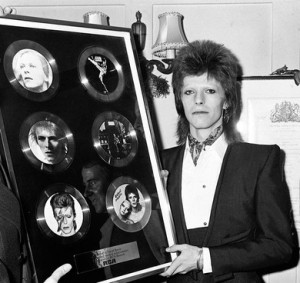 ❚ HERE’S ONE OF OUR OWN: The boy wonder was profiled in 1967 by Fabulous 208 which tells us that at the age of 20 Bowie had already written more than 60 songs. Wowie!

This entry was posted in London, Media, Pop music and tagged 2010, David Bowie. Bookmark the permalink.