2010 ➤ Robinson takes the Cowell shilling — so whose bum is on the throne at Popjustice? 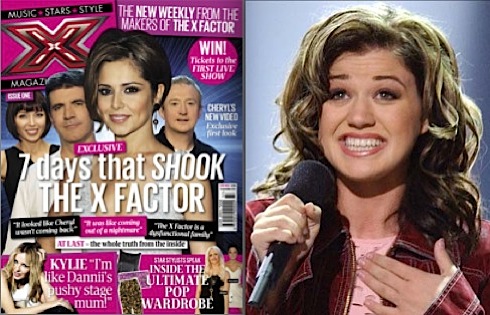 From the makers of The X Factor: a new magazine, edited by the man who toyed with Kelly Clarkson like a cat with a mouse

❚ WE LOVE HIM, THEY LOATHE HIM, the worst of them. One of the most influential and passionate commentors on the pop scene appears to have jumped ship in the direction of Simon Cowell’s entertainment goldmine. Peter Robinson, the 30-something wag and one-man Girls Aloud fanclub, has made his Popjustice blog a compelling read for fans who favour his surreal version of the truth, but a gunk tank for stars who imagine there’s any such thing as an even break.

Yet this morning’s Media Guardian unequivocally describes him as “formerly” the editor of PJ, while announcing the launch of X magazine, whose own website gives him the title of Senior Editor there. Sounds like a golden-handshake welcome to X which is to be the weekly print offshoot of the Cowell TV franchise, The X Factor. A 100-page launch issue appears tomorrow to coincide with series seven of the ITV talent show, and distribution is initially through Tesco supermarkets, price £1.95, even when the show is off-air.

A “surprising” level of access to contestants is promised, though Robinson is reported to have feared that X would be “pretty much a glorified fan magazine”. The big cheese at its publisher, Haymarket Media Group, convinced him that the owners were happy for X to “not always toe the party line”. Some might think this a risky ploy. Is the cheese actually familiar with the Robinson technique? Does the cheese know how often his notoriously cringe-making interviews must have turned a star to jelly? In fact, has the cheese read the all-time car-crash sofa-chat Robinson conducted with American Idol winner Kelly Clarkson? In which he provoked her to confess: “I’m not a man and I don’t claim to be.”

There hasn’t been a decent mag purely about pop since the upstart Smash Hits doled out respect and ridicule in equal measure. It ran for almost three decades as a fortnightly, shuffling off-stage only in 2006. Channel 4’s Popworld spin-off died after two issues in 2007. Nevertheless, according to another Haymarket cheese, women’s weeklies are reckoned to be on “vibrant” form, and Robinson is talking up his new title: “Our editorial team is the strongest of any British pop magazine in almost 20 years and this certainly feels like the biggest pop magazine launch in Justin Bieber’s lifetime.”

Robinson was working as a freelance in 2000 when, for the love of it, he founded Popjustice as a music site with attitude. He has overseen its successful monetisation in cahoots with w00tmedia, and bolted on a record label called Popjustice Hi-Fi. The Times reckons PR is one of the music industry’s Top 20 star makers while The Observer rated Popjustice the world’s most powerful music blog. So has he truly relinquished the crown after 10 years? No, of course not! What? Give up the most powerful throne in pop? That was just “a mistake/assumption on Media Guardian’s part” PR assures us. Not for nothing have hacks long dubbed it the good old “Grauniad”! So rest assured that a familiar bum stills sits in the PJ hotseat, while steering the pop universe with his left hand.