❚ MALCOLM McLAREN, THE SVENGALI OF PUNK, DIED YESTERDAY AGED 64. One of his most quotable quotes was delivered to Shapersofthe80s in 1983: “What we create on the streets out of the dustbins of England is an extremely exportable commodity.”

❚ CHRIS SULLIVAN, club-host, Blue Rondo singer and author of Punk (Cassell) “I first met Malcolm McLaren in 1976. I was a naive 16-year-old hot off the bus from South Wales and wandered into his shop Sex, in the armpit of the King’s Road. He invited me to a Sex Pistols concert that night and it changed my life.” ➢➢ Read Sullivan’s full appreciation in The Times, April 10

❚ GARY KEMP of Spandau Ballet was first to summarise McLaren’s influence for Shapersofthe80s: “He drew up the road map by which we all found success. I am shocked and reminded of my own mortality.”

❚ KIM BOWEN, fashion stylist and former Blitz Kid, said “Malcolm left his diary at my house once. I nosed, obviously: ‘There are Fashion Victims everywhere, I’m a Fashion Beast.’ He was.”

❚ RUSTY EGAN, deejay and former Blitz Kid “Malcolm was the Fagin of entertainment, teaching the young how to sell their youth for his benefit.”

❚ DEREK RIDGERS, photographer of the punk years “He had a lot of radical ideas but his true talent was the ability to wind up and goad the media.”

❚ ANDY POLARIS, former singer with Animal Nightlife “A master manipulator, a magpie and a maverick.”

❚ JAY STRONGMAN, club deejay, said “Malcolm was a true cultural visionary … an alchemist who mixed history, politics, rock’n’roll and fashion to try and create an alternative future and had fun doing it. Some say Malcolm was Britain’s Andy Warhol but I think that does Malcolm a disservice… In terms of popular culture Malcolm was much more influential than Andy Warhol.”

❚ SIMON WITHERS, one of the original fashion designers who defined the New Romantic era, and in 1983 worked on the final Worlds End collection before McLaren and Westwood split “I am really shocked by the news. Malcolm was dangerous and inspiring. I have been lucky enough to work with five mentors, he and then Vivienne being the first. Nothing compared to the scale, ambition and sheer Dickensian cheek of what I was shown working with Malcolm and Vivienne. There was a fundamental inquisitiveness about them.

“I worked three days and two nights making stuff in Paris for the last Worlds End catwalk. Vivienne and Malcolm were about to split up, as was the company. What I saw working with them both was that Vivienne had the tenacity and the intense focus, but certainly it came to little without Malcolm. After Paris, I left Vivienne’s workshop for Malcolm’s. He, Andrea Linz and I worked for a year on two or three collections. We did some really good work to find that Malcolm sold our ideas to Jean Paul Gaultier.

“One side of Malcolm that seems to be little written about is that he was a remarkably generous and attentive host and was very kind in surprising ways.”

Read how Shapersofthe80s broke the exclusive news
of the Worlds End split in Paris, 1983

➢➢ Pictured together on the very day Malcolm and Vivienne parted 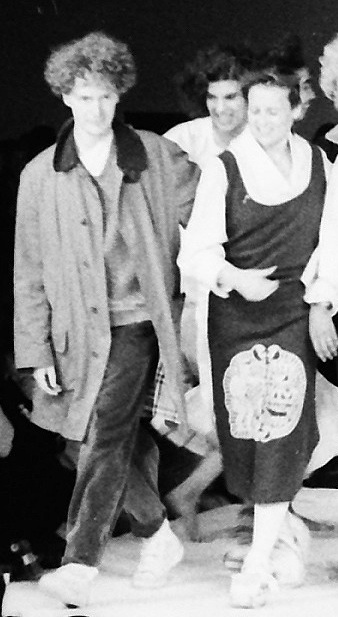 Their last public appearance together, on a Paris runway in 1983... Westwood says: “Malcolm has one more chance to be good.” McLaren says: “I’m not incapable of designing the next collection myself.” Photographed © by Shapersofthe80s

AMONG THE FIRST TRIBUTES THAT WERE PAID

❚ DAME VIVIENNE WESTWOOD, ex-lover and business partner and fashion icon “The thought of Malcolm McLaren dead is really something sad. When we were young and I fell in love with Malcolm, I thought he was beautiful and I still do. I thought, he is a very charismatic, special and talented person. We hadn’t been in touch for a long time. Ben [her son] and Joe [the couple’s son] were with him when he died.”

Mother and son: Vivienne Westwood and Joe Corre in 2008

❚ JOSEPH CORRE, son and co-founder of Agent Provocateur “He was the original punk rocker and revolutionised the world. He’s somebody I’m incredibly proud of. He’s a real beacon of a man for people to look up to.”

❚ YOUNG KIM, his partner of 12 years “Everything he did was groundbreaking, as an artist he carried on the link from Andy Warhol. I think Malcolm recognised he had changed the culture.”

❚ BARRY MARTIN, his tutor at Goldsmiths college, 1968 “Where he was clever was in using other people to do his bidding without them realising. I didn’t like him much – I didn’t like the manipulation of people’s souls.”

❚ JOHN LYDON, ex-Sex Pistol “For me Malc was always entertaining and I hope you remember that. Above all else he was an entertainer and I will miss him, and so should you.” ➢➢ Video: despite Fox News spoiling for some dirt on McLaren, Lydon does the decent thing “I missed him almost immediately I heard.”

❚ MARCO PIRRONI, Ants guitarist “He didn’t need to accept people who disagreed with him. He wasn’t a stroll in the park.”

❚ ANNABELLA LWIN, singer with Bow Wow Wow “He was a strange creature from another planet” ➢➢ Full interview with Annabella Lwin at EntWeekly

❚ JULIEN TEMPLE, who directed the 1980 Sex Pistols film The Great Rock’n’Roll Swindle “Malcolm was an incredible catalyst. To be in the room with him was to be bombarded with energy.”

❚ SYLVAIN SYLVAIN, founding member of punk rock band the New York Dolls “Malcolm opened up the doors for punk music around the world. He was a visionary and took what was going on in New York City and made it global. His passing represents the final chapter in an era when music was exciting.”

❚ BOB GRUEN, veteran celebrity photographer “What he really wanted was for the New York Dolls to wear his clothes, but the Dolls were falling apart at that time. They credited him with saving their lives because he put [some of them] into rehab… and revitalized them for a little while – long enough to wear his clothes.”

❚ GARY ‘MANI’ MOUNFIELD, Primal Scream and former Stone Roses bassist “What Malcolm and the Sex Pistols started was a generation of musicians who had the balls to think for themselves and challenge the normal working practices of the recording industry.”

❚ TONY PARSONS, author and 70s music journalist “Malcolm gave us our haircuts, our direction and even our clothes. He gave us our look and our swagger.”

❚ NEIL SPENCER, editor of music weekly NME 1978-85 “Malcolm was a loveable rogue, but he wasn’t always loveable either.”

❚ MARK MOORE, club deejay “The man was always such an inspiration and a real pleasure to work with. So very sad.”

“Malcolm McLaren, the former manager of punk group the Sex Pistols, has died aged 64, his agent has said. McLaren, the ex-partner of designer Vivienne Westwood, was believed to have been diagnosed with cancer a while ago. He set up a clothes shop and label with Westwood on London’s King’s Road in the 1970s and was later a businessman and performer in his own right. The couple had a son, Joseph Corre, the co-founder of lingerie shop Agent Provocateur. His agent told the BBC that McLaren passed away on Thursday morning. He died in Switzerland, according to his family. His body is expected to be returned to the UK for burial.”

Vivienne in her new spiky dyed-blonde hair and the newly graduated Malcolm in summer 1971 when he changed his name from Edwards to McLaren... They became home-makers and business partners in their first retail outlet done out as a 1950s Teddy Boy’s suburban sitting-room in Paradise Garage at 430 King’s Road, Chelsea. They named it Let It Rock and a great British subcultural saga had begun as they took over the shop, which evolved into Too Fast To Live Too Young To Die, SEX, Seditionaries, and in 1980 into Worlds End which is still there today

➢➢ Adam Ant on Malcolm “Skin like Napoleon and a nose to match” – MTV video from 1990 of Adam telling the story of how he met one of Britain’s most irrepressible cult figures
➢➢ McLaren’s Enough Rope interview for ABC TV, 2008 Q: What is it you actually do for a living? A: Somehow I remain permanently cool
➢➢ McLaren’s solo performances include the landmark Buffalo Gals video, which parodied a 19th-century US black-face minstrel standard in weird square-dancing style, complete with Westwood silly hats in 1982
➢➢ Inspiration for Madge? The Bootzilla Orchestra, Deep In Vogue, 1989

How punk bridged the class divide

❚ JON SAVAGE, music writer and author of England’s Dreaming (Faber) “That Malcolm McLaren’s death has made such an impact should not come as a surprise, as it reinforces the privileged place that punk had and still has on our national consciousness. Anyone under 40 or so will have grown up with this as a fact, but for those who were there at the time, there will always be a slight sense of wonder: how did a minority cult have such a powerful impact?”
➢➢ Read Savage’s full piece in The Independent, April 10

❚ JOHN TAYLOR on his band’s website “Before Malcolm being a musician in England meant you had to read music, and clock up years of dues and motorway miles, hours of practice and play interminable solos wherever possible. Malcolm’s attitude changed everything. Without him, no punk rock revolution, no Anarchy in The UK, no Never Mind The Bollocks. No Sex Pistols, no Clash. No Duran Duran…”
➢➢ Read on – “Just check out the playlist on the jukebox of ‘Sex’.”

➢➢ The Times of London McLaren, punk who shook up the Seventies
➢➢ New York Times “I Will Be So Bad”
➢➢ The Guardian Blood, spit and tears as the punk provocateur dies
➢➢ Financial Times Punk Svengali: “Beaten up several times during his time in the Sex Pistols, McLaren was an uncaring dilettante who treated the violence unleashed by punk as just another ironic stunt.”
➢➢ The Daily Telegraph Svengali and arch media manipulator
➢➢ The Independent Drab world of pop needs McLaren’s brand of anarchy
➢➢ BBC News “Charlatan, hustler, plagiarist and … the most evil person on earth”

➢➢ The Independent Asbestos from his punk shop “killed McLaren”