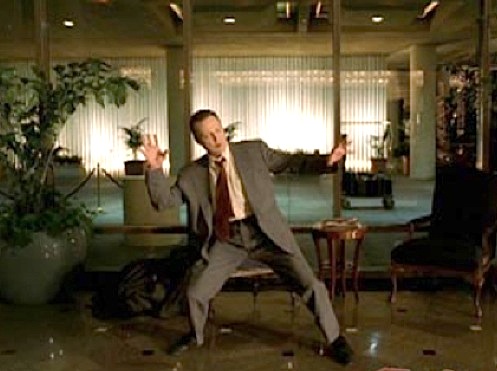 ❚ WEAPON OF CHOICE is a short video clip of a Fatboy Slim track directed by Spike Jonze. Yes, that is Christopher Walken performing a swing-from-the-rafters dance solo as a weary businessman who unexpectedly launches himself into the hotel lobby. And, yes again, Walken has a long history as a dancer, and you’ll be even more impressed with his tap-and-strip routine in the 1981 film musical Pennies From Heaven, below, which derived, clunk-click, from Dennis Potter’s Bafta award-winning BBC television drama in 1978, clunk-click-whirr, which made a star of Bob Hoskins.

But Shapersofthe80s is sending you first to UbuWeb to view Weapon of Choice because if you’ve travelled this far into the 21st century without discovering the mightiest single website for the 20th-century’s outsider avantgarde, this is your electric moment. Weapon of Choice (2001) is among the UbuWeb Top Ten videos for January 2011 selected by Paula Scher, an American graphic designer who turned out her fair share of album sleeves en route to Pentagram.