❚ MORRISSEY WAS SUPPORTING BOWIE at the L.A. forum in June 1991 when unexpectedly Bowie’s voice suddenly announced his arrival on-stage during Morrissey’s set as he embarked on Cosmic Dancer, written by Marc Bolan. This tear-jerker of a video was exhumed only this month (in 2020) showing the evident affection between the singers. Morrissey himself explains:

“ We hadn’t rehearsed the song. David called me at my hotel and we tried to duet down the phone, which became very funny because David couldn’t remember the words, but on the night it was me who forgot and David remembered. You can see a slight disapproval from him when I repeat and repeat the wrong lines … His look says ‘You shouldn’t be singing that bit again’. This clip is my 4th favourite memory of David. It’s nice that Ron and Russell [Sparks] are in there too, but Russell looks irked … I expect he was missing the concluding sequel of that night’s Columbo. ” – Morrissey 30 June 2020 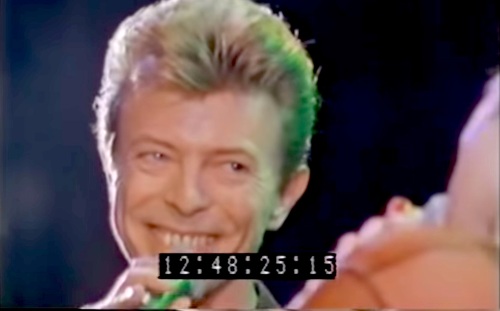