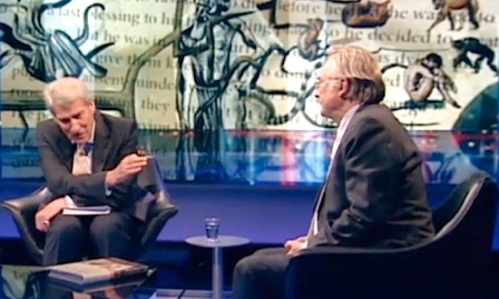 ❚ TOP-CLASS NEWSNIGHT INTERVIEW LAST NIGHT! Did you know “Darwin’s Rottweiler”, aka the evolutionary biologist Professor Richard Dawkins, could laugh? Or that British television’s one-man Spanish Inquisition, Jeremy Paxman, could even contemplate a honeyed whisper? Well not only did the pair dance through a good-humoured sparring-match about the poetic merits of fairytales and/or science — “the false” versus “the true” in the Prof’s universe — but each managed to make the other laugh.

Paxo kept the debate brisk with his cogent interventions, though when he suggested that religions tend to make societies hang together, the Prof riposted with a smile: “You don’t believe that, do you?” As rewarding a TV interview as you’ve seen in ages; nine priceless minutes well worth catching on the iPlayer.

Dawkins has written a new book called The Magic of Reality which is aimed at the young as a warning against “believing in anti-scientific fairytales”, whether those are myths from ancient civilisations or, if we need reminding, religious doctrines such as creationism. Last night’s TV parley was careful not to revisit the Prof’s pet topic published as his 2006 book The God Delusion, which he calls “probably the culmination” of his campaign against religion.

When Paxo maintained that mythology makes for better stories than straight fact, Dawkins said he wasn’t knocking storytelling, but genuinely thinks man’s evolution is more exciting and poetic than, say, Judeo-Christian myth. “We started off on this planet, this speck of dust, and in four billion years we gradually changed from bacteria into us. That is a spell-binding story.”

Some might say Dawkins the militant atheist was being unreasonably reasonable! He genially confessed he finds the Bible’s Book of Genesis affecting — “as a story, as long as you don’t think it’s true. The trouble is that 40% of the American people think it’s literally true”.

➢ The Magic of Reality: How we know what’s really true, by Richard Dawkins (Bantam Press £10) — Novelist Philip Pullman says: “It’s the clearest and most beautifully written introduction to science I’ve ever read.”

Lalla, a footnote to history

Lalla Ward and her Doctor Who, Tom Baker: on Brighton beach filming The Leisure Hive episode (1980)

❏ Prof Dawkins mentioned last night that the extracts from his book were being read on Newsnight by “Lalla”. This refers to Lalla Ward, once the wife of actor Tom Baker, the fourth and most memorable Doctor Who from the 1970s, opposite whom she played Romana the Time Lady. It was her long-standing friend Douglas Adams, a Monty Python and Doctor Who scriptwriter best known as the cult author of The Hitch-Hiker’s Guide to the Galaxy, who in 1992 introduced Lalla to his good friend Dawkins, and they married within the year. The joker and the boffin had formed a brilliant Doug & Dick double-act, appearing at sci-fi and no-fi science gatherings where they would robustly debate the merits of technology (Doug) and evolutionary theory (Dick). Not many people know that apart from being a nifty illustrator, embroiderer and knitter, Lalla makes all of hubby’s batik ties which are decorated with zoological imagery. Last night he was wearing one showing a fierce bird of prey diving to the attack.

➤ Rottweiler Dawkins croons his way into our hearts and minds

❚ IT’S NOT RAP AS WE KNOW IT, but here’s the music video of the week — Professor Richard Dawkins crooning his anti-creationist taunts like some born-again Craig David. Also known as “Darwin’s Rottweiler”, Dawkins is one of 10 distinguished thinkers remixed into song to spread enlightenment in A Wave of Reason, a musical compilation of soundbites preaching spiritual fulfilment through scepticism. It’s either shrill or lethal depending on your viewpoint, but does teeter on the brink of characterising the boffins as just as zealous as the believers. In its first three days online this vid has scored 120,340 views! (Click through to YouTube to read the “lyrics” in full. And yes, that is Darwin’s tree of life sprouting at 1:55.)

This is the seventh instalment in the Symphony of Science music video series, which aims to bring scientific ideas to the public in a novel way, through the medium of music. The mission of John Boswell, its Washington-based producer, is to fight people’s growing and irrational addiction to such pseudosciences as astrology and homeopathy. A sad paradox of the first era to be driven by digital technology is that scientists find it necessary to stand up and actively argue that a scientific worldview is as enlightening as blind faith!

Boswell, an electronic musician, was inspired initially by the American cosmologist Carl Sagan who became a global TV superstar during the 1980s, and the series has grown to embrace many other popularisers such as David Attenborough, in distinctly less strident vein than this week’s effort. In January Attenborough starred in The Unbroken Thread, a beautiful and lyrical tribute to planet Earth. Other eggheads in the series include Brian Cox, Jacob Bronowski, Bertrand Russell, Sam Harris, Michael Shermer, Lawrence Krauss, Jane Goodall, Carolyn Porco, Richard Feynman and James Randi, the stage magician and notorious sceptic best known for challenging the “woo-woo” of the paranormal.

➢ Richard Dawkins is an atheist and critic of creationism and so-called “intelligent design”
➢ Join the Brights movement where the worldview is free of supernatural and mystical elements
➢ Dip into The Third Culture at edge.org where the world’s leading scientists, artists and creative thinkers answer a new Big Question every year — in 2010 it was “How is the internet changing the way you think?”