➢➢ VIEW ♫ ♫ Get Outta My Way! – Ropey iPhone video of Kylie’s next single live at Heaven this morning, but a visual feast, jam-packed with energy:

❚ AN EYE-POPPINGLY CREATIVE LASER SHOW capturing every colour of the rainbow was hurled towards a bouncing audience of Londoners in the early hours of this morning at Heaven. A euphoric Kylie Minogue was making a surprise 40-minute PA in the sweltering heat of high summer. This week she launched her 11th studio album in the UK, the dance-driven Aphrodite which marks her return to joyous pure-pop, and moves her on from the tragic events of adult life she calls her “dark period”. 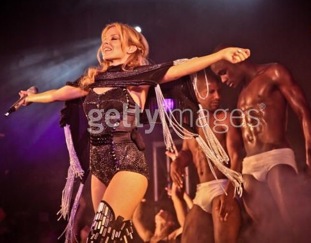 According to host Jeremy Joseph, Aphrodite had gone straight to No 1 in the album chart – her fifth No 1 album – and he produced a multi-candled cake by way of congratulations. He also reminded us all that this was Kylie’s tenth appearance at London’s G-A-Y venue since its predecessor Bang! became the mainstream gay mega-clubnight that virtually launched Kylie’s British pop career in 1988. Since then the Australian-born singer has become the most successful female artist in the UK charts and the second richest British popstar from the 1980s.

Onstage from 1.35 this morning she performed six numbers in a clingy-and-swishy shredded gold Cinderella dress plus golden knuckle-duster, then three encores in a bewitching mirrored black top with thigh-high Puss-in-boots, climaxing with her erotic new single All The Lovers elegantly framed by five of her beefcake dancers and as many more females. Heaven had, perhaps foolishly, handed out whistles to everybody in the audience, so whether you could hear Kylie’s vocals above the non-stop barrage became slightly theoretical – a fact she accepted by just letting the audience get on with the verses as well as choruses to almost every number.

When asked in a recent interview with Popjustice if Aphrodite would make a good farewell album, 42-year-old Kylie responded: “I think so. It’s joyful. It’s like the jus of all the best bits of my musical career.” We also discover exactly what “a Kylie moment” is.

Kylie’s own tweeted pix: backstage at G-A-Y with her female dancers, and with the monster teddy presented by Jeremy Joseph to mark her becoming an auntie for the third time

➢➢ VIEW ♫ ♫ Delectable rendering of All The Lovers – Kylie Minogue on the Jonathan Ross show, June 25, 2010 (spot Dawn Joseph and David Tench in support) – Oops, this has been removed from YouTube. Instead here’s her UK TV performance one month later with Alan Carr:

❚ ONLY THREE MUSICIANS FROM THE 1980s are included in the annual Rich List of Britain’s top 50 music millionaires, published today by The Sunday Times. The richest musician of the decade who holds his own amid the older gods of rock is singer-songwriter George Michael who is worth £90m ($138m) today. He sits at No 25 in the ST’s top 50. George is pictured above in Wham!’s Club Tropicana video (where “the drinks are free”). His group’s “pure pop” epitomised the sybaritic style which by 1983 was signalling the divide in British music between electronic earnestness and full-on hedonism.

The other two richest stars from the 80s are each estimated to be worth a relatively puny £35m ($54m). They are Lancastrian Mick Hucknall of Simply Red (their summer tour climaxes with a farewell concert on Dec 19 and is booking now), and pop diva Kylie Minogue who found fame in the UK through the Australian TV soap, Neighbours. The Sunday Times justifies Kylie’s presence in this UK list, as someone who often seems “more British than the British”. She herself has regarded the UK as “my adopted home” almost since 1988 when her debut single, I Should Be So Lucky, went to No 1 and set her on the path to becoming the most successful female artist in the UK charts. She was honoured by the Queen with an OBE in 2008.

Since the 2009 Rich List, three 80s stars have dropped out from the top 50 musicians: Annie Lennox, Simple Minds vocalist Jim Kerr and Sade – though her sensational album comeback this year is likely to be reflected in next year’s list. Astonishingly the creative genius behind Kylie and the huge stable of Stock Aitken and Waterman acts – Pete Waterman – last appeared in the Rich List in 2007.

Should we assume creativity does not equate to profitability? From a musician’s perspective the 80s have been the least lucrative decade in pop history, apart from the Noughties from which only TV impresario Simon Cowell emerges as a multi-millionaire (£165m). Inevitably, older musicians have had longer in which to sell records and accrue proceeds, so the 1960s yield 20 musicians in the Rich List who are still millionaires today, led by Sir Paul (£475m, $731m), Sir Mick (£190m) and Sir Elton (£185m). From the 1970s there are ten in the top 50, with Sting way out in front (£180m).

Among the richest artists from the 90s is Victoria (“Posh Spice”) Beckham (£145m whose fortune the ST oddly entwines with her footballing husband’s). Robbie Williams is now worth £85m and Gary Barlow £35m – both started out in boyband Take That. The Gallagher brothers of Oasis are worth £55m, and Jay Kay of Jamiroquai £35m. 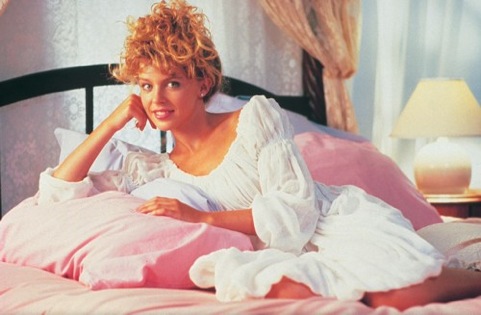 Getting lucky in 1988: Kylie went straight to No 1 and never looked back. Photograph © by PAL Productions Ltd

The Rich List names 13 moguls ruling the UK biz, led by former songwriter and Warner Music Group chairman, the American Edgar Bronfman who has made his home in London, and is worth £1,640m ($2,522m). The ST reports him as being “well placed to snap up the beleagured EMI”, effectively Britain’s last homegrown record company, founded in 1931.

Leaders among the younger British businessmen are Simon Fuller (£350m, $540m), the former Spice Girls manager who struck gold as creator of TV’s Idol franchise which has been sold worldwide during the past decade, and Jamie Palumbo (£150m, $231m) who founded the Ministry of Sound clubbing empire.