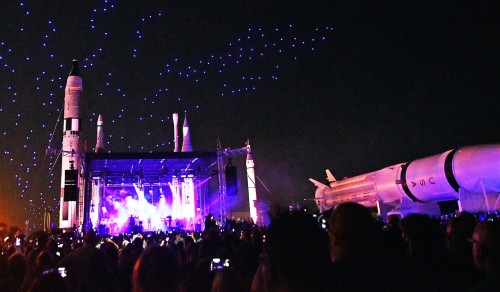 ◼ WHO ELSE BUT DURAN DURAN – whose debut hit in 1981 was titled Planet Earth – could the Kennedy Space Centre in Florida have chosen to celebrate the 50th anniversary of man’s journey to the Moon in Apollo 11 when Neil Armstrong and Buzz Aldrin walked on its surface? On Tuesday the Rocket Garden at NASA’s primary launch centre at Cape Canaveral saw Duran Duran climaxing the Apollo 50th gala day of special events with a headline concert backed by a 16-piece orchestra and 12-voice choir, plus 300 Intel Shooting Star drones flying in formation overhead.

Performing before the Saturn 1B launch vehicle and a platoon of iconic space rockets, Duran were watched by all the surviving astronauts who have walked on the Moon since 1969, plus an audience who had paid $300 a ticket to support the Aldrin Family Foundation. Obviously the British band kicked off with The Universe Alone, followed by a selection of their space-themed hits including Planet Earth, New Moon On Monday, Anyone Out There, Astronaut, and Ordinary World. The Brummie boys capped their 90-minute show with their biggest hit Rio.

Keyboardist Nick Rhodes, who had watched the Moon-landing on TV as a seven-year-old, said: “It was surreal and awe-inspiring. Science-fiction unfolding before us, opening our minds to what mankind was capable of achieving.”

Duran Duran at Cape Canaveral: playing their space-themed hits to honour the 50th anniversary of the Apollo 11 Moon launch. (Getty)

❏ KSC setlist – The Universe Alone, Planet Earth/Space Oddity, Anyone Out There, Astronaut, Ordinary World, (Reach Up for the) Sunrise, Walking on the Moon (Police cover), Wild Boys, Hungry Like the Wolf, Come Undone, Notorious, Pressure Off, White Lines (Don’t Do It) (Grandmaster Melle Mel cover), Girls on Film, Save a Prayer, View to a Kill, Rio.