2015 ➤ Another three days inside the head of Shia LaBeouf

Dozing off: Shia LaBeouf viewing #allmymovies this week in NYC 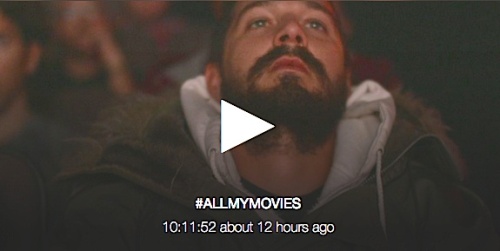 ◼ ZZZZZZ!!!!! You may have just missed the latest immersive real-time art project from the compelling marriage of Hollywood and bleeding-edge European art, as manifested by the LaBeouf, Rönkkö & Turner collaboration.

Shia LaBeouf, the very #Iamsorry Californian film star with artsy pretensions, has just spent three days in New York City inviting fans to sit with him through #allmymovies – or at least, all those he has made in the past two years with the ex-St Martin’s luminaries Nastja Säde Rönkkö (Finland) and Luke Turner (GB) under the banner of metamodernism. (In May Central Saint Martin’s graduates enjoyed the LRT treatment of this year’s highly metamodern BA degree show with a live stream of #introductions in which Shia declared “Something has happened. Beauty is at work”.)

This week’s live stream from NYC finished last night but you can still catch up with Shia’s ordeal at New Hive or take the easier route by viewing individual projects at the LRT campaign website.

ON THE ELITISM OF THE FILM INDUSTRY

Several times in the interview, LaBeouf and his collaborators discuss the elitism of the art world. However, as LaBeouf asserts, it’s an attitude prevalent in the film industry, too. “The movie world is just as elitist. I get emails from people in the movie world, people telling me, ‘You gotta maintain mystery.’ But truth will always find its way out there. Sincerity is the new punk rock.”

WHAT THE PROJECT DID FOR HIS SENSE OF SELF-HATE

“Despite battling with those negative feelings beforehand, afterwards it was clear that the effects of the project were entirely positive. “I walked out loving myself,” he says. “Not in some grandiose, ‘You’re fucking awesome’ way, but like (I was) part of a community. You’re a part of this human thing. You’re in this human thing. I’ve always felt as though, ‘I’m just an animal in this human thing. And I’ll play the human game. I’ll wear the human mask.’ But coming out of there, it’s the first time I’ve actually felt part of this – it was very humanising for me. I walked out loving myself.”