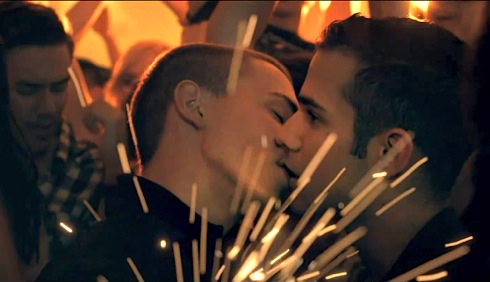 ❚ YESTERDAY KATY PERRY’S SINGLE FIREWORK finally fell out of the UK singles chart after 58 weeks, having left the US Billboard Hot 100 last July after 39 weeks, and selling 4.7m copies in the US. To date, the video has been viewed 253m times on YouTube, and picked up MTV’s video of the year award.

Despite depicting fireworks shooting from Perry’s chest, this daft yet lavish and cinematic promo video shot in Hungary was censored for British television because it captured the fleeting kiss shown above between two young men. Yet many another video has failed to raise such outrage. A year ago when Firework had reached No 4 in the UK chart, Shapersofthe80s went in search of 19 gay kisses in pop that did make it past the censor.

The UK leg of Katy Perry’s California Dreams Tour 2011 returned to the UK at Sheffield in October and ended in Dublin this week.